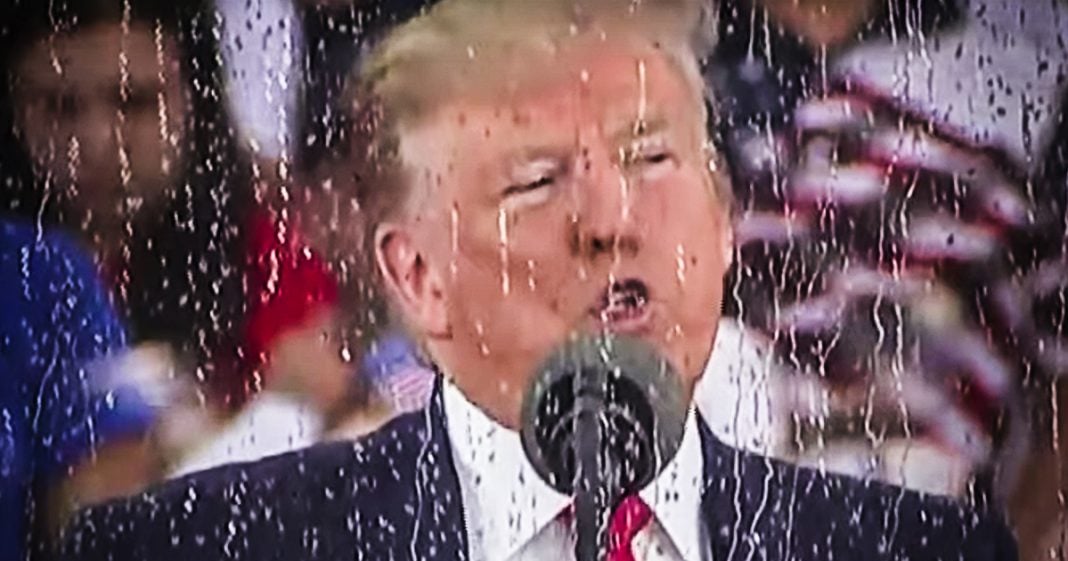 During his Independence Day speech, Donald Trump said that US soldiers helped to defeat the British by taking the airports…in the 1700’s. Obviously airports didn’t exist back then, and Trump came across looking like a fool. But never one to accept the blame, he told reporters after the event that the teleprompter malfunctioned and that’s why he started saying stupid things. Ring of Fire’s Farron Cousins discusses this.

Well, I know it’s been a few days since Donald Trump’s very bizarre, 4th of July, a speech during his salute to America with his tanks and his blue angels and all that nonsense. But we absolutely have to talk about what that man said during that speech. Here is exactly what Donald Trump said. He said,

“Our army manned the air. It rammed the ramparts. It took over the airports. It did everything it had to do, and at Fort McHenry under the rocket’s red glare, it had nothing but victory.”

Right after we took all those airports, right, it was at the big siege of Atlanta where we took over the massive Delta hub. Is that what it was? Well, of course Donald Trump has never one to admit that he made a mistake, which he obviously did. Seeing is how the air force and airplanes and therefore airports did not exist in the late 1700s. I mean, they were, you know, pipe dreams by crazy, uh, people from the renaissance. We never thought we would fly. So Donald Trump did what Donald Trump does best, and he came out on Friday, the day after this ridiculous speech, and he lied about what actually happened and here is what he said, here is who he blamed. We had a lot of rain. I stood in the rain, the teleprompter went out, it kept going on, and then at the end it just went out. It went caput actually right in the middle of that sentence, it went out. And that’s not a good feeling. You’re standing in front of millions of millions of people on television, and I don’t know what the final count was, but that the crowd when all the way back to the Washington monument and you see what this idiot just in, first of all, he’s like not teleprompter went out.

He said, well, yeah, I mean it actually went out in the middle of that particular sentence and you know, God, there’s tons and tons of people watching this. Millions. And I mean, I could see him all the way as far back as the end of the mall, and I’ve already taken you off the topic, right? That is one of the powers that this man has about the only thing he does well, the Misdirection, the distraction that taking you down a rabbit hole so that you forget why you were even looking at the other rabbit hole in the first place. That is a gift. Not many people have that, but this man absolutely does, but it doesn’t change the fact that he’s also a complete moron. You know, maybe, maybe there was a teleprompter malfunction, but at the same time he also told us at the end I knew the speech very well, so that’s why the teleprompter malfunctioning bother me and trust me, have done plenty of TV.

Teleprompters do in fact mess up quite frequently, but I would have to imagine that the teleprompters for the president of the United States would be a little bit better than, you know what we may have in our TV studio, right. Probably a little bit better than what you’re going to find at your little local news station. Again, it’s the president of the United States, the entire world is watching. Don’t you think maybe you can have some kind of fail-safe in there. I mean, they had the big plexiglass thing up so that he wouldn’t get wet and didn’t in fact have to stand in the rain. I’m pretty sure they had some kind of a redundancy in place to prevent any kind of teleprompter failure. Let’s also not forget that this is a man who mocked every other person on the planet who has ever read from a teleprompter saying it’s because they can’t remember a speech.

Why? I don’t ever remember Barack Obama saying, uh, that the revolutionary war was important once we captured the airports. I don’t remember United Airways flying over the country back then or reading about that in the history books. I don’t see that in any pictures from the revolutionary war, except of course, obviously all of the memes that have popped up since Donald Trump’s stupid speech on the 4th of July. But that’s what this man is. He is a human gaffe machine, and the press should have called them on this, but as usual, the let him sit there, tell his lies, and then go back and just say, oh, no, no, no. He said, the teleprompter went out. No, he lied to you because he understood that he looked like an idiot.