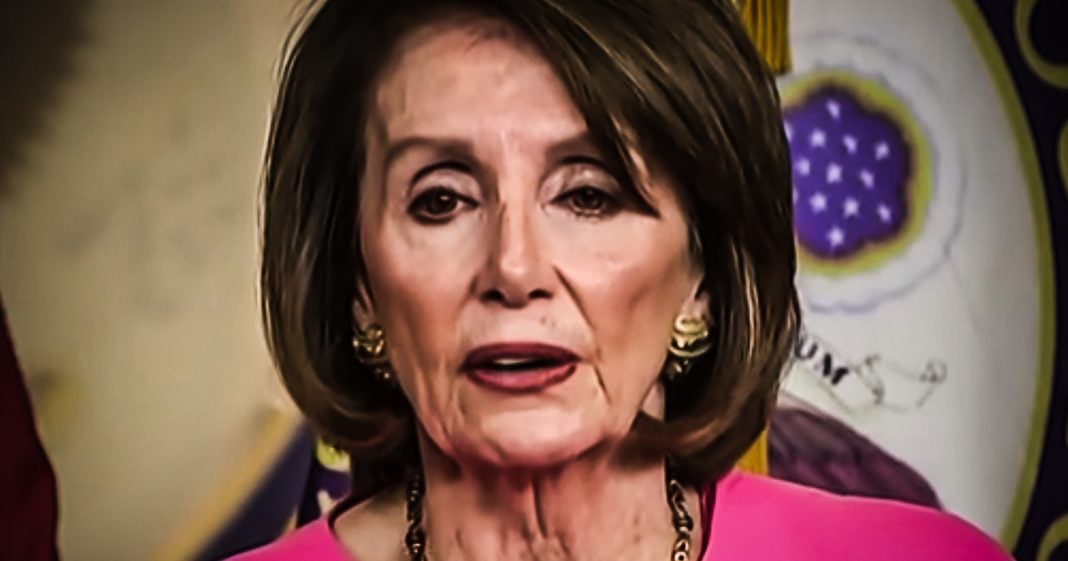 Speaker of the House Nancy Pelosi is letting her true colors show. During a recent interview with Maureen Dowd of The New York Times, Pelosi shot back at Freshman lawmakers Alexandria Ocasio-Cortez, Ilhan Omar, Rashida Tlaib, and Ayanna Pressley saying that they might have a good Twitter following but that’s all they have. This is incredibly insulting and dismissive to the future of the Democratic Party, a future that obviously Nancy wants to fight. Ring of Fire’s Farron Cousins discusses this.

How Speaker Nancy Pelosi loves to go on the attack. But unfortunately, most of her attacks, at least those for the last six or seven months, have not been against Donald Trump. They have not been against Republican obstructionist in the House of Representatives and they haven’t been against some of those centers. Democrats we have representing us who would more, uh, feel more at home right there in the Republican Party. No Pelosi’s attacks really over the last seven months seem to be focused on a core group of freshmen, democratic progressive women, Alexandria Ocasio-Cortez, Ilhan Omar, Ayanna Pressley, and Rashida Tlaib to be exact. Recently Nancy Pelosi sat down with Maureen Dowd from The New York Times and when doubt asked her about these four women who voted against Nancy Pelosi’s deal. She worked out with Donald Trump for a border funding. Nancy Pelosi dismissed these four women who have had a huge impact on politics already and said, oh, it’s like four people.

Oh, who cares? Just four people. And yeah, they may have a big following on Twitter or whatever, but that’s all they have. That’s what Nancy Pelosi said. These four women who have come out newly elected, you know, only six months in office or so, absolutely changed the narrative, changed the focus in Washington DC and the Democratic Party for the better. They’re out there actually working on things. They’re visiting these migrant detention facilities that we have on the border, documenting the horrid conditions, telling the public about them coming up with great ideas like the green new deal supporting Medicare for All. Oh, and they also all four supported Nancy Pelosi in her bid to be speaker again when Democrats won back the house and Pelosi has repeatedly attacked them. Now Pelosi’s chief of staff was out on Twitter this weekend, I guess attempting to do damage control, but instead he was just being a jackass to anyone who brought this story up, said, Oh, you’re taking it out of context.

You didn’t read the whole quote. Well, here’s the thing, man, we don’t have to, you want to talk about context. Let’s talk about the fact that this is what Nancy Pelosi has repeatedly done to have this group of women since the 2018 midterm. It doesn’t matter what the context was in which she was speaking to Maureen Dowd for this one specific quote, because we can look back at the historical context and see that this has become a pattern of behavior for Nancy Pelosi to go after these four women. Few months ago when Nancy Pelosi was asked about the progressive wing of the Democratic Party, you know, pushing the party to the left. Nancy Pelosi responded, what that’s like five people, literally her response, that’s like five people, and the Green New Deal, or she calls it the green, whatever. It’s awfully dismissive and derisive, right? This is what Pelosi does, although you can’t criticize her, right? Because we all got to fight Trump in any kind of, you know, division in the Democratic Party is just awful. Bull. Nancy Pelosi’s done. Nancy Pelosi should be out. Nancy Pelosi is not the fighter we need. The fighter we need is going to focus the fight on Donald Trump and the Republicans and on actually passing policy, which is pretty much exactly what these four progressive, uh, women are trying to do. And Pelosi is the one standing in the way, but hey, she did give us that great little clap. Did Donald Trump and the state of the union so right. She’s totally on our side because she did that.

I’m not kidding you. You’d go online. You see people making those arguments. I wish she did the clap. Y’all. God Damn like seriously pissed me off with this. Nancy Polosi is not a good leader. We knew that going into this, but you know what we said, okay, we’re going to give you one more shot and maybe things are different. While they’re not, she is spending more time attacking members of her own party. Then she is working on legislation. Then she is fighting against Republicans who want to lock kids in cages or fighting against one of the most corrupted administrations I’ve seen in my lifetime. She would rather go after these four progressive women because they represent a threat and that threat is change to the party that Nancy Pelosi has been attempting to lead and failing at that for years. They’re the future. They’re the new generation of leaders, but Nancy Pelosi’s is not ready to pass that gavel yet and she wants to have some kind of legacy, but her legacy after this speakership, much like her speaker, a legacy after the last one is going to be somebody who really didn’t accomplish much of anything at all.

I’ll end with this. Let me ask you all this question. What does Nancy Pelosi stand for? What’s her position on the biggest issues in the day on healthcare, on impeachment, cause she’s calling back and forth on that too, on the migrant detention facilities, on climate change, student loan debt. Let’s get, go on. Tell me without having to look it up or dig through her website where she actually stands on those issues. If she were a true leader, we would know off the top of our head because these other four women, AOC, Tlaib, Pressley, Omar, we know where they stand on all those issues. Pelosi, just a big giant question mark at this point.