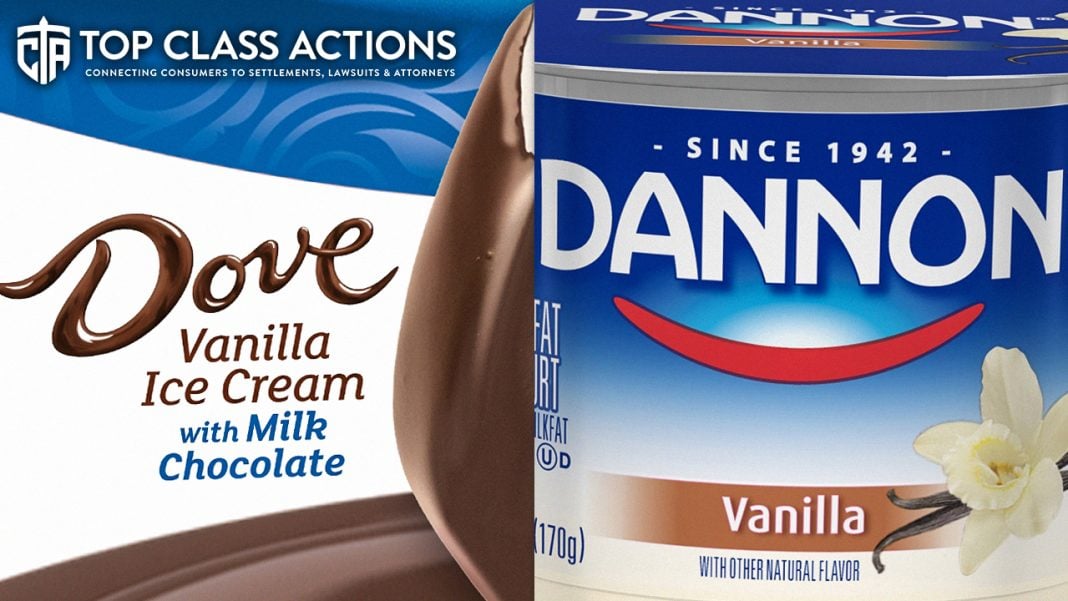 Two separate class action lawsuits have been filed, targeting companies over the vanilla content of their products. Mars Wrigley Confectionery falsely advertises its Dove ice cream bars as being made with vanilla ice cream, when the actual product doesn’t contain real vanilla, and a class action lawsuit claims that Dannon falsely labels their yogurts as containing more vanilla than they actually do. Ring of Fire’s Farron Cousins discusses this with Scott Hardy from Top Class Actions.

Farron Cousins:                  Believe it or not, American consumers are really not that complicated. All we want when we go to a grocery store, supermarket, big box store, whatever it is, whatever we purchase, we just want to know that what we’re purchasing is in fact what we’re purchasing. I mean really, it’s that simple. That seems like a very simple concept. Yet unfortunately, time and time again, corporations are betraying our trust and not actually giving us the product that they’re advertising on the packaging. And this is yet another one of those stories.

And I have Scott Hardy from Top Class Actions with me to explain what’s happening. And Scott, of course, I am talking about Dove ice cream bars and Dannon yogurt, both actually separate class actions let me point that out, but both similar allegations as to what these companies are doing. So let’s start with Dove. What’s happening here?

And so what they’re doing is they’re trying to go ahead and state that it’s vanilla ice cream or vanilla yogurt and that there’s natural flavors. But instead of having a whole lot of real vanilla and a very little synthetic vanilla, they’re using almost all synthetic vanilla and very little real vanilla bean because that’s just much more expensive. And if you use synthetic vanilla that extends that vanilla tastes. And so it really obviously makes it taste more vanilla without having to spend the extra money of getting those vanilla beans.

I mean, again, go to a grocery store and try to buy a couple of pods of vanilla. You’re typically going to be paying roughly a dollar or more per pod. Again, these things are not cheap. So all of these products out there claiming, oh, we’ve got real vanilla plus maybe some other natural flavorings. You could probably go ahead and put your money on the fact that there’s not going to be very much, if any, real actual vanilla bean paste in these products here.

Scott Hardy:                          Exactly. I mean, both of these articles so far have received more than a thousand comments and there, there are a lot of viewers out there that are upset because when they buy a product and it says contains vanilla and other natural flavors, they are thinking that it’s, you know, not a healthy product. Right. This is dessert. Where in the, in the Dannon yogurt, they’re really hoping it’s a healthy product. But they’re hoping that they’re, they’re not filling their bodies with these synthetic ingredients.

And unfortunately what these companies are doing, both Dannon and Dove, according to these two class actions, are using that synthetic vanilla to really eek out that vanilla taste. Now is their real vanilla in them? Yes, there is, there is, where there’s no contention here that there is real vanilla in the Dannon vanilla yogurt and in the Dove chocolate bar. But that question is how much real vanilla and shouldn’t you go ahead and state that this is, yes, it’s made with real vanilla and a lot of synthetic vanilla? That should be somewhere on the label, I would think.

Farron Cousins:                  Well, exactly. I mean, it amounts to basically trace amounts of real vanilla bean in, in the product. So, but, but you really hit it on the head right there. Consumers pay a premium, or even if the price is the same, they’ll make the determination to purchase a product that is natural versus one, maybe it says, you know, vanilla flavoring or vanilla flavored yogurt. You’re going to go for the one that says made with real vanilla. This is a way to get con, I mean, that’s why they put it on the package.

I mean, let’s be honest about that too. That’s why it’s even on the package. It is marketing material. It gets people’s eyeballs to it and that’s how they’re able to sell it. So, yeah, you know, I, I do believe in both these instances, these consumers have a real case here because these companies, both, you know, with Dove and Dannon were able to increase their sales based on this particular claim that, you know, by the evidence we have doesn’t seem like it’s a very accurate claim here.

Scott Hardy:                          Exactly. And, and I think what we’re going to see from both these class actions is we’ll see the labeling updated and hopefully we’ll see some money put back in the consumer’s pockets who are paying extra for that all natural and all that extra vanilla labeling on that they’re paying for.

Farron Cousins:                  Absolutely. For more information on this issue, please follow the link in the description of this video, head to topclassactions.com and make sure you sign up for their weekly newsletter, Scott Hardy, Top Class Actions. Thank you very much for talking to me.