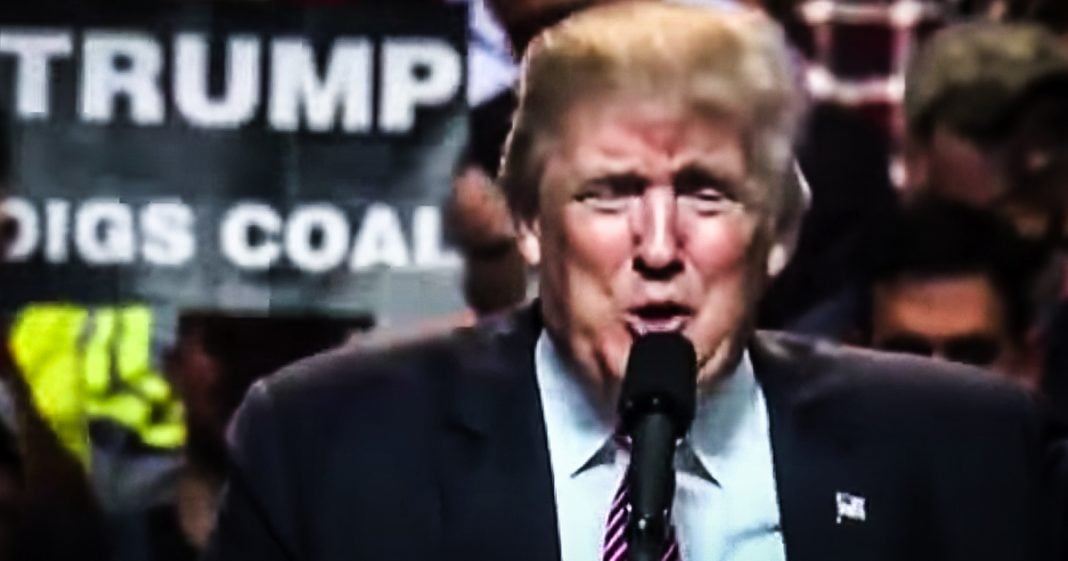 Several coal companies announced this week that their financial situations have deteriorated so badly that they will be filing for bankruptcy and likely cutting thousands of jobs. Trump swore that he would “save” the coal industry from the so-called War on Coal that Obama launched, but that entire War on Coal was a myth, and what’s really killing the coal industry is a lack of demand. Ring of Fire’s Farron Cousins discusses this.

Donald Trump ran for president as the guy that was going to save the struggling coal industry that has ever since the year 2012 been shedding jobs and losing money like crazy. But in 2016, Donald Trump in numerous different speeches and campaign pitches told us that he was going to save coal. He was going to reverse the Obama administration’s alleged war on coal that had apparently been waged for eight years now about that war on coal. Though, you know, before I get into the issue here, for many, many years, I was writing for d smog Desmog Blog and uh, every couple months I would have to do a story about this alleged war on coal and how it didn’t exist and how you even had CEOs of coal companies admitting it didn’t exist. How Obama was actually pretty damn friendly to the coal companies. And the fact that that had nothing to do with the coal industry’s decline.

You know, his clean power plan is not what contributed to coal companies declined. What contributed to it. I wrote about this years ago and we’re finally starting to see some of the various severe impacts of it is decreased global demand and domestic demand for coal. Everybody’s moving on. Coal has been burned as a source of fuel and energy in this country for well over 200 years. And finally starting just a few years ago, the public started to wake up. They realized one that we can’t deny the reality of climate change anymore. We can’t deny the science, but most importantly there’s better sources of energy out there that aren’t going to kill us either trying to mine it or by burning it and then we’re good. And then suddenly the whole world woke up and said, you know what? Maybe it’s time to get off coal. 200 years is enough, especially considering all the energy advancements that have happened in those 200 years, and that’s what’s killing the coal companies. But back to the main issue here, and we’ll get back to that part in a moment. This week, two massive coal companies announced that they were filing for chapter 11 bankruptcy, which puts close to 2000 jobs. In this country at risk of being cut. And let’s be honest, those roughly 2000 jobs will be lost within the next 12 months. These companies are hundreds of millions of dollars in debt. The two companies are Black Jewel LLC and Revolution Energy LLC in West Virginia and Wyoming.

Hundreds of millions of dollars in debt. They owe that money to the State Department. They owe that money to the states themselves where they operate and they can’t pay it because the demand for coal has dropped. And that’s where people need to understand Trump coming in and say, is going to save the coal industry by repealing regulations. Regulations aren’t what have killed the coal industry. It’s a of demand. The free market literally killed coal and it’s a death that was long overdue. But the problem of course is that now we’re going to have 2000 people who aren’t going to have jobs. They do deserve our sympathy and they do deserve our help. And here’s the bigger problem with that. We had the means years ago to start switching from coal to renewable energy and rather than suddenly these 2000 people finding themselves without jobs, we could have transitioned them. We could have trained them. These 2000 jobs wouldn’t be lost in the next 12 months because those 2000 people would already be working, putting together solar panels or windmills or a new energy infrastructure that harnesses clean energy and delivers it to cities.

We wouldn’t have to worry about people losing their jobs because we would have already transitioned them years ago, but we didn’t. We let the Republicans, Mitch McConnell was their leader because obviously Kentucky and other big coal state that has also seen the demand for coal and the production of coal dropped by tens of millions of tons per year. We let those idiots tell us that Obama was killing coal and we got to bring coal back. We’ve got to save your jobs. We’ve got to send you back down to those mines. And we’re also cutting compensation for black lung too. So be careful out there, but the Republicans did this. This is a uniquely Republican decision to keep us on these forms of fuel to prevent these workers from being able to transition into a new renewable energy economy. That was the Republicans, and now we’ve got to do something. We either let these 2000 people in the thousands more in the coal industry who are going to lose their jobs for the end of the year. We either let them go hungry. We either let them have to go on welfare or unemployment, or we start today and work on creating a government sponsored public works project that transitions these people from the coal industry to the renewable energy industry. And that is the only viable option, not just for these workers, but for the actual future of this country itself.