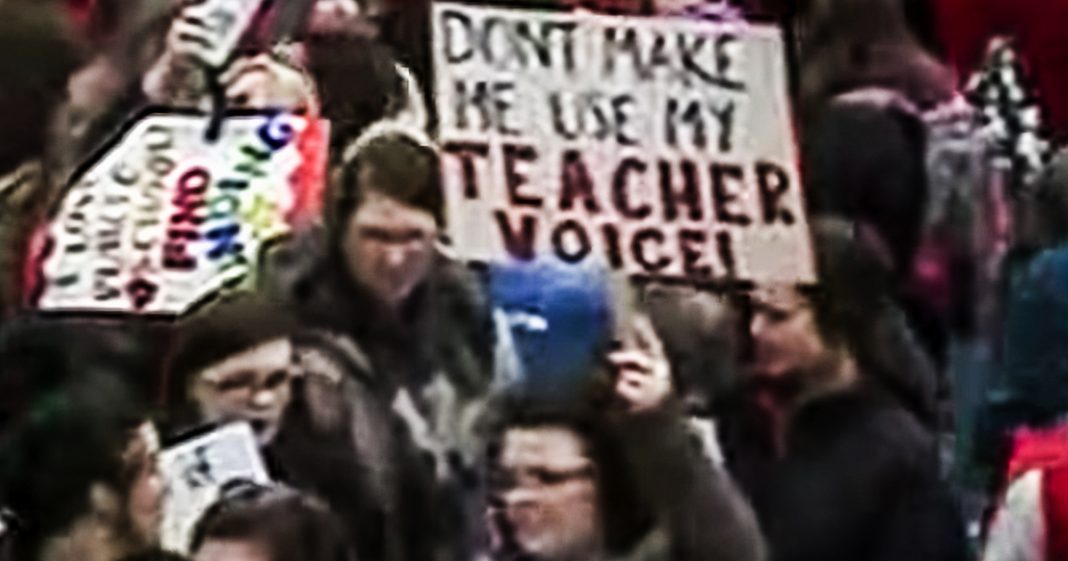 According to new statistics, one in six teachers in the United States have been forced to take on second and sometimes even third jobs just to make ends meet. This is not acceptable for professionals who are in charge of educating the future leaders of this country, and it severely reduces the quality of teachers that we see in the classroom. Ring of Fire’s Farron Cousins discusses this.

Bernie Sanders has come under fire from Republicans recently for suggesting that we should pay all teachers in the United States a base salary of $60,000 per year. Now for some areas of this country that’s not going to be that much of a raise for teachers and areas like the area where I work and where my wife happens to be an educator that would almost double her yearly salary. And the reason this is important and the reason I love the fact that Bernie Sanders is even proposing this as, because a new study came out showing that 16% of public educators here in the United States public school teachers, 16% have to take on second jobs and not just over the summertime when they’re not working and maybe get a little bored or maybe that paycheck that they get that has to cover three solid months doesn’t actually cover three solid months.

These are people that have to take second jobs after teaching. At the end of the day, they spend eight hours at school. They don’t get paid for the full time and then they have to clock out and go work a second job just to make ends meet. I have seen countless people on social media bitching about Bernie Sanders plan. It all starts in, my wife is a teacher. They all say, which kind of cheapens when, I have to say my wife is a teacher, but nonetheless they’re out there saying this and that’s ridiculous. She were makes a great living. Doesn’t have to have a second job. This is nuts. You’re wrong. That’s fantastic. If it’s true, I don’t believe any one of you. How about you go become a public school teacher in the state of Alabama and see how that $27,000 a year base salary works out for you in some areas that’s even less than that. I were literally paying some teachers in this country, poverty wages, and do you know what that does to the quality of education that our students receive? Not only do we have teachers that some of them by working a second job have to work 13 1415 hour days, very little time to rest. They also have very little time to plan,

To map out where they want to go with their students to spend extra time working with their students. And you may say, why don’t kiss on my kid? Why? Why should I care? Because that kid that they don’t have the time to work with, had somebody spent the extra five, 10 30 minutes with that kid, maybe it’s something would have finally clicked with them with that lesson and they would have understood it and they would have felt a little more confident. Maybe that kid could have grown up to cure cancer as Republicans love to tell us about kids that get aborted, you know? Oh, that could have cured cancer. No, no, no. The people that could cure cancer in this country right now, it’s just that you’re not taking care of them. You’re not funding our schools properly. You’re not our teachers properly. You’re overworking them, underpaying them, and then you’re mocking them. When a politician like Bernie Sanders comes along and says, I have an idea that we should pay these people living wage instead of paying them as if they were glorified babysitters because they do so much more than that. The future is in the hands of these teachers. That is the kind of public trust that we put into them. Go out there and prepare the next generation of leaders and we’re sorry, we’re not going to give you the resources to do that.

That is a failure here in the United States. It’s not just failing teachers. It’s not just failing those particular students. It’s failing the future itself by paying these teacher crap wages to the point where the very best ones don’t even want to do it anymore because they can’t even support themselves on those wages. Increase the pay, increase the resources headed to our public schools and watch how quickly and for the better the future changes.