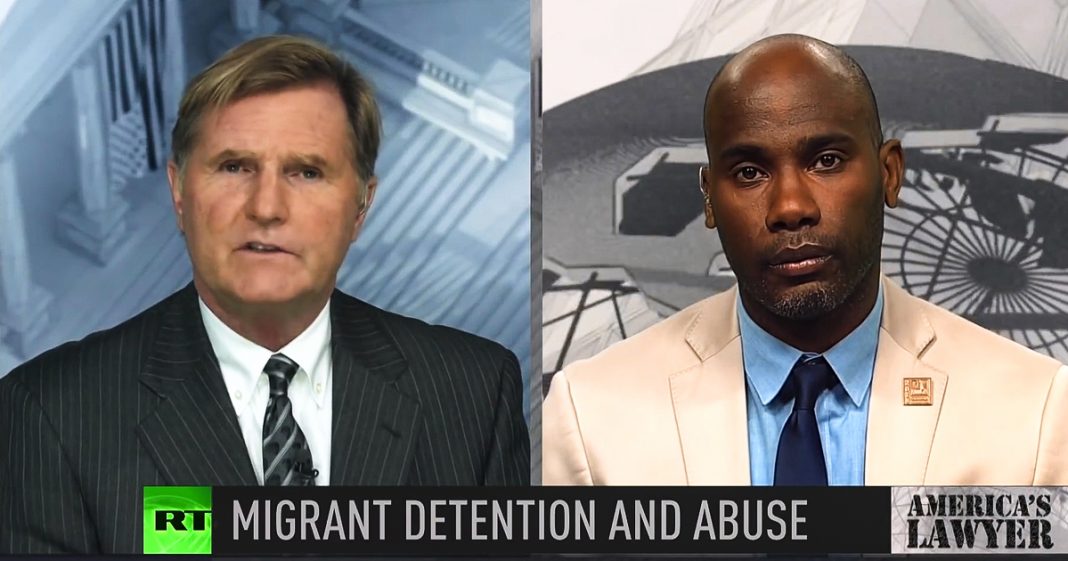 Via America’s Lawyer: VP of American Immigration Lawyers Association Allen Orr joins Mike Papantonio to give us a breakdown of just how many migrants and their children have been targeted by Trump’s ‘zero-tolerance policy,’ which has separated thousands of children from their families along the southern border and relocated them to squalid detention centers spread throughout the country.

Mike Papantonio:             One year after the Trump administration began its aggressive crack down on Southern border crossing several states, including California, Texas and Arizona are pursuing legal action against the federal government for its mishandling of juvenile detainees. Tens of thousands of these children are being held in what many call deplorable conditions. This of course, after being separated from their parents at the Southern border and being transported to detention centers. Joining me to talk about this is Allen Orr VP of the American Immigration Lawyers Association. Allen, just how many of these juvenile detention centers are we talking about and, and around how many children are currently being held?

Mike Papantonio:             You know, Allen, one thing that you keep hearing in the, you know the, when you take a look at these stories, there’s always that argument that gee whiz, what Trump is doing is no different than the policy that Obama had in place for eight years. And if you look, if you put side by side their two policies, there really is very little difference. And maybe you can help maybe, maybe can you explain that? What are the differences and why is this different other than the fact that we have far more migrants coming into the country right now? What are the differences? Because I’m not, I’m not seeing it. Maybe you can help with that.

Mike Papantonio:             Okay, well talk to us about what the conditions are like in these detention centers for these kids already separated from their families. And I’m, I’m curious is what, what are the, what are the solutions here? What, what do you do? Do you just stop, is it, is this, do you, you release them to the general public? What is the idea of how you go about solving this problem other than to have some rule of law in how this is dealt with. What’s, what’s the alternatives? Please.

The water and the facilities aren’t living up to code. There are several places that the government has facility and there are other places where there’s these sort of private contractors and both of them are not meeting the need. The concern is that the, this is not, this is a known quantity. We should have prepared for this before because it was the very beginning of the year that we knew these surges were happening. So we need to live up to the standards of the Constitution and, and provide humane facilities for the processing of these individuals.

Mike Papantonio:             Yeah. How successful have the efforts been to reunify these children with their families? I mean there’s a lot of talk about it. Well we’ve tried, and again, I, I don’t want to say this is a Democrat or Republican thing because I, you know, I followed it in Obama. I was hugely, by the way, critical of the same issues with the Obama administration. Completely I was critical even back before this developed. Here, the numbers are different, but you know, there was still a problem. There was really no plan to reunite these children with their families. What, what’s being done here?

Allen Orr:                                Right. So the problem is on the front end because if we had done the proper intake to make sure that we’d match people who were coming across the border so that we could return them, that would, that would have also created, well not have created such a large problem. In addition, they were telling individuals that they would keep the kid and return the parents to their home country and then sort of finding them to return their kid has become problematic. So the many kids that we separated early on, there’s still hundreds of them that have not been reunited with their families.

One of them we separated at four months old, which is now almost two years old. So that’s very problematic in the whole system of what’s going forward. So not a lot has been done to sort of reunite these families overall, which is part of the problem.

Mike Papantonio:             So, so this is something that’s been dragging on for eight years under Obama and this year on Trump years, it’s been dragging on and everybody talks about it. And I can remember talking about it, the admins during the Obama administration, I can promise you I did. And my, my criticism was then you got to have a plan. Okay. You just can’t say this is terrible. You got to have a plan. And there was no leadership that had a plan there. There is no leadership that has a plan now. And I’m wondering, what impact has our federal crackdown in general had on immigration, specifically along the Southern border? What, what kind of impact, if you were to quantify it, how would you distill the impact?

Allen Orr:                                I think it’s more of a political impact than anything else, right. I think that the focus on the Southern border, it’s problematic and it just shows concerns of just the Southern border when in fact we have a number of borders. And we are never concerned with all the people who come here legally and overstayed their visas during this administration or some of the other ports of entry where drugs and things sort of come to the United States. So it sort of gives a focus political argument of saying this is a large number of people. Let’s sort of focus on this. This is a threat.

And I think that that’s really been what the big political scheme has been. There was a problem under the Obama administration with some humanitarian situations and also with the families that were sort of being detained for over a period of time. But there wasn’t this concern of just humanitarian rights at the port, at the port of entry at the Southern border that there are right now. Which is supposed to be a deterrent, which really isn’t working to deter people from the, from the three regions for coming up to the, to our port of entry.

Mike Papantonio:             Allen, thank you for joining us. I want to get you back on. This is a story that is going to continue building.