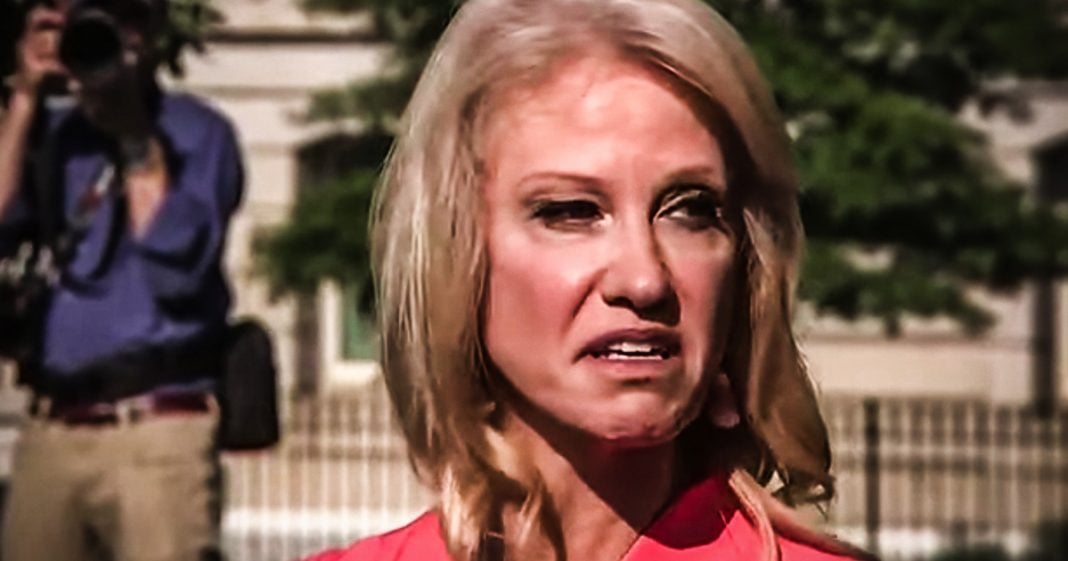 Kellyanne Conway does not like being asked tough questions, and apparently she doesn’t like being asked easy questions, either. Recently, a reporter asked her a simple question about Trump’s healthcare plan that he promised would come out in two weeks, and she went completely off the rails about the issue because she had no idea how to answer. Ring of Fire’s Farron Cousins discusses this.

Farron Cousins:             Everybody knows the Kellyanne Conway doesn’t like to be asked tough questions. But what we found out earlier this week is that Kellyanne Conway also does not like to be asked the very easy questions. This happened earlier this week on Tuesday, Kellyanne Conway kind of met in impromptu little meeting with some reporters out there in the White House driveway and one of them NBC News as Peter Alexander just asked her, hey, uh, and real quick, you know, Trump promised us 18 days ago that he was going to have us a major healthcare news in two weeks. It’s been 18 days. So, so where, where’s that big announcement? But apparently that question was enough to absolutely sin. Kellyanne Conway over the edge. Take a look,

Kellyanne Conway:        I’m Just asking if you’re even up on this cause I don’t think you’ve covered them at all.

Kellyanne Conway:        Those are made, those are major announcements to the public. We’re doing building blocks in healthcare.

Kellyanne Conway:        The president, actually I am one of the people who works in his plan here you have a great team. Really smart people working with his plan will be with the president today going over pieces of it.

Kellyanne Conway:        If he wants to, sure he can. Absolutely. And you for two years said that there was Russia collusion and there wasn’t. So where’s that?

Kellyanne Conway:        I think he could have more than two weeks to come up with better healthcare in a country that where the healthcare, it doesn’t even exist.

Kellyanne Conway:        You know, Medicare for All wants to take away your health care and anybody else here who gets it from their employers, 180 million Americans get health care from their employers. Medicare is meant for Medicare for All would be less Medicare for seniors. Medicaid is meant to be for the blind, the disabled, the pregnant women, others who need it. Obamacare is a huge expansion of Medicaid into, into all different areas. This president at least is trying to improve health care. We’re looking, I know Francesca caught me off because we’re starting to get a little too complicated here. Too many syllables, tribal care, rural here, maternal care. Oh, but she’s like, I care about health care, but. I mean and three of you in a row had mentioned president. Four of you in a row had to mention President Obama because that’s important.

KellyanneConway:         I didn’t see you covering any of those stories.

Farron Cousins:             All right, so let’s, let’s be 100% clear if we can make any sense of, of, of any of that. Um, the president told us, Kellyanne, that he’d have a plan in two weeks, some big granted outs there. In fact, you know what? Here’s his exact quote. Here’s the exact word for word quote from the President on June 14th. He said, we’re now working with Congress to pass that in, surprise medical billing, which is good. We’re going to have another big announcement in two weeks on unrelated, but something that’s going to have a profound effect on the things that we’re talking about and have been talking about over the last two and a half years. It’s going to be something really incredible that’ll take place over the next two weeks. That’ll be a very big announcement. Nobody knows what it is. It’s going to be a big surprise, but it’s going to be a very pleasant, okay.

Those are the exact words of Donald J. Trump, president of the United States on June 14th in the year of our Lord 2019, Kellyanne. And you got pissed at the, this NBC News reporter for asking You about it. All he did was bring it up like, hey, the president promised a thing. Where’s this thing? You know? He said, it’s going to be a big surprise. We’re all super excited. It’s going to be pleasant to, okay. I think, I think Trump was actually telling the truth when he said, nobody knows what it is because I don’t think he knows what it is. And I’m fairly confident Kellyanne Conway doesn’t know what it is because Republicans have now had almost 10 frigging years to come up with a healthcare plan and haven’t come up with a single thing. So why should we have believed? And I don’t believe this reporter thought it was going to happen for a second.

When Trump tells us two weeks, you get your plan. Because he was supposed to get us a plan back in April and before that I was going to happen in March and was gonna happen in January. And then it was gonna happen pretty much every day for the two years preceding that. And it never did because he has no ideas because he’s never had to deal with any actual real world problems in his entire life, and he can’t even wrap his brain around the fact that the rest of this country is struggling. Not only can he not wrap his brain around it, but he also doesn’t care. So he’s not going to do anything about it, not just because he doesn’t care, but also because, let’s be honest, he’s not policy smarter. Smart enough, and certainly neither is Kellyanne and neither is the Republican party because after all, they have had almost 10 years to come up with some kind of viable healthcare plan for the American public, and after almost a decade, they have literally nothing to offer.