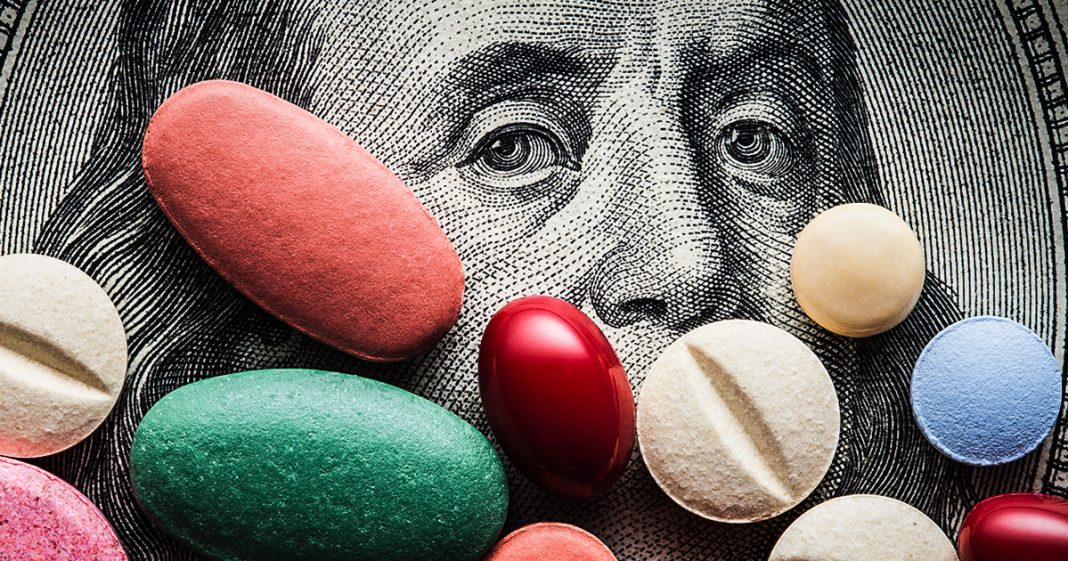 In the first half of 2019, major pharmaceutical companies have raised the price of 3,400 different medications, with several dozen of those price increases being in the triple digit percentage. The average cost has increased by more than 4 times the rate of inflation, and the only reason this is happening is because they know they can get away with it. Ring of Fire’s Farron Cousins discusses this.

According to a new report, more than 3,400 prescription drugs in the United States have seen their prices increase in just the first half of this year. Most of these price increases were I guess by comparison, which you would consider moderate, usually just a little over 10% but unfortunately that 10% price increase from most of these drugs is more than four times the rate of inflation, which means that these prices were not raised just to keep pace with inflation. They were raised because pharmaceutical companies can, and that is the simplest answer and that is in fact the answer that you will get from pharmaceutical companies as to why they raise their prices. But here’s the real shocking part of this story. We knew drug companies were going to raise prices. They were going to do it last year, but believe it or not, Donald Trump tweeted at them, you better not do it.

And guess what? They didn’t do it. They just made an announcement that they were going to postpone the price increases until January 1st, 2019 and they didn’t waste any time once the year started. 3,400 drugs already have seen the prices go up so far this year, which is a a 17% increase from last year in the number of drugs who saw their prices increase. But 40 of those 3,400 have seen their prices increased by triple digits. For example, according to ars technica, we had a generic version of Prozac, a generic version of Prozac supposed to be the cheap stuff, right? That price increased by 879%. Then you had a topical steroid, a mometasone saw a price increase of 381% basically a steroid cream, 381% a pain reliever, cough medication, which is, uh, promethazine and coding saw their price increased by 326% and an ADHD treatment, a Guar Guanfacine two milligrams, the price of that increased by 118%.

Now when I said that the drug companies do this, just because they can, I mean that, and when I said that they have said that I meant that as well. Mike Papantonio has taken the depositions pretty much all of the major pharmaceutical companies you could imagine. And at one point he was doing depositions in the Netherlands of drug companies, CEO’s over there for drug they sell here in the United States, kind of based out of the, uh, Europe over there, and he asked just out of curiosity, as part of this deposition, which was videoed, unfortunately, I can’t show you the video, but he asked, just out of curiosity, why, why are you charging X amount over here in the Netherlands, but you charge, you know, hundreds of more percent over there in the United States and the executive responded because we can.

That was their answer because we can, a loyal viewers of ring of fire understand that. We have told that story many times in the past. Mike himself has told it and he tells it much better than I do, but the point is they do it because they can and it’s not going to stop. They are going to continue to squeeze us, continue to raise these prices until some kind of policy comes along that prevents it from happening. We cannot scare them into changing their ways. We cannot even shame them into changing their ways. The only way this changes is through law, and I’m not even talking about Medicare or Medicaid negotiating prices. There should be no negotiation. There should be a flat blanket percentage of markup and that’s it. You can’t charge a dime over that. Maybe it’s 10% maybe it’s even a hundred percent because some of these pills only costs, you know, a few pennies to produce.

We, the tax payers are already funding most of the research and development. So that argument is bull crap that, oh, we gotta repay ourselves. You want to repay the research and development, then you need to be cutting checks to the federal government, or even better start cutting checks to the individual American taxpayers out there who actually paying for it. But the point is we have to have blanket price controls on these pharmaceuticals. Negotiations are not going to work. They might lower it, but it’s not gonna be enough. Price control is the only possible solution to this industry that is completely run a muck and has been overtaken by greed.