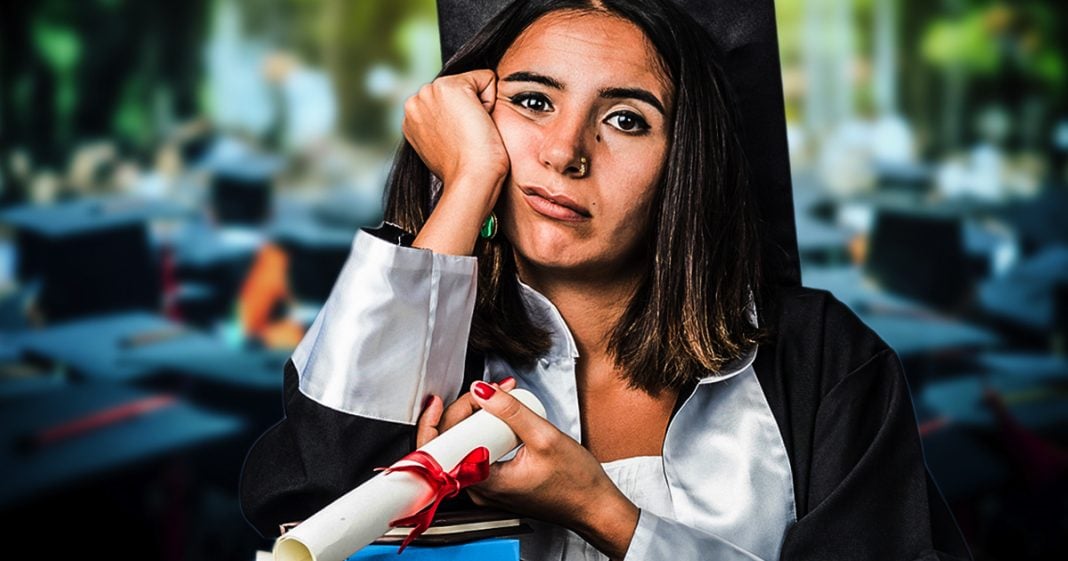 Republicans, and even some Democrats, love to tell us that we simply can’t afford to forgive the nearly $1.5 trillion in student loan debt held by Americans, but that price tag is actually cheaper than the cost of the Republican tax cuts for the wealthy. Considering the fact that this freed-up money would still re-enter the economy, this is a no-brainer issue. Ring of Fire’s Farron Cousins discusses this.

One of the most annoying talking points that you hear coming from Republicans and unfortunately far too many Democrats, when you talk about any of these progressive, uh, policies like forgiving student loan debt or Medicare for all, it’s, they always ask, how are you going to pay for it? How are you going to pay for it? How are you going to do this? We can’t do that. It’s too expensive. Well, actually, as it turns out, study after study report after report and analysis after analysis has shown us that these progressive policies are actually far cheaper than the systems we have in place now. And a new one of those came out earlier this week showing that the cost of the Republican tax cuts is actually far greater than the amount we would spend immediately forgiving all student loan debt currently held by every single person here in the United States. Right now, there’s roughly one point $6 trillion worth of student loan debt being held by American citizens and some of those people holding that debt, or even over the age of 65 it does mostly affect young people, but this is also an issue that does affect every age and every demographic.

One point 6 trillion cost of those republican tax cuts, two point 3 trillion. So we’re talking about a $7 trillion difference in these two proposals. Either we give wealthy people two point $3 trillion or we give people who are going to spend that extra money they’re having to, they’re getting to save each month. We give them one point $6 trillion in a one-time payment and student loan debt is gone. The numbers are clear. Give that money to the people with the student loan debt and let the rich people, pay taxes like the rest of us. Because here’s the thing, as I mentioned, these people are going to actually spend that money and that is the truth. Uh, roughly I think it’s 80% of people in this country spend every dollar that they get. They cannot put any in savings. They need to spend that money. So if you take, these tens of millions of people holding one point $6 trillion in debt and suddenly they don’t have to make those payments every month, whether it’s $100 or 400 or $500 do you know what they do with that money?

The vast majority of them, nearly all of them are going to spend it because they have to, not because they’re bad with money, but because they have to. Some of them will be able to save. The rest of them are going to have to take that extra 100 or $200 and guess what? Maybe they can afford to get that new tire for their car cause they’ve been driving around on a spare for six months. Maybe they can finally afford to go get their oil changed. Hell maybe they can finally afford a nice night on the town and go out to a nice dinner every now and then. Something that seriously, I don’t think enough people because maybe you haven’t been in this position, but I have that can be a luxury.

And I say this not only as somebody who understands what numbers are and understands that you helped the economy more by paying the one point 6 trillion to pay off student loan debt than giving two point 3 trillion to the wealthy elite. I also see it as somebody who’s lived it. I still am paying off student loan debt and according to uh, the charts and graphs I see each month when I go in there and make my payment, I’m going to be paying it off for another 25 years.

If I were to save that $200 every month is what my current payment is, it goes up and down every year. If I were to have that money back each month, I’m going to spend that. Maybe I get to take my wife out to a nice dinner, which I couldn’t even tell you the last time I’ve been able to do that. Maybe I can go ahead and afford to take my car in and find out why it’s making the weird noise that it’s making right now. And I’m not making that up folks. These are the things, the little things that the majority of people in this country can’t deal with. We can’t do them. And part of the reasons cause we’re saddled with the student loan debt. Part of the reason is because some of the folks out there are making seven 50 an hour and they could be making 15 part of the reason is because some of us have thousands upon thousands of dollars in medical debt that there is no possible way we’re ever going to be able to pay off just like our student loans.

And the bottom line is that we have candidates out there right now running for president who have plans and proposals and ideas on how to fix these problems and put more money back into the pockets of the people who actually drive this economy. Because if you think that it’s the top 1% that are driving this country forward, you are sorely mistaken. It’s the workers. It’s the people who go out there and spend 100% of their paycheck, and if you give them each an extra 100 to $200 every month, do you know what that adds to local economies.

Millions, millions of dollars each month suddenly trickling through the economies, adding up to billions and eventually trillions. You pay off their student loan debts that one point 6 trillion you get your money back and you get it back a hell of a lot faster than you think you will. But as we’ve seen time and time again, giving those tax cuts to the top 1% you don’t ever get any of that money back because it never trickles down.