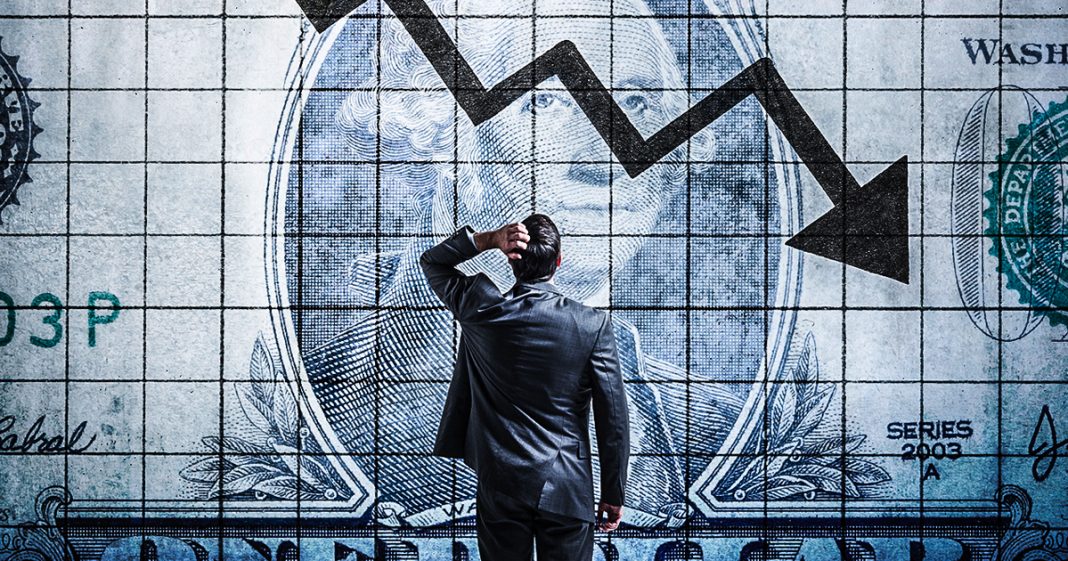 According to new reports, roughly one-third of Americans have had to cut back their spending this year for many different reasons. However, the bulk of the spending reductions are due to the fact that people are losing money at work, facing massive medical and other debts, and generally having less money than they previously had. This is driving our country towards a recession, regardless of how “amazing” the stock market is doing. Ring of Fire’s Farron Cousins explains what’s happening.

Over the last week or so, Donald Trump has been tweeting a lot about how awesome the stock market is doing. And it is, I mean, there’s no denying that. And of course it’s still not growing by the same percentage it was growing under Obama, but it’s still growing. And that’s building off of the growth of Obama. So the stock market is doing phenomenal and for the almost 50% of people who have some kind of money in the stock market, most of us just have it in some kind of retirement account. They’re probably kind of happy, right? But for the rest of the country that has no money whatsoever in the stock market, doesn’t even understand the stock market, none of that matters. And in fact, those people, according to the latest data, are actually having to reduce their spending because they just don’t have enough money according to a new report by the invest in you spending survey published by CNBC, one third of Americans in this country.

You’ve said that this year so far, they have had to drastically reduce the amount of money they spend. And it’s not just because, ah, we’re going to stop spending, we’re going to start saving money. That’s not what it is. The number one reason that one third of Americans say they’ve reduced their spending is because of a job loss. Another large percentage of them say that they’ve had to reduce their spending because they have massive medical debts they have to pay off or they have accumulated other debts that they also have to pay off. And here’s where I’m going with this. One third of Americans in this country are spending less money today and it’s because they have less money either through job loss, a wage decreases inflation, but no pay increase or because of massive debt. These things are the result of Republican policies. And let’s be honest, corporate as democratic policies as well.

You know, we can both sides of this a little bit I guess, but the fact of the matter is that if these people continue to reduce their spending and if that number of people who are reducing their spending increases, you know, maybe it goes from one third to one half, then do you know where we’re headed? We are headed right down recession lane folks because it is those people, the people that spend 100% of their paycheck, the people who clock in and clock out of work, nine to five every day or midnight to 7:00 AM whatever it is. Those are the people that drive our economy. Those are the ones actually out there spending, putting money back. They make it, they spend it. This person then makes it, they spend it and so on and so forth. You know who’s not driving the economy right now that people kicking ass in the stock market, they just want to make more money with it. Maybe they’ll sell that stock and invest in another one. Those of us with retirement accounts, we don’t even know where we’ve got money invested in. Some of you might. Maybe you’re more responsible than me. I don’t even know how much I have in there. I know it’s not much at all, but I guess I’ve got a little bit in there, but the point is none of that matters.

You can brag about the stock market all day long and guess what? That’s not going to save us from heading into a recession because the people driving the economy are having to spend less and less. And as I have stated countless times in the past, what happens when those people start spending less than other people have to start spending less because they’re earning less. You know, suppose the restaurant down the street suddenly overnight loses one third of their business.

That’s not going to be good for them. That’s not a sustainable business model of suddenly one third of the people who used to show up are gone for good. So then you’re going to have to cut back on your employee’s hours and your own personal spending. Well then your employees and yourself now have less money to spend. So maybe the businesses they frequented, they see a reduction in their numbers, so they’ve got to make the necessary cuts as well. That is how a recession starts. It can start local and go national in no time. And in fact that is one of the things that this study says, Hey, we’re, we’re still headed for that recession, folks. We’re still headed there, and these numbers are absolute proof that the policies of holding down the working class in the United States are driving us into a recession. If we enacted student loan debt relief, Medicare for All, $15 minimum wage, things like that, that could prevent this. But it’s the people, most of them on the Republican side holding those policies back, preventing them from becoming law of the land that are forcing these people to reduce their spending. So when the coming recession finally arrives, make sure you remember who exactly is to blame for this, because we know the solutions. We have the plans. There’s just one party standing in the way.