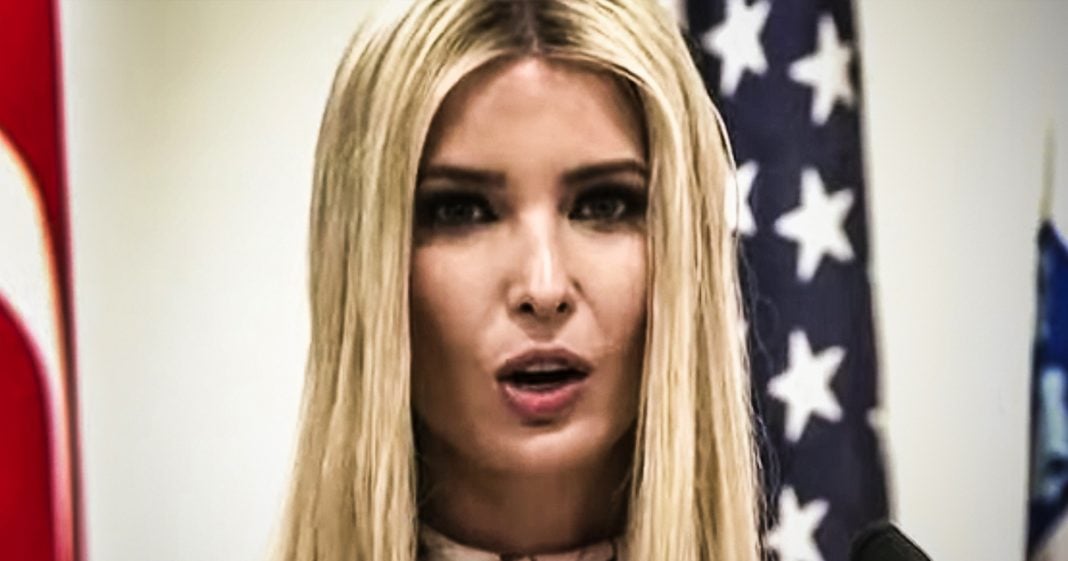 Between the viral clip of Ivanka Trump trying to wedge her way into a conversation with world leaders and news that the investigation into her use of private emails is heating up, Ivanka has had her worst week ever since taking a job at The White House. And she completely deserves the criticism and scrutiny that she is now receiving. Ring of Fire’s Farron Cousins explains what’s happening.

You know, Donald Trump usually has bad weeks, so get on Twitter, he’ll say stupid stuff, investigations of pop up. He’ll lose a few court battles, maybe new lawsuits even pop up. So Donald Trump is no stranger to having bad weeks in the White House, but his daughter Ivanka is a little different. I am. Most of the time we forget that Ivanka even exists until we see or show up in pictures, right? Or see her walking to an event. But we forget the day to day she’s actually there because for the most part she kind of stays quiet. But that didn’t happen this week and that is why this week Ivanka Trump had a far worse week than her father did and it all started last weekend at that G20 Summit when that clip went viral of her walking up to other world leaders, the IMF chief and tried to get a word in, but instead people pretended like she wasn’t even there.

She didn’t know what she was talking about. She had no idea what they were actually talking about. Tried to throw in her 2 cents. They kind of said, we don’t want that here. Please go away. The White House got super pissed White House staffers because everybody in the country here focused on Ivanka stupidity mostly from that clip instead of on how great Donald Trump was. So that’s the second thing against Ivanka. Not only did she go over there and make an ass out of herself, but then everybody talked about it and completely ignored the fact that the White House staffers thought Trump did something good and that he should get credit. But everybody’s talking about Ivanka instead. And the third really bad thing for Ivanka that happened this week was that Democrats in the House of Representatives have actually expanded their investigation into her use of private email clients for official White House work, which if you remember back to 2016 according to Republicans, hell, that is a, a trader is treasonous offense that should result in a lifelong presence sentence, right?

I mean, I can’t remember the exact words, but I think they were what? Lock her up and that what they said about Hillary Clinton for using private emails for official work, lock her up. Correct me if I’m wrong on that. So shouldn’t they be saying the same thing about Ivanka? Because that is exactly what she did. It’s also exactly what her husband did. I mean, they’ve got a pattern of behavior here and it’s infected the entire family, but to be honest, Ivanka Trump deserves this. She has no business being in that White House, and that is why also earlier this week, the Ivanka resign Hashtag was trending on Twitter. People also started photoshopping in pictures of quote unwanted Ivanka throughout different periods of history, major events. They’ve just put these little pictures of Ivanka. They’re kind of like, she was at the G20. You really have no business being there, but it’s funny to see you out of context. Ivanka Trump is a full, maybe she’s good at business. I don’t know. That’s not what this is. This is politics. This is foreign policy. This is domestic policy, and Ivanka Trump just happens to just be there for no other reason than she is the president’s daughter.

Members of this administration have anonymously of course, said that to newspapers. They don’t know why she’s there. Sometimes she just kind of butts into meetings and people kind of give her the side-eye glance like, what the hell are you doing? But Ivanka is having a really bad week. And the reason is because people are finally starting to pay attention. And this is the kind of scrutiny and the kind of ridicule to be honest, that she should have been receiving from day one. She does this crap every day, whether or not we get to see it. She has been corrupt as hell with this email thing, and that deserves to be investigated along with her husband. But she doesn’t deserve to be in the White House. She has no business being there. She has no qualifications to be there, much like her father himself. But unfortunately for now, we appear to be stuck with her unless and until we put the pressure on her, keep the camera’s focused on her, and highlight the fact that she is too buffoonish to be serving in any administration for any reason.