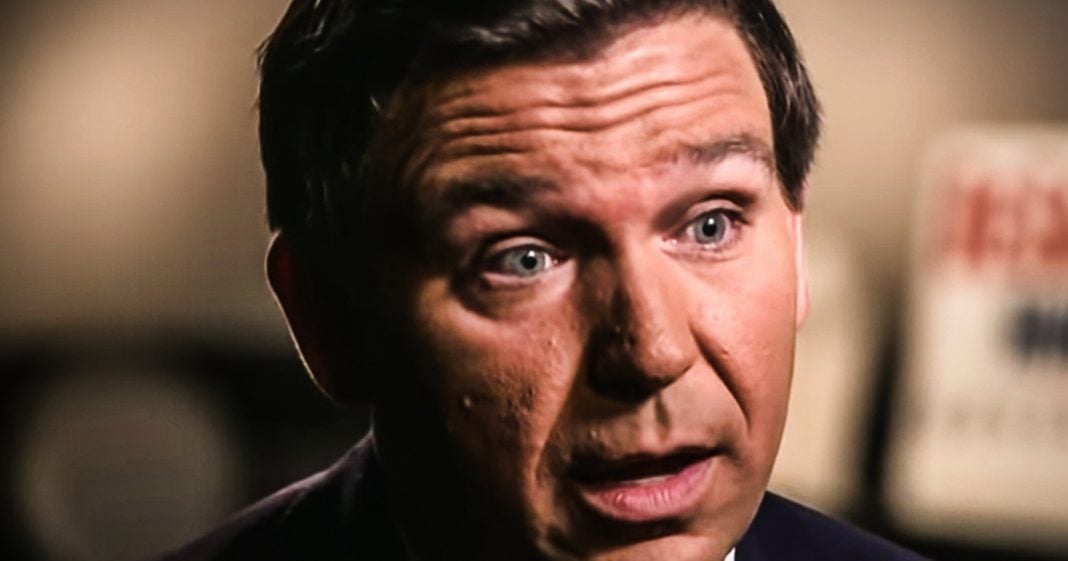 Florida’s Republican governor Ron DeSantis has given a giant middle finger to the voters of his state by signing legislation that would institute a modern-day poll tax to prevent former felons from getting their right to vote back. A majority of Florida voters passed an amendment last year to give these people their vote back, but Republicans in the state have done everything in their power to prevent it from happening because they understand what it means. Ring of Fire’s Farron Cousins explains what Republicans in Florida are so afraid of.

Republican, Florida Governor Ron DeSantis last Friday signed a law that is basically going to institute a poll tax for all of the former felons in the state of Florida who had been given their right to vote back by more than 5 million Florida voters this past November. Ron DeSantis and the Republicans in the Republican controlled legislature here in our great state of Florida, decided that voters didn’t really understand what they were voting for. You know, the amendment, which again, more than 5 million people voted in favor of more than 5 million people in this state said, yeah, let these people vote. It passed easily. And then the Republicans in the state came along and said, no, folks, you didn’t understand what you were doing. The amendment wasn’t quite clear to you. So we’re going to take it upon ourselves to change this thing that the voters in our state voted for, to something that better suits our own needs and what could better suit a Republican’s needs than suppressing the vote.

This new legislation that DeSantis has signed is going to force former felons to pay back all restitution to victims, all court fees, every kind of fee associated with being convicted of a crime, and once every dime has been paid back then, then you get your right to vote back and that’s a poll tax folks, that is a poll tax saying you can’t vote unless you pay this money. That’s how that works. And here’s the thing folks. Sometimes people do get hit with tens of thousands of dollars in restitutions and fines and all of those other things and it takes them years to pay it back, but they work, their wages are garnished, they don’t have to worry about sending a check. Money comes out before they even get their check and they’re making good faith payments by staying employed. They also help the economy by staying employed too. So the state’s getting their money back to victims are getting their restitution, but until every dime has been paid, now we’re saying, no, you can’t vote.

That’s it. You’re going to wait. Even though the voters in this state said, you get to vote. Now there’s a reason Republicans have been working feverishly since January to make this a reality, and that is because estimates show that this amendment passed by Florida voters could restore voting rights to 1.5 million people in this state if only 20% of them vote consistently. That is more than enough to change every single election that has happened in the state of Florida since at least the year 2000. 20% is all it would take. Now, just imagine if you had 100% hell, imagine if he had 50% this amendment passing dramatically changed the face of the Florida electorate and it changed it in a way that’s not going to benefit Republicans. They understand that and that is 100% why they’re doing this. It’s not because they actually think the amendment was ambiguous or that it was worded incorrectly.

It’s because they didn’t think it was going to pass, but they couldn’t stop a constitutional amendment from getting on the ballot and then once it was passed, they couldn’t stop it from taking place. They could just make their little legislative tweaks in there to make sure that it couldn’t be implemented. At least for now. You do have groups. The ACLU has already come out. In fact, they came out the same day that DeSantis signed this in the law last Friday and they said, well, see in court, because this isn’t going to stand, and I think the ACLU is 100% correct. The voters voted for a specific thing. You Republicans came along and you changed that specific thing, so it is now no longer what the voters actually put in place. That’s not going to stand. Not to mention the fact that if a former felon is making those good faith payments in restitution and fines, court fees, whatever it is, if they’re making those good faith payments, there is no reason to not go ahead and let them have their right to vote back. That is what the voters wanted. That is what we passed, and that is exactly what Republicans in this state are trying to take away because they understand that if we put these 1.5 million people back on the voting rolls, suddenly Republicans don’t win any more elections in the state of Florida.