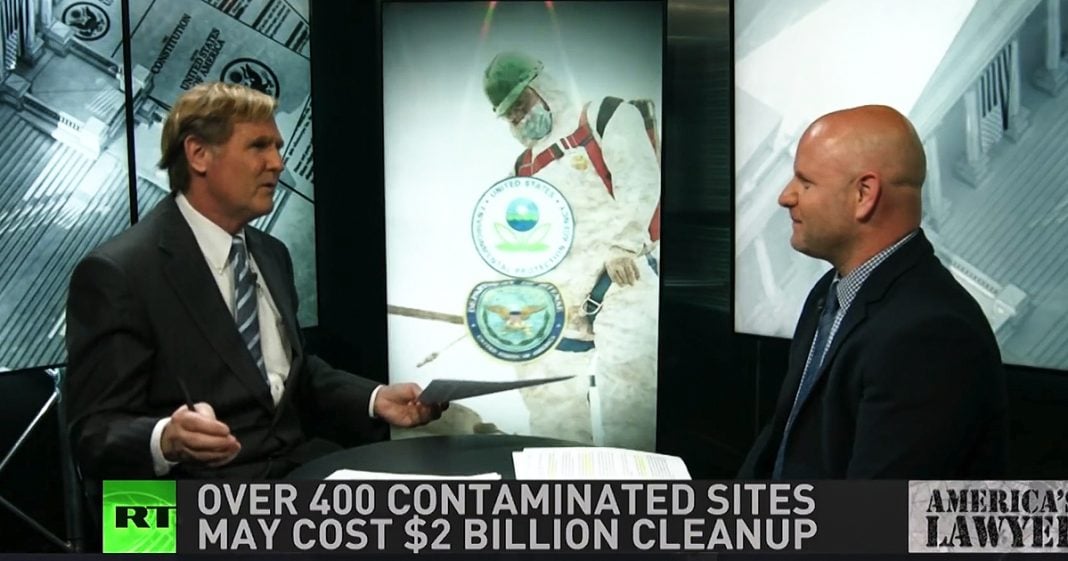 Via America’s Lawyer: Mike Papantonio and Trial Magazines Editor Farron Cousins discuss how the EPA may be lowering pollution standards to accommodate the widespread use of PFA’s among U.S. military bases. This despite 172 military sites having been confirmed to be contaminating neighborhoods nearby, with a potential cleanup costing nearly one billion dollars. The chemical is popularly used by firefighters and manufacturers of non-stick cookware, and has made its way into over 90 percent of Americans’ bloodstreams.

Mike Papantonio:             The EPA is trying to weaken the rules for the Defense Department so they can pollute communities without the fear of any kind of oversight at all. And so where we’re really seeing this is the topic on PFOA, I mean C8. You know, the case, The Devil We Know, how do you get a better documentary? This documentary is winning every kind of award you can possibly win. It’s called The Devil We Know.

It talks about the tragedy of C8 and how it’s killing people in your, it’s in your drinking water. It’s killing you with, with cancer. It’s killing with neurological disease. It’s causing birth defects. And the public has barely paid attention to it until we tried that case in the Ohio River Valley. Remember I tried, we tried four one behind each other and punished DuPont, and then all of a sudden, now all this information’s coming out, except the DOD and the Pentagon want to keep it quiet.

Farron Cousins:                  Right, because this, these PFOA chemicals, it’s not just C8, this stuff is, is everywhere. It’s in firefighter foam and that’s where a lot of the contamination from the Department of Defense comes from. The firefighting foam, they use it all the time on military basis. It’s in rain coats, it’s in any kind of nonstick, slick coating. PFOA’s are in 98% of our bodies in this country and it stays there for years and years.

Mike Papantonio:             Teflon pans, you go to your kitchen and you’re going to find it all over your kitchen Teflon pans. Okay, so here’s what they found. These, these military bases where there’s about 600 of them, they use this for firefighting as you point out. And now we know that they’ve, they’ve identified 172 sites where we know that because of that military base, the drinking water and the groundwater in that area around the base has been affected and it’s been affected this way.

We know this for sure. We know that if there’s a certain level of C8 in your drinking water, you are multiple, multiple increased risk for cancer. Now in and when we tried the case up in Parker’s, I mean, up in the Ohio River Valley, most scientists will tell you there should be zero C8 in your water. But the EPA to begin with said, oh no, let’s make it if it’s okay, if there’s only 30 parts per trillion in your drinking water.

Now to put it in perspective, one drop in a, an Olympic size pool, one drop, just a regular job in an Olympic size pool is one part per billion. And they’re saying 30 parts per trillion is acceptable. But the Department of Justice, I mean the Pentagon, that’s not even enough for them is it? Pentagon’s fighting back on that aren’t they?

Farron Cousins:                  Right, the Pentagon wants to up it because they know how much contamination they have. And they say, how about for just us, EPA, how about you, you give us a special deal that’s 300 parts per trillion. They want to take it up to 300 parts per trillion. We’re talking about more than roughly five times what the EPA even says is borderline acceptable. And the Pentagon wants to say, you know what? We want to save $2 billion because that’s how much they’ll save if they up the standards. So could you just do it for us? I mean, this is a department that has $750 billion in fund money per year.

Mike Papantonio:             And they’re complaining that it’s going to cost them a billion or so to clean this up.

Mike Papantonio:             They could do it tomorrow. The second thing they’re doing is they’re trying to slow the process down. The EPA is dysfunctional and as, you know, awful as they are, had enough sense to say, this is an emergency. We need to handle this as an emergency. And the Pentagon is saying, no, we don’t really want to handle the emergency. Let’s slow play this. Let’s see where it goes. Where, where it goes is people are drinking C8. They’re bathing in it, they’re filling, they’re feeding it to their children in baby formula when they mixed baby formula.

Farron Cousins:                  Well, you and I right now are sitting in an area that’s basically surrounded by three massive military bases and we know according to maps by the Environmental Working group, this area you and I are sitting in right now is one of those sites that is hugely contaminated. We, we, we have it right here in our backyard, quite literally, and the people in this area, I don’t even think that they understand. But that’s what people have to realize is that just because it’s not on the national news doesn’t mean that you’re not being exposed to this. People should be talking about this. The media absolutely is God awful.

Mike Papantonio:             Well the media is responsible for a lot of this. You understand, corporate media didn’t tell this story because DuPont and 3M were their big advertisers. So they refuse to tell the story. Even, this is so interesting, even when I was in trial, they wouldn’t tell the story. So, you know, this is a story, this, this, this stuff is killing people. Farron, thanks for joining me. Okay.