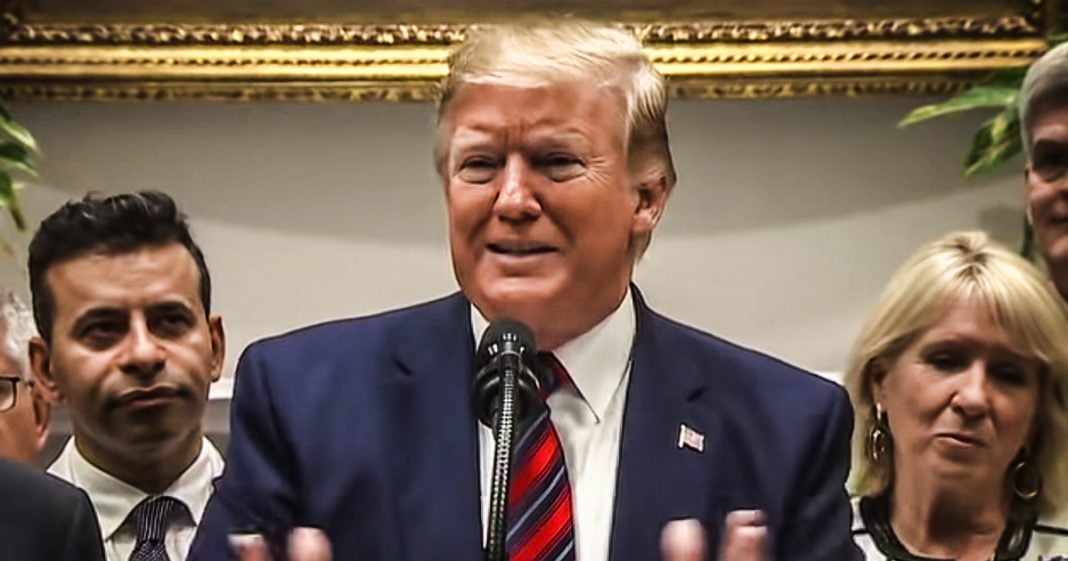 Reality is subjective in Trump World, and the President still insists that polls showing negative results for him are fake. This man has a very clear problem with admitting that half of the people in this country simply don’t like him, and his denial could prove costly in the 2020 election. But maybe that’s for the best, as Ring of Fire’s Farron Cousins explains.

Earlier this week for really no apparent reason, Donald Trump decided to tweet out the following. He said, as most people are aware, according to the polls, I won every debate including the three with Crooked Hillary Clinton. Despite the fact that in the first debate, they modulated the sound on me and got caught. Um, yeah. Here’s the thing, folks. Nobody really understands why Donald Trump decided to just randomly tweet this out. Why? Why is he digging back into 2016 why did he do this on a Tuesday morning when the democratic debates ended on Thursday? Who knows? But the fact of the matter is that there were actually no poll showing that Donald Trump won any debate, not during the Republican primary and not the ones against Hillary Clinton. All of the polls actually showed his opponents won and he lost every single one of them. But that’s why this really odd tweet actually matters because this has become a pattern for Donald Trump.

He repeatedly tells us that he has high approval ratings even when we can actually look at the polls and we can look at the polling composites and see that this man has never, not once since becoming president hit a 50% or more approval rating hell for that matter. He has never had a net positive approval rating. Even when he did have higher favorability ratings shortly before he took office in between the actual election and him being sworn in is favorables weren’t awful, but they still weren’t enough to completely counteract his own favorables but he has never been willing to admit it. In fact, he actually said during his Monday night interview with Tucker Carlson, here’s what he said, here’s how he classified all these polls that show him doing horribly and this is the kind of reality we get a little glimpse into his head here.

He says, a poll just came out today, I’m at 54 or 55% and they do say, you can add 10 to whatever poll I have. Okay. And I never get good press. I mean, I haven’t had a good story. Why? I agree with you there. You have not had a good story. This Donald Trump story we’re watching unfold right now is God awful. You’re, you’re right about that buddy. But uh, uh, literally no poll shows you at 54 or 55% and who in the hell told you you could just add 10% on top of that? You don’t get to tip yourself with additional approval rating. That’s that. That’s not how that works. Honest to God, who is advising this man? Where is the adults in the room who told him? Oh yeah, you just had 10% of that. Is it that weird pollster that he kept after he fired the other one’s who’s been busted repeatedly faking poll numbers for his candidates and then they end up losing because he faked the polls and they thought they were safe.

I hope it is because that’s the other side of the story. Donald Trump is living in an alternative reality and we need to keep him there. That’s where he’s happy. That’s where he likes to be. Everything is fun and sunshine and he’s got a 500% approval rating, a 510% I’m sorry cause you got add the 10% right. You had 10 on top, but nonetheless let him stay there. That’s where he needs to be. He needs to think that everything’s great. He needs to think that he’s totally safe because if he were to actually understand that more than half of this country since the day he was sworn in has despised him, then he might actually try to do something to either win the election or maybe do something drastic like we’ve seen in the past for him to punish these people who do not approve of him. We’ve seen it with California with the funding for wildfire relief, withholding funds from them. We’ve seen it with him going after the, the Puerto Rican people down. They’re US citizens, but he’s punished them by withholding aid because they’ve said negative things about him and rightfully so. So let Trump live in his fantasy land. Let him think that everybody loves him because if he thinks for a second that we despise him, then as we’ve seen from history, he is going to attempt to punish each and every one of us.