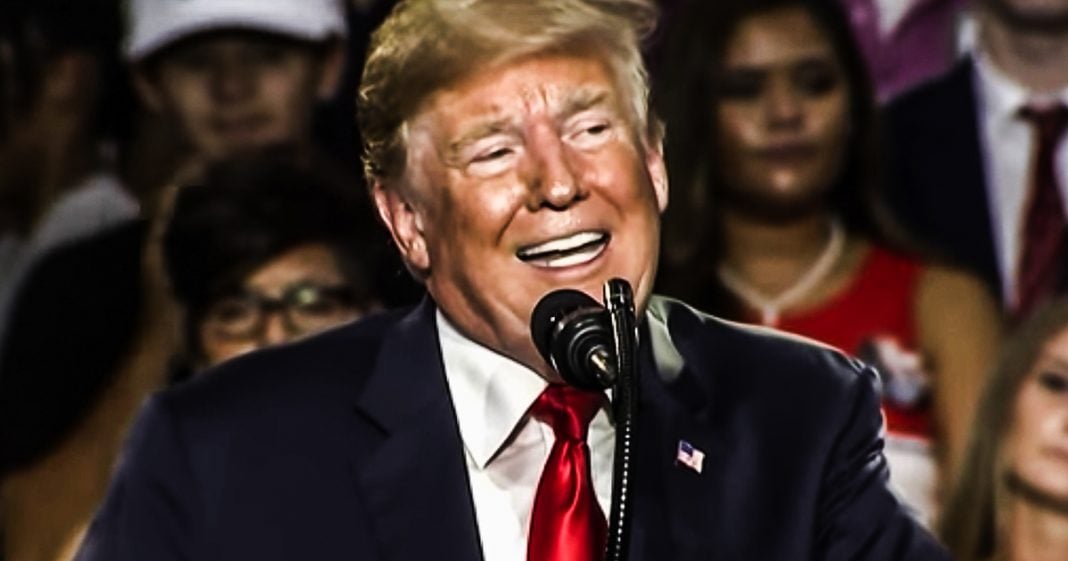 What is a campaign to do when they can’t find real human beings to be in their ads? They resort to using stock photos of models and masquerade them as actual supporters. That’s exactly what the Trump campaign has been doing in a series of Facebook ads where stock models are being labeled with titles and fake quotes like “Tracey from Florida.” Ring of Fire’s Farron Cousins discusses this.

Donald Trump, I know he kind of struggled to fill his inaugural parade, but nonetheless, he actually does do a pretty decent job of filling up stadiums whenever he goes and gives a rally. He has supporters out there in this country, even if his poll numbers are pretty much in the garbage. So it is odd that his campaign would feel the need to use stock footage of models from foreign countries to portray them as if they were actually Americans who support Donald Trump. But unfortunately for the Trump campaign, that’s exactly what they’ve now been busted doing. Now I say busted doing, there’s that and nothing illegal about this. There’s not even anything immoral about it. It’s just very odd that a campaign that claims that most of the people in this country absolutely loved them, that they’re winning left and right. Couldn’t even find actual human beings from the United States to star in their Facebook ads.

But that is the situation that we’re looking at today. Right now, the Trump campaign has been running ads on Facebook for the last 90 days. In fact, they’ve, uh, aired at 27,735 different times, three different ads spent two point $7 million on that. And that was just the Trump make American great again, committee make America great again. Committee. And the uh, Donald J. Trump for president committee spent 1 million on 14,500 ads. Again, both of those within the last 90 days. But what’s interesting about this is that they do have these models that again are in different countries. They’re are not American people, but they have them labeled as Thomas from Washington. Uh, they have Tracy in Florida, they have a j from Texas and each of them has a little voiceover that is very obviously not that person’s voice that says things like a Donald Trump and his family or in our prayers for strength and wisdom from God all mighty.

That’s Thomas from Washington. A.J. From Texas was a, you know, Kind of a Hispanic man trying to shore up Donald Trump’s Hispanic votes. Tracy from Florida, obviously young woman, a demographic that Donald Trump struggles with. So maybe that is why this campaign had to use stock footage that they purchased for about 170 bucks because they couldn’t pay a real human being and enough money to subject themselves to be in those ads. Because again, each one of these fake people from a different country represents some kind of demographic that the Trump campaign is struggling to attract. Trump is not the first person to do this. Let’s be honest with that. Marco Rubio, uh, in one of his ads when he was running for president, used footage from Canada trying to pass that off as America, Jeb Bush, uh, did the same thing. Donald Trump even did the same thing back in 2016 trying to show these migrant hordes coming across the border only to find out that wasn’t a people coming into the u s that was actually people going into Morocco.

Morocco is what that was. But these Republicans all have something in common, right? They’re trying to take one thing and portray it as something else because they don’t think voters understand. They don’t think reporters are going to take the time to dig into it. And say, hold up. This is clearly not the United States. This is not an American person. Even the ad says this is an actor portrayal, but it’s not even that. This is stock footage folks. This is something literally anyone in this country can get online and buy right now, and that is how lazy this campaign is. It’s almost as if they’re really not even taking this run for president in 2020 that seriously at all.