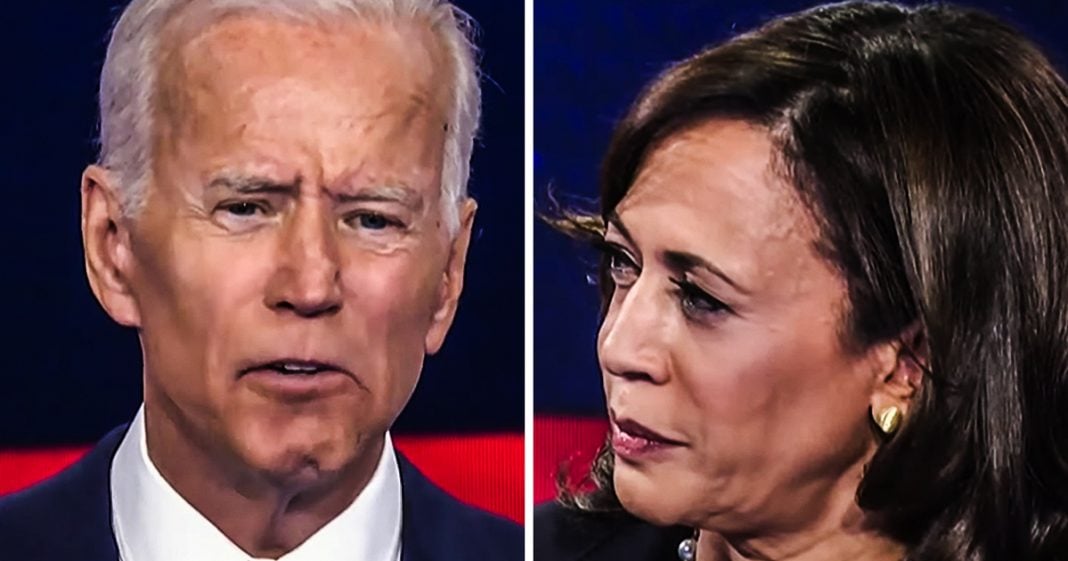 Joe Biden’s incredibly weak performance in the first debate has been causing him to lose support over the last week, but the biggest drop in support comes from African American voters. Biden’s support from that demographic has been cut in half in the past 7 days after he was humiliated on stage by opponent Kamala Harris. Ring of Fire’s Farron Cousins discusses what’s happening in the primary, and why Biden is in more trouble than he thinks.

Well, we’ve known been seven days since the night to democratic debate. We have seen 20 Democrats talk and in the seven day since then we have seen all kinds of polls of all shapes and sizes showing us that there is complete disarray in the Democrats numbers that Joel by and slipped Bernie slip. But then Bernie actually didn’t slip according to the latest poll. Harris is in third place, but nope. Now she’s actually tied with third place with Elizabeth Warren who also rose Buttigieg kind of went up, but then he went down and oh my God, who knows what to make of any of it. And the point is don’t make anything of any of that, but there is one number that we actually should be paying attention to.

In fact, it’s actually two numbers that we should be paying attention to. 40% at 20% 40% are the number of self-identified Democrats who also happen to be African Americans who supported Joe Biden prior to Thursday night’s appearance in that debate in the seven days since that debate, since Kamala Harris had to educate Joe Biden about the significance and importance of busing to help integrate schools in this country, Joe Biden’s support among African American Democrats has fallen from 40% to 20% it has been cut in half after hearing that man speak for grand total of what? 15 to 20 minutes maybe during that debate. That’s all. It took literally a few minutes of Joe Biden talking a few minutes of Joe Biden being confronted about his horrid history and his support among black voters fell by half. That’s one debate by the time we get to November.

Joe Biden’s going to be polling in the low single digits. He’s going to be pulling in Bennett numbers at that point or Hickenlooper numbers for that matter. If he continues to perform the way that he did during that first debate. Now there is a chance, obviously the Joe Biden’s going to rebound, going to show African American voters that he is not the same person he was in the 70s 80s and 90s and early two thousands and you know, up until about a year or two ago, I guess maybe he’s changed since all of that, but I doubt is going to be able to overcome that. All Kamala Harris did was call him on one of his worst stains on his legacy.

And now it isn’t by far the only stain he has on his legacy. She could have hammered him about Anita Hill. She got a hammered him about a million other things, but she only had to do it on the one and his support among African Americans fell by half. And here’s the reason I want to bring that number up. Anyway, memory in 2016 where did Bernie Sanders struggle? He struggled with African American voters. The attacks against Bernie Coming, the Hillary Clinton folks were constantly, Bernie can’t win the black vote. Well, he’s actually now the most popular politician amongst the black voters.

But where are they right now with Biden? Why? Why are they not saying the same thing? Biden can’t win the black vote. African-Americans don’t like Joe Biden. African Americans are abandoning Biden. Those are accurate statements. And all it took was Kamala Harris for 90 seconds pointing out what a horrid history Joe Biden actually has. Imagine what’s going to happen when another candidate goes up there and maybe they get two minutes to talk about Biden’s horrible history. That support’s going to drop even lower than 20% and all they have to do is just talk about the facts. And that’s enough to make Biden lose most of his support.