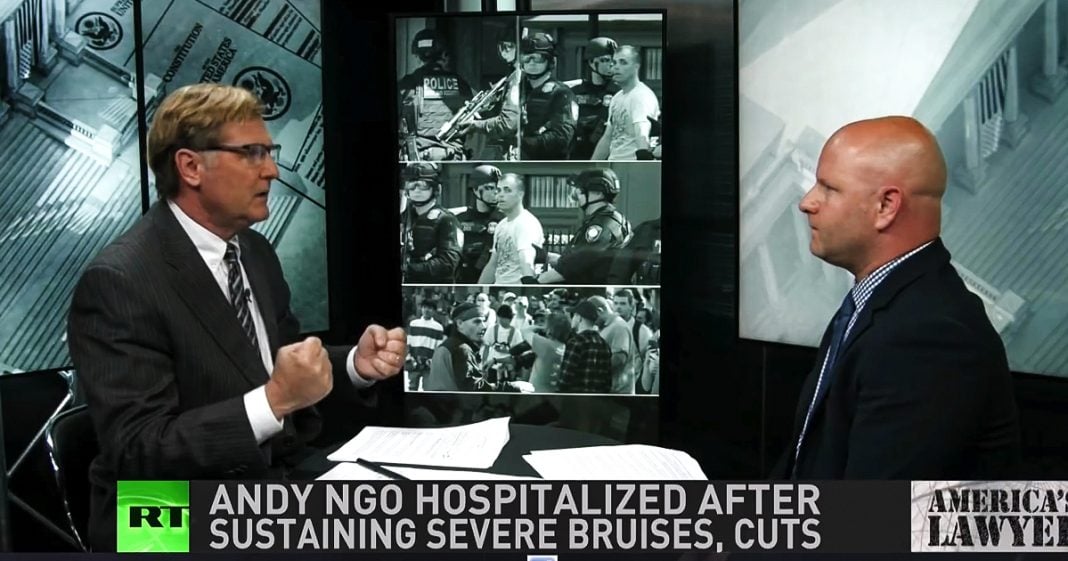 Mike Papantonio:             A reporter was attacked by Antifa protesters over the weekend in Portland, sparking an even larger online debate about Antifa’s intention. You know, I gotta tell you my take on this, I don’t know if it’s yours. You know, sometimes we land in the same place when we analyze things. Here’s how I see this. You look at where most of the Antifa, for example, California, they come from Berkeley, they’re in college, they’re moneyed kind of upper middle class white kids. It’s almost like, hey, let’s go skip class today and go have some fun. I mean, I don’t know how else to characterize.

You know, they dress up in their masks, and their hats and it, these aren’t people that come from hard times. These aren’t people that have over the years have had to see real social inequality. These are people mostly that have been given everything. They’re like these elitist white kids in college that say, hey, it looks like we’re going to have fun here. I mean, that as I read these articles and compare notes, that’s where I conclude. Am I wrong on that or what’s your take?

Farron Cousins:                  No, absolutely. And look what happened to Andy Ngo from Quillette and listen, I disagree with Andy and Quillette on just about every…

Farron Cousins:                  But it’s not right what happened to him. You know, nothing gave these Antifa folks the right to walk up to him and start punching him and throwing the milkshakes and spraying him with the silly string.

Farron Cousins:                  Right. He was allowed to be there. From what we’ve seen so far from the videos, unless something else emerges, he didn’t do anything to provoke them other than at this point existing right there. Now these people could have had an issue with things he wrote in the past and he’s done some bad things that got journalists death threats. But that’s not what this was about. This was just about these Antifa folks who were there looking for trouble. They wanted to do something. Maybe they heard stories of their grandparents talking about being hippies and we were rebelling against the establishment. And so they said, you know what? Let’s rebel against the establishment.

Mike Papantonio:             I thought the Occupy Movement was, was smart in so many ways. One thing the Occupy Movement did is it focused on corporate problems, corporate corruption. People who are killing our environment, people on Wall Street that were killing our economy. It focused on real issues that we could tangibly, you know, put, put our hands around. Here, the proud boys. Okay. First of all, the group is called the proud boys. There’s about 25 of them and they’re out, they want to protest. So the Antifa come out with their man bags and milkshake and silly string and they want to confront the proud boys. It’s almost cartoonish.

Mike Papantonio:             Isn’t it? I mean, it’s sophomoric and it’s cartoonish. Here’s the problem though. Antifa is now being hung around the necks of progressive’s all over the country. Progressive’s who really are trying to do something, really trying to accomplish something. These guys, they’re in class, hey, let’s skip class today at Berkeley, UCLA. Let’s go out and have an Antifa day. Did you bring your dress up stuff? Did you bring your silly string and your milkshake? That’s how ridiculous this is becoming and it’s affecting the progressive movement in a negative way.

Farron Cousins:                  Okay, we ask well what does, what does that mean? You say, well, we’re for, we’re for equal rights. We don’t like bigotry. We’ll fantastic if that’s what you’re for, how about you go and join some of the protests and amplify the horrid conditions at these, you know, migrant camps down on the border. If you’re for protecting the environment as you say you are, how about you go join one of these pipeline protests and raise awareness about the leaks and the spills that come along with that? How about you join the lawsuit by the children trying to protect the climate? There’s a million things you can do to help make this country better. None of which involve assaulting a reporter.

Mike Papantonio:             None of which, none of which really hurt what the legitimate progressive’s are trying to accomplish.

Mike Papantonio:             Look, I don’t have anything in common with this right wing reporter, but by God he has a right to be where he wants to be and report what he wants to report and it, when we get to the point where we can’t think for ourselves, Antifa becomes very, very dangerous. Farron Cousins, thank you for joining me. We’ll, lot more stories out of their like this going around about Antifa. We’re going to cover some more of them.