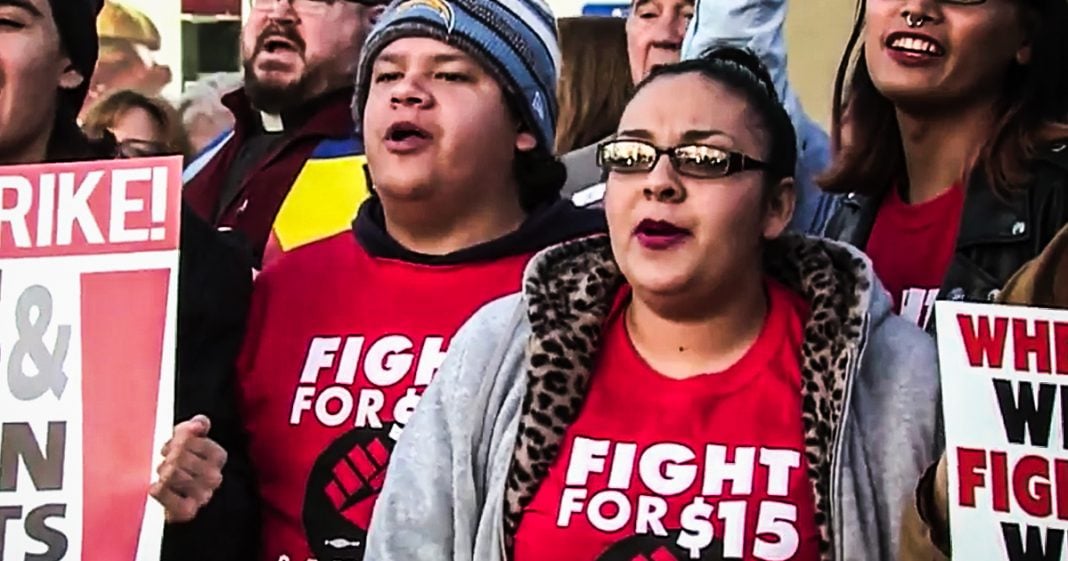 Republicans, corporate leaders, and even centrist Democrats have been arguing for years that raising the minimum wage to $15 an hour will destroy businesses and result in massive job losses. However, all of the evidence points to the exact opposite, with the latest round of data showing that jobs haven’t disappeared and corporate profits haven’t dipped in places where the minimum wage has been raised to $15 an hour. Ring of Fire’s Farron Cousins explains what’s happening.

Earlier in this week, a new report came out from UC Berkeley Center on wage and employment dynamics where they basically crunch the numbers and figured out what would happen in roughly 50 low income areas in the United States if the minimum wage were to increase to $15 per hour. These were various different places located all throughout the United States, some in the south, some in the Midwest, the northwest, the west coast. Just kind of a broad picture of what’s going to happen in these low income communities if we do succeed in passing a $15 minimum wage. And what these researchers found was that not only does it improve the living conditions of these people and lift them out of poverty in most instances, it also does not result in any job losses and it does not result in a decline in corporate profits. The two big talking points that we have heard from Republicans, from corporations and even from some centrist Democrats are totally bogus.

And here’s the kicker. We didn’t need this new study to tell us this because we can already look at what’s happening in the places where the minimum wage has been raised to $15 an hour. There have not been rampant job losses. Most of the areas have actually increased the number of jobs. There has not been steep economic decline. Corporations haven’t had to close their doors and move out of town. None of those scenarios have happened. Even though we were told repeatedly that if we raised the minimum wage to $15 an hour, get ready for the apocalypse or the apocalypse didn’t come. You know, it’s a lot like the people who said that the end of 2020 was going to be the end of the world and yet here we are, world keeps on spinning just like those economies that are now doing so much better because we’re actually paying people a living wage.

And that’s what this study was trying to tell us because right now we actually have some Democrats who are pushing for a minimum wage increase, but not all the way up to 15% they’re trying to water down that initiative by saying, well how about we just adjust it, you know, for, you know, average income in this area. So, so the minimum wage in Alabama wouldn’t actually be $15 per hour. We’ll give them, you know, 10 or $11 an hour. You cut it down a bit that, that, that’s not good enough. That doesn’t do it. Okay. So a minimum wage worker in Alabama suddenly raises the wages of people who weren’t making minimum wage but still weren’t getting $15 an hour. How was that a bad thing? How does raising the wages of everybody in those areas result in bad things happening? Yeah. The first couple of weeks corporations are paying more because they’re giving people more money, but you know what happens after those first couple of weeks, months, whatever it is, but fewer than three to four months as we’ve seen in practice, those people who suddenly go from making seven 50 an hour to $15 an hour, they spend it.

Not necessarily because they’re bad with money as I’ve explained, but because they have to or in some instances because they finally can do the things they have wanted to do. Maybe they’ve wanted to buy that new TV but couldn’t afford it. Maybe they’ve wanted to every now and then go out to a dinner with their family and now they can. All of that puts money back into communities. Maybe they can get their car fixed. Maybe they can pay off a medical bill for God’s sake, but none of that can happen if we do not raise the minimum wage to $15 an hour at least. And that’s what this new study has shown us. That’s what past studies have shown us, and that is what has happened in areas where this has actually been put into law. There is no reason why we cannot have this as a federal law. The federal minimum wage of $15 an hour, and even though some centrist are trying to fight that, we cannot accept anything less than that.