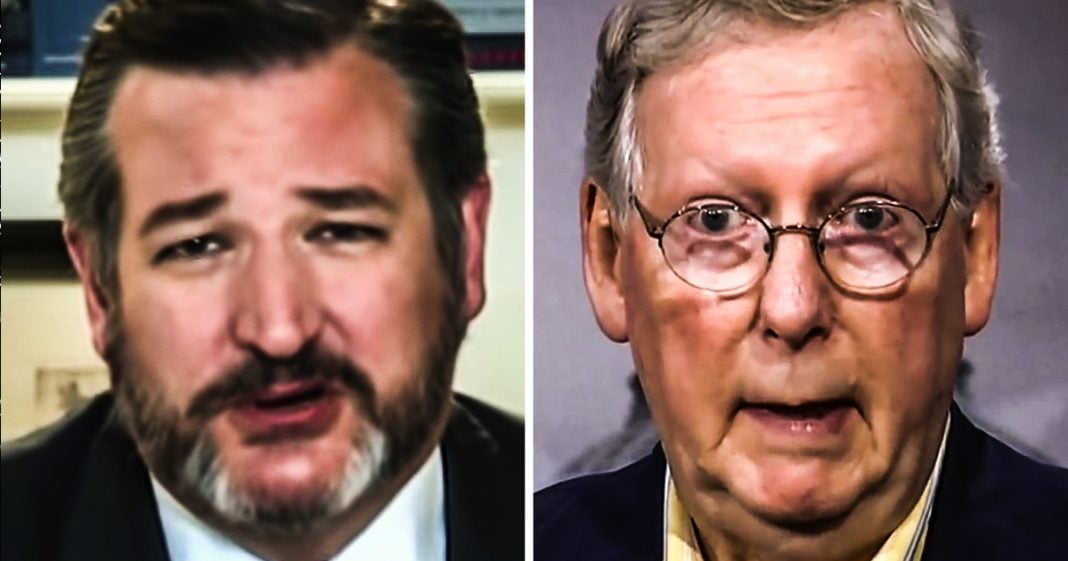 Republican politicians and conservative talking heads are freaking out over Nike’s decision to not produce a shoe featuring the Betsy Ross flag, prompting many in the GOP to accuse Nike of being unAmerican. But what they’re really angry about is the fact that it was allegedly Colin Kaepernick who informed Nike that this particular flag had become a symbol of hate, and he’s 100% correct. Ring of Fire’s Farron Cousins explains what’s happening.

Farron Cousins:             Republicans in the United States. Everybody from Republican politicians to conservative talking heads are finally addressing one of the biggest issues facing the United States today. But it’s not the deplorable conditions of the migrants on the southern border. It’s not climate change. It’s not the rising cost of healthcare and college. Note conservatives right now are raising holy hell about a pair of shoes. Conservatives from Ted Cruz to Mitch McConnell to Weirdos all over Twitter. Fox News devoted multiple segments to it all throughout Tuesday. They are ranting and raving about the fact that Nike is not going to be producing a pair of shoes featuring the Betty Ross flag on the back of them and according to reports, the reason they’re not going to produce the shoe is because a Colin Kaepernick who has a sponsorship deal with Nike told the organization that, hey, a, that flag represents a pretty crappy time and us history for very obvious reasons.

Oh, and not to mention the fact that that flag is now been co-opted by white nationalist organizations. A big story in rolling stone explaining how over the years these groups a filled with hate have actually been using that flag as their symbol, as a, uh, kind of metaphor for returning the United States to that time when only white people had rights. So yeah, probably not a good idea to slap that on the back of a sneaker. But nonetheless, Republicans have renewed their calls to boycott Nike, which I thought they already were boycotting Nike after they did agree last year to hire Colin Kaepernick as their spokesperson. But I guess now we’re in a super boycott, which means you doubly cannot buy Nike shoes if of course you love America because according to the Republicans, that’s what this is all about. It’s about who loves America the most. And clearly Colin Kaepernick doesn’t. Here is what one conservative, uh, popular on Twitter. Pastor Greg Locke here is a little video he posted about how much he is pissed off about this damn pair of shoes. Here it is.

Greg Locke:                  “Hey guys, pastor Greg Locke here. So the number one trend in the world right now is the fact that Nike has compromised and pooled their new shoes for the 4th of July because they have a Betsy Ross American flag on the back of them because of all people, Colin Kaepernick complained as a spokesman. Oh my goodness, I’m offended. Colin Kaepernick. Dude, you’re offended by everything. And then people want to hail him as a hero. Oh Colin Kaepernick’s a hero. That’s like saying big bird should be an Avenger. He’s not a hero. He’s not fighting for the rights of black people. He’s causing more trouble for black people than anybody else on the face of the planet. That’s a hands down fact. The guy’s the most flaming liberal leftist, non-American in the world. He should just buy a jumbo jet ticket and fly somewhere would be hates America. So much shame on you. Nike. Shame on you for siding with an anti-American fool. Yes, I said it. This is ridiculous.”

Farron Cousins:             Well, there you have it folks. If you don’t support stomping on the Betsy Ross flag, every time you take a step, you’re somehow on American according to that whack job there. Here’s the truth. According to the US flag code, you are not supposed to wear the American flag as clothing or on your clothing at all whatsoever. Period. End of story. So Nike not producing these shoes with the Betsy Ross flag on the back is actually more patriotic than the Weirdo saying that we should have it on our shoes. But you again, you’ve got everybody from Ted Cruz Shade Wall. I’m never going to wear a pair of Nike’s again. I’ve been wearing them since I was a kid. Mitch McConnell tweeted out, hell, I’ll be the one to buy the first pair of Nike. Just please make these shoes. You have other Republicans, Arizona governor, a Doug Douchey said his state is going to pull all incentives they have for Nike in the state. Republicans are overreacting to a pair of shoes folks. And again, most other news outlets in this country right now are focusing on, on the deplorable conditions that we’ve learned about, about the migrants along our southern border. You know, the real issues, the thing that actually matter, humanitarian issues. And meanwhile, conservatives, big and small alike are out there ranting and raving and having hissy fits over a pair of shoes.