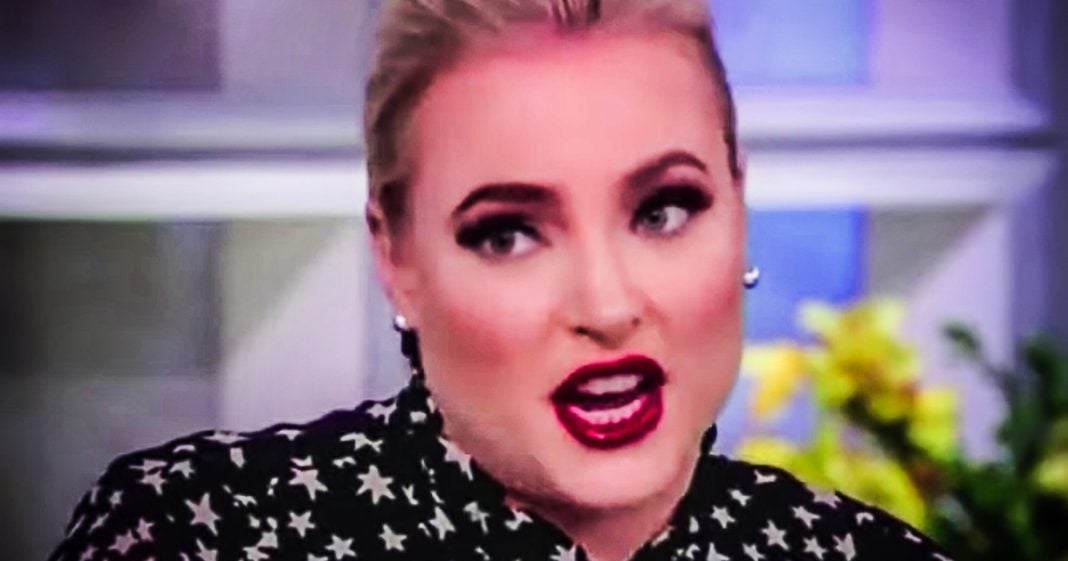 Meghan McCain is no stranger to negative publicity, and she has earned every bit of it. Her bizarre takes on issues and her defense of a Party that routinely attacks her late father have turned most of the public against her, and now sources are saying that she might be leaving The View because she’s sick of this ridicule. She needs to understand that SHE is the problem, not the rest of the world, as Ring of Fire’s Farron Cousins explains.

Meghan McCain, one of the cohosts of The View on ABC is super sad and mad and might actually be leaving the show once the current filming season ends according to a report by the daily beast sources close to Meghan McCain said that she feels quote like a caged animal and is not happy with the way things are going at The View. And there’s several reasons she is not happy. First and foremost, she does not like the uh, antagonistic personalities of her co-hosts right there on The View. Meghan McCain obviously is a conservative. She goes out there, spouts, conservative talking points and gets shut down pretty easily and very quickly by the more liberal cohosts there who fight back with facts and statistics and logic. Meghan McCain doesn’t have any of those to back up her talking points. So of course she feels like an idiot. And then the second part of it, which is tied to that is that when she gets made to look like a fool, those stories go all over the Internet.

Social media blows up with it. Everybody making fun of Meghan McCain because she can’t defend her own views. And gets easily shut down by liberals because Meghan McCain doesn’t know what she’s talking about. So according to her friend’s confidence, whoever the folks that spoke to the daily beast here, she’s sick of it. She doesn’t like the reticule, she doesn’t like the mocking, she can’t take it anymore. Show she is considering leaving The View. But here’s the thing, Meghan, you’re going to get ridiculed wherever you go. If you continue to argue the way that you do, if you want to be in this business, you got to have a little bit thicker skin. If you want to go out there and give your political opinion, you better be prepared for other people to throw it right back at you and you better be prepared to defend it in a way that makes you look smarter. Not dumber, but that’s not what you’re able to do because you don’t really know what you’re talking about cause you have no qualifications to be sitting on TV. The only qualification you have is that your dad was a senator.

That’s it. That’s the only thing on your resume was that my dad was John McCain. Put me on TV and they did. And now you’re mad because people are making fun of you because you got a job that you weren’t qualified for. That’s the problem. Meghan and running away from ABC is not going to fix that problem. You can go to Fox News if you want. You’re going to find more friendly people over there. Who am I to agree with you a little bit more often. But you’re still going to face the same kind of ridicule online because you don’t know what you’re talking about. And if you do go over somewhere like Fox, you’re going to get even more ridicule because you’re just going to be encouraged to say more outrageous and stupid things like everybody else on that network is a lose situation for you. But this is not the line of work that you need to be in.

Other reports have come out showing that you are petulant and horrible to the staffers at ABC as well. So not only are you bad at politics, but from some of the other reports that we’re seeing, you’re also just bad at being a human. Give it up. Go Away. Nobody in this country needs your opinion. Nobody in this country wants your opinion. You can go have a nice, fun, quiet life. Do whatever the hell you want. Find a different job in a better field. Maybe learn to respect other human beings. And I promise you that once you learn to do that, people are going to start respecting you just a little bit more. But that’s the thing about life, right? You get out of it what you put into it. And if you’re treating people like crap behind the scenes there at ABC, then don’t get on Twitter and whine about people being mean to you because they’re just dishing out back to you what you are a pound apparently dishing out to everybody else who you feel is beneath you.