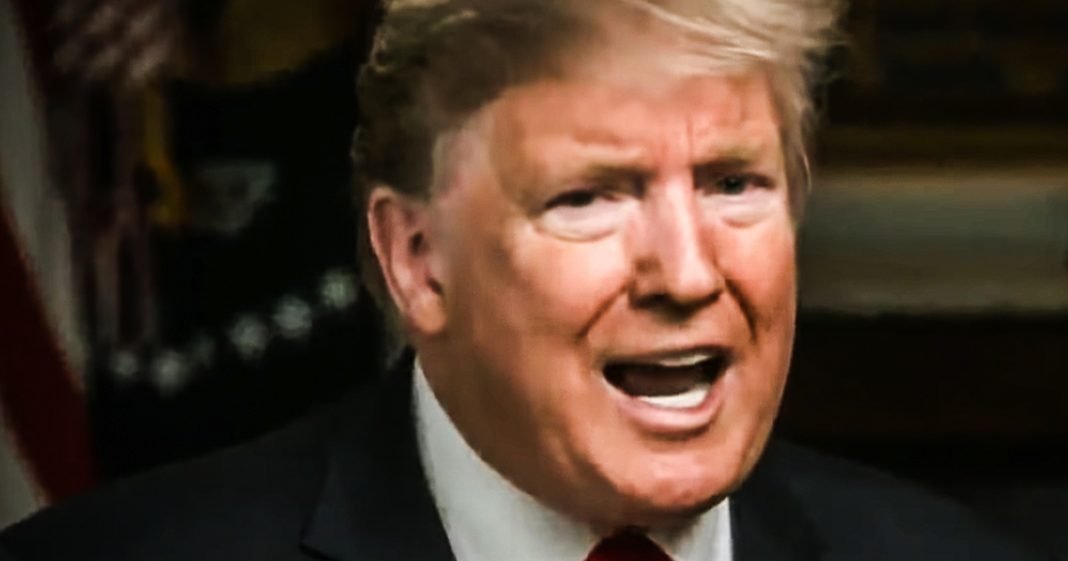 Democrats in the House of Representatives have finally filed a lawsuit against Donald Trump to force him to hand over his tax returns to the Ways and Means Committee. Democrats want to make sure that everything is on the level and that there are no instances of fraud or other crimes hiding in those tax returns, or even just conflicts of interest that would prevent the President from faithfully executing his duties. They have the legal right to obtain these documents, and Trump is in for yet another losing legal battle. Ring of Fire’s Farron Cousins discusses this.

You know, something really interesting happened on Tuesday, early in the morning, a popular story was going around social media from Huffington post saying, why have Democrats stopped caring about Donald Trump’s tax returns? And just as that story was kind of going viral, and another story came out, it said, the Democrats have filed a lawsuit against the Treasury Department and the IRS to force them to turn over Donald Trump’s tax returns. So the first story, I guess, was a little bit a little bit premature because it turns out Democrats hadn’t forgotten about Trump’s tax returns. This is a legal battle and a subpoena battle that they have been fighting for several months. And yes, it did appear that they had forgotten about it or stopped caring about it, but they surprised us all. It said, oh, no, no, no. We were still working on this. And now we’re suing to get our hands on these documents that we are legally according to the constitution entitled to receive.

Actually, I don’t know if it’s constitutional, but it is a written law here in the United States, I believe 1924 the law was written, uh, that said that the House of Representatives does have the authority to get their hands on pretty much any citizens tax return for any reason. They so choose. So yeah, the law is on their side. But Steven Mnuchin with the Treasury Department along with the head of the IRS, have repeatedly said, we’re not going to comply with your subpoenas. We’re not going to turn over Donald Trump’s tax returns because you’re going on some kind of partisan witch hunt and we’ll see you in court if that’s the way you choose to handle this. And Democrats said, alight, saddle up, let’s go. And that’s what’s happening right now. So here’s the thing, Republicans don’t really have a leg to stand on this particular issue. The law is very clear.

They have the authority to do this. The House Ways and means committee can do this. And that’s why they’re suing to get their hands on these documents. They don’t even have to have a reason. They have the authority to request the tax returns of any United States citizen. Donald Trump is a United States citizen. They can get his tax returns, end of story, but here’s the other part of it. This administration is going to fight tooth and nail to prevent that from ever happening because Donald Trump has something to hide and that’s I think exactly what Democrats want to find out. What are you hiding? Is it something innocuous like maybe you’re not worth as much money as you say you are and it’s just going to embarrass you a little bit, or is it something more sinister? Is there evidence of financial fraud, evidence of bank fraud that we can put up against what you’ve told banks in order to get money out of them?

Is there potential money laundering? Are you profiting too much off the presidency? You are profiting at all. Are there major massive conflicts of interest? What is hiding in those tax returns? The American public has a right to know and that’s what this all boils down to. Maybe the Democrats are engaged in some kind of partisan attack on the president to embarrass him. One of that I say good because this guy broke with decades of tradition of releasing his tax returns, still refuses to do it has offered us numerous different lies to defend his not releasing the tax returns, and it’s time that the American public learns the truth. What is he hiding? Because you’re kidding yourself if you think there is nothing that this man is trying to keep secret from the American public. If he had nothing to hide, this information would have been made public years ago. It wasn’t. He has repeatedly refused to do it. His staffers, his appointees have refused to comply, comply with congressional subpoenas, and there is a reason for that. And at this point, the reason can only be that Donald Trump has something very serious that he doesn’t want the rest of us to know about.