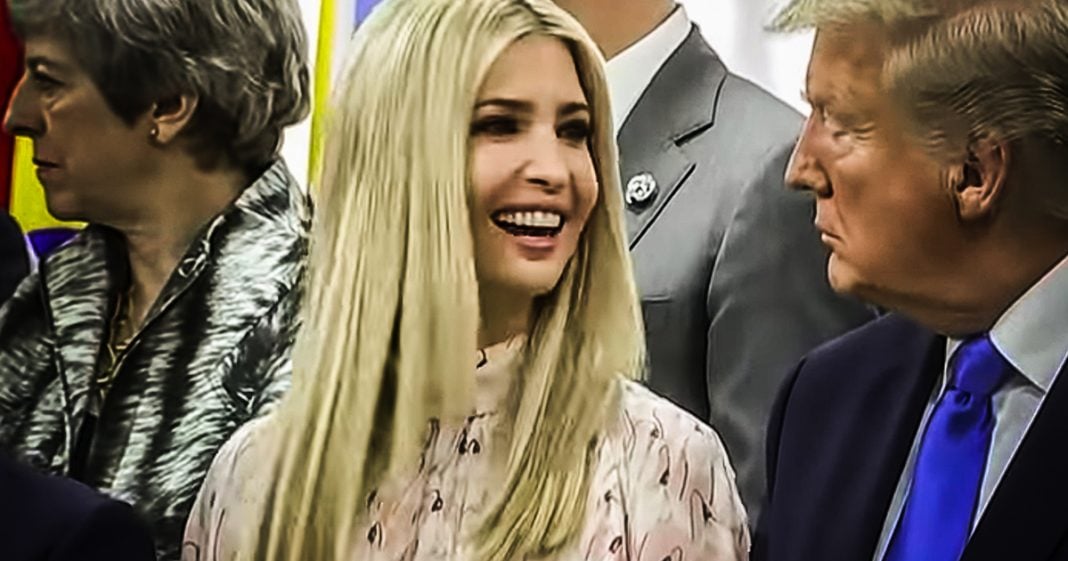 According to a new report from The Daily Beast, White House staffers are furious over the amount of coverage that Ivanka Trump is receiving after traveling with her father to the G20 summit. They appear to be both annoyed by accusations and embarrassed by her actions, and the whole situation is creating quite a massive headache for them back here. Ring of Fire’s Farron Cousins explains what’s happening.

According to a new report in the daily beast. White House staffers are absolutely furious with Ivanka Trump because after this past weekend, the G20 Summit, Ivanka Trump is the one who stole all the headlines, her viral video of her looking like a complete moron. Everyone on the planet has had the opportunity to see it at this point, and White House staffers could not be more angry and there’s several reasons. First and foremost, according to this report, they’re not huge fans of Ivanka’s, but they also understand that you really can’t see anything bad about her because you know that’s the president’s daughter and you don’t want to piss him off. In fact, here’s the exact quote, she matters because the president says she matters who in their right mind would cross her knowing that it’s according to one official who spoke with the daily beast on the condition of anonymity. But here’s the thing, they’re actually really mad about the fact that Donald Trump goes into North Korea, first sitting president, crossover into the demilitarized zone, shake hands with this guy, walked down that little a sidewalk and they thought, hell yeah, this is a big success, a great thing for the president of the United States. What could possibly go wrong?

And then I guess they all opened up their Twitter apps and realized, aw crap, that video of Ivanka is everywhere. I can’t escape it. I can’t get around it everywhere I turn. I see her standing there trying to awkwardly ease into that conversation and just, uh, yeah, oh yeah. And nobody cared what she had to say because they don’t respect her and they don’t trust her and she’s way out of her element. And that is what has captured all of the headlines. And so the White House staffers are furious because they thought they had a win. And by God they needed a win because things have been really bad for them since pretty much day one. But maybe there’s one time Trump doing this thing that nobody else did because they had enough sense to not do it. Maybe this would be it, but Ivanka man, poor Ivanka coming along and ruining her father’s great achievement just by being herself. But that’s not the only reason they’re mad at Ivanka.

They’re also mad because they’re having to go out there and fight back against accusations that both Ivanka and her idiot husband, Jared Kushner, actually accompanied Donald Trump to the closed door meeting with Kim Jong Un that, for some reason, nobody else got to see and they’re saying, no, they weren’t in there. They did. Obviously they went into North Korea. They met Kim Jong Un, but they totally weren’t at that closed door. No cameras allowed. No recording devices meeting. Right. And we can totally take their word for it.

They would have no reason to lie to us about something like that, especially after we’ve seen how stupid Ivanka is when put on the same stage as other world leaders, these people to be angry, they have every right to be angry, but they should also remember that if you’re angry about the president’s daughter, you should also be angry with the president and you should also be angry with the fact that you’re staying in this job that is obviously never going to be rewarding. It’s not going to get you a better job in the future. It’s just going to be hell on earth until the day you finally walk out of that White House and never look back.