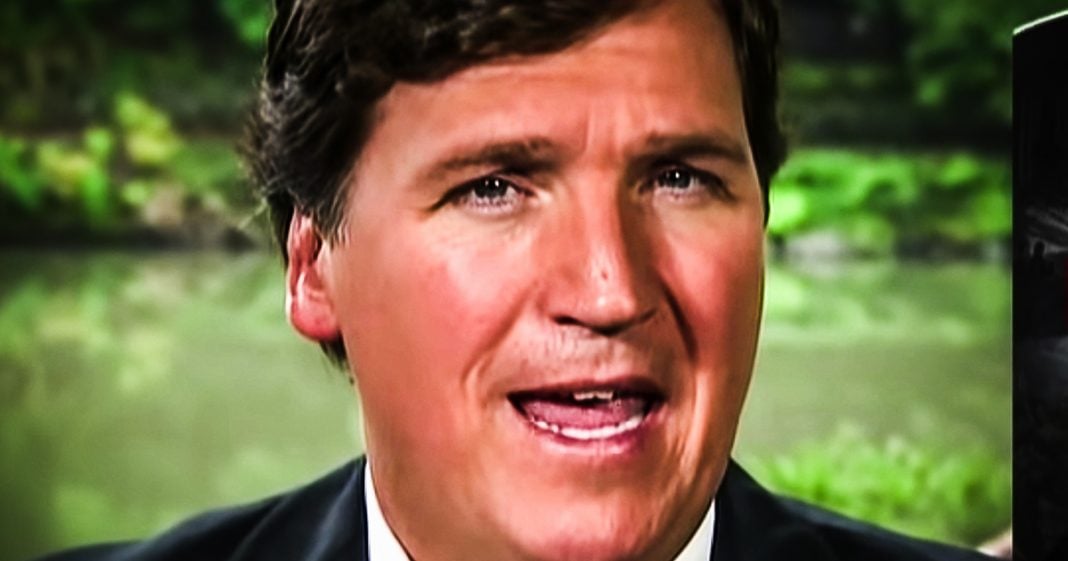 Tucker Carlson traveled with Donald Trump to North Korea over the weekend, and while there, he decided to call into Fox & Friends to tell the hosts what it means to be a leader. Carlson said that he understands why most people are skeptical of Kim Jong Un, but at the same time being a leader means that sometimes you just have to murder a lot of people. Ring of Fire’s Farron Cousins discusses this bizarre statement.

Farron Cousins:             For some reason, Fox News host Tucker Carlson got to travel to South Korea with Donald Trump. When Donald Trump decided to crossover into the demilitarized zone into North Korea to meet with the leader Kim Jong Un. And on Sunday morning, Tucker Carlson gave a call in interview to Fox & Friends where he offered one of the most insane defenses of Kim Jong Un’s brutal dictatorial regime. Here it is.

Fox & Friends Host:                     “That’s the type of thing that does make some people nervous though. He recently, Trump has on Trump recently made a comment about having a certain type of good chemistry with Kim Jong Un. And that may be true, but when you’re talking about someone who has been responsible for so many human rights abuses, does he want to risk with that kind of language of a coming off to Kim Jong Un like he’s pandering to him to an extent or be upsetting the American public that that elected a president, that they want to stand firm and be tough on those human rights violations and stand firm on American principles, which exists in virtually complete contrast to how the North Korean or regime is wrong.”

Tucker Carlson:             “Yeah. I mean, there’s no defending the North Korean regime, which is a monstrous regime. That’s the last really Stalinist regime in the world. It’s a disgusting place, Eh, obviously it’s so, there’s no defending it. On the other hand, you know, you got to be honest about what it means to, to lead a country. It means killing people, not on this scale that North Koreans do, but a lot of countries committed atrocities, including a number that we’re closely allied with. So, you know, I’m not a relativist or anything, but if it’s important to be honest about that, and it’s not necessarily a choice between, you know, the evil people in the great people, it’s a choice most of the time between the bad people in the worst people. That’s just kind of nature of life and certainly nature for a power.”

Farron Cousins:             You know, my favorite part about that little clip right there is the fact that he’s like, oh, of course you can’t defend them. They’re awful. It’s horrible over there. It’s, it’s filthy. On the other hand, that’s literally you guys. Yeah. On the other end, sometimes you just got to kill people. Right. It has got to go out there and mow them down. I guess like weeds that have overgrown in your lawn, right Talker, and I guess that makes it okay or the fact that the u s is also friendly with other regimes who do the same thing like Saudi Arabia like that, that makes this, okay. No, it is not okay in any capacity, and in fact that is why former presidents refused to go over there to talk to him because they know what a psychopath he truly is. Donald Trump on the other hand says, I’m going to do this because nobody else could do it. Oh No, no, no, no. They could have. They were smart enough not to, and now I’m not saying that we shouldn’t have some kind of relations with North Korea, but those relations need to come in the form of demands.

He treat his people with dignity that he stopped murdering them and that he releases all those political prisoners from those concentration camps that he’s running. That’s the kind of thing that we need to have with North Korea. Once they do that, then sure. Let’s sit down at the table. Let’s meet for dinner, let’s do whatever the hell we want and have these good diplomatic talks. But not until you make those concessions. As it stands right now, Kim Jong Un has not done a single thing that Donald Trump’s set out to get him to do. On the other hand, the United States has pulled back some of our activities in the area. We’ve reduced the number of military exercises we’re doing with South Korea. You know, we’ve gone against the will of both South Korea and Japan over the last year who’ve said, please don’t, please don’t do this. Please don’t give into their demands.

But Trump said, no, I’m going to do it anyway because North Korea is super serious about reducing their nuclear capabilities, but oh, they’ve actually been increasing those and now they’re testing more missiles that could hit South Korea or Japan. The very people who are worried that North Korea was going to make missiles that could hit South Korea or Japan if the United States pulled out. Trump has given North Korea everything they want, and Tucker coming out and saying like, oh, wait. Yeah. Sometimes you got to kill people. These men are insane. Both Kim Jong UN and Donald Trump. And you know what? Let’s go ahead and throw Tucker Carlson in there too. This is an insane defense of a mad man who murders people. Just because, I mean, let’s not forget the reports that came out recently that Kim Jong on at a a airport runway in North Korea actually killed the people who were present at the last meeting you had with Donald Trump because he thought one of them was a spy, killed him on the runway according to reports, and this is the kind of guy that Tucker Carlson’s defending.

It’s the kind of guy that Donald Trump shaking his hand and having a very awkward walk with. And I mean that in quite a literal sense. They were both walking like something had happened to their legs. It was very weird to watch. But nonetheless, this is not the kind of guy that should be our friend. This is the kind of person who seriously needs to revamp his country before anyone should take him seriously. That’s what past presidents believed. That’s what most other countries in the world believe, but not Donald Trump and Tucker Carlson because they understand that sometimes you just got to kill some folks right.