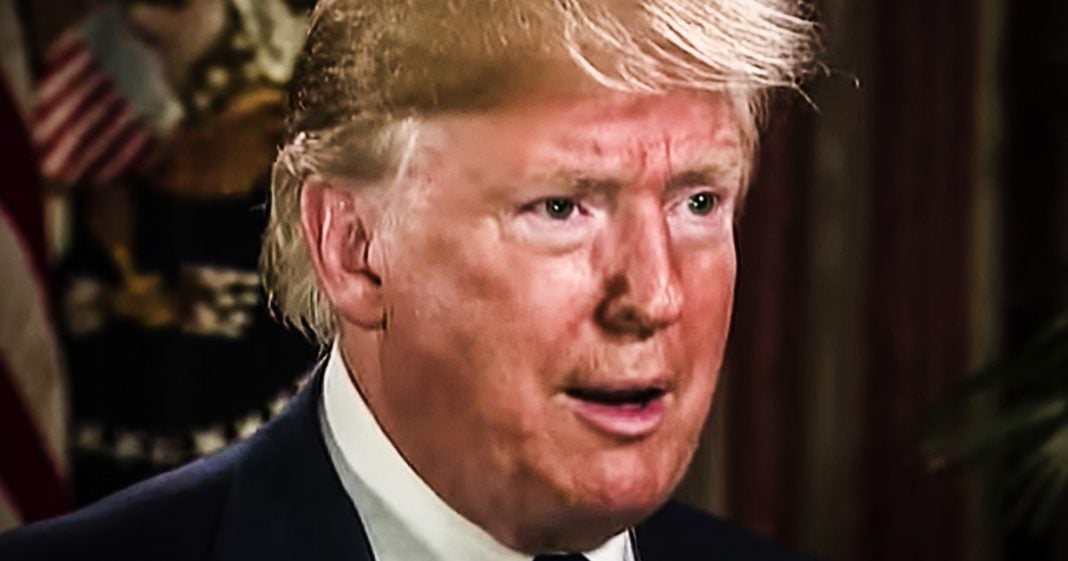 Donald Trump is not backing down on his desire to have an authoritarian-style military parade, and with only a few days left until the 4th of July, he’s still demanding that Army tanks be present at his taxpayer-funded event. Not only is this an idea that past presidents had condemned during their times as childish and foolish, but it would also destroy infrastructure in Washington, D.C. Ring of Fire’s Farron Cousins discusses this.

Well folks, now we’re just two days away from Donald Trump’s 4th of July. Spectacular held at the Lincoln Memorial, going to cost millions of dollars. The tax payers are going to have to pay. There’s going to be a VIP section for Donald Trump’s friends that tax payers are also going to have to pay for, and if Trump gets his way, there’s also going to be lots of tanks and other military vehicles present because why not? Right? Donald Trump for the longest time has been fascinated by these military parades that you typically see in authoritarian regimes. North Korea is a huge fan of them and as we’ve found out recently, Donald Trump is a huge fan of North Korea, but here’s the thing, he wants tanks. He is demanding to have tanks present at the Lincoln memorial show that what you can feel like more of a man so that everybody on the planet can see you overcompensating for what we all suspect for what stormy Daniels already made public because that is what literally everyone is going to think because psychologists would tell us that is exactly what you’re doing.

Trump, you’re not fooling anybody. Having a big massive tank next to you is not going to make your steak and potatoes look any bigger is it? But you think it will, but here’s the thing. Not only is this going to cost us millions of dollars and make Trump look like an idiot, it’s also going to destroy the infrastructure in Washington d C I don’t know if most people realize this, but you can’t exactly just drive a tank down the road. It is going to destroy it. Most of these vehicles way in excess of 60 tons. Yeah, your average street and DC is not equipped to have that kind of weight upon it nor other bridges, but Trump doesn’t care. He’s also going to have the blue angels fly over, which is the largest waste of taxpayer money in the United States, and I live in the area where the blue angels are housed, Pensacola, Florida, and my God, if you ever say anything bad about the blue angels, they treat you like you’re some kind of a evil horned demon because you don’t like the Blue Shiny planes making a loud noises. It’s a waste of millions upon millions of dollars, not just the blue angels. This entire charade by Donald Trump, and he’s doing it to overcompensate for his lack of something, right? We understand what this is about, but let’s also not forget that at the same time, we’re having to spend millions upon millions of dollars for this idiotic parade.

We have people in this country who can’t afford to pay their medical bills. We have a massive student loan debt crisis. We have children locked in cages who don’t have toothbrushes or soaps, and according to recent reports, some of them are having a drink out of toilets, may. Maybe we could spend some of that money on them instead. Maybe just buy a couple of nice fireworks. Shoot those off. You don’t need the planes. You don’t need the tanks, you don’t need the other military vehicles. You don’t need to look as weak and pathetic as a country like North Korea because that is why they do it and that’s not coming from me. That’s actually coming from Dwight Eisenhower many years ago, many decades ago, actually, Dwight Eisenhower actually had considered for a while doing something similar, but then he decided against it because he realized how stupid it would look. Here is his exact quote. This is what Eisenhower had to say about this kind of show of military, uh, props.

“We, the United States are seeking peace. We are the preeminent power on earth for us to try to imitate what the Soviets are doing in Red Square would make us look weak.”

And that is exactly what Donald Trump is going to do to this country by holding his little military style parade so that the rest of the planet can see him standing next to that big tank and think that it actually translate to a big something else.