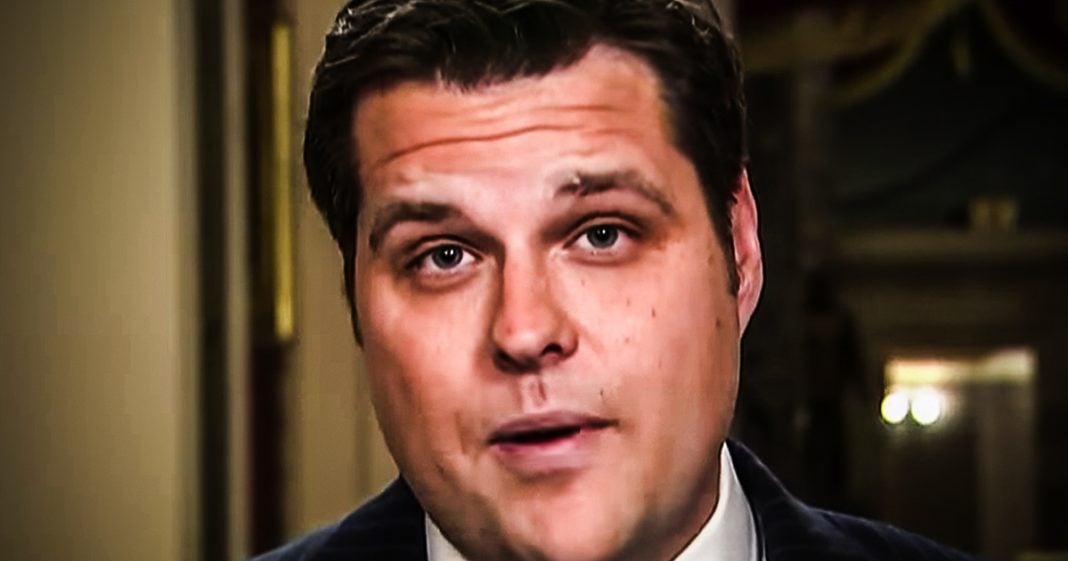 Republican Congressman Matt Gaetz is finally being investigated by a House Ethics Panel for his alleged witness tampering and intimidation of Donald Trump’s former lawyer Michael Cohen. Gaetz is also still being investigated by the Florida Bar Association for the same offense. Gaetz has lived a life without consequence, much like Trump, and he’s now finding out that his daddy can’t save him from everything. Ring of Fire’s Farron Cousins discusses this.

Republican Representative Matt Gaetz is still in a lot of trouble over his, a tweet a few months ago where he basically threatened Michael Cohen the night before he was going to testify to Congress about some of the things Donald Trump has done over the course of his career. And now Matt Gaetz is being investigated by a house ethics subcommittee. And the reason for that is because Gaetz himself had been offered the opportunity to come in before the ethics, uh, panel and explain exactly what the tweet was meant to do. What was it about? Why did you do this? Just tell us Matt Gaetz so that we can move on from this. But Matt Gaetz said, no, I’m not going to Grant your interview requests. I’m not going to talk to you about this. I don’t have time to deal with this. And recently in an email statement, he said, if members of Congress want to spend their time psychoanalyzing my tweets, it’s certainly their prerogative.

I won’t be joining them in the endeavor. Wow. Really seems like you could have just cleared all this up had you just gone and sat and talk to them about it. Right. But you don’t want to do that because you know exactly what your tweet was designed to do. And in case anyone forgot here is that tweet.

“Hey, @MichaelCohen212 – Do your wife and father-in-law know about your girlfriends? Maybe tonight would be a good time for that chat. I wonder if she’ll remain faithful when you’re in prison. She’s about to learn a lot.”

About to learn a lot. Now, that simple little phrase makes it seem like Matt Gaetz is about to spill some kind of beans about Michael Cohen. Again, this was the, a tweet from, I think it was back in February, the night before Cohen testified. Oh, they’re gonna learn a lot. Gaetz was ready to tell the whole world unless Michael Cohen, of course, was going to play ball. Maybe he needed to have that talk with his wife and father-in-law, or maybe he could just keep his trap shut about everything and then Gaetz could keep his mouth shut about everything.

And that’s what this health house ethics panel wants to figure out along with the Florida bar too because let’s not forget that Matt Gaetz has also for this particular tweet under investigation by the Florida Bar Association for potential witness tampering. I think it’s very clear at this point what Matt Gaetz intentions were with the tweet and that’s what matters. The intent. He wanted to scare Michael Cohen into not spilling all the goods about Matt Gaetz’s good Buddy Donald Trump and it backfired spectacularly and now Matt Gaetz doesn’t want to sit for an interview and explain to these congressional investigators exactly what he was trying to do because he doesn’t ever want to think that he has to face consequences for his actions because he’s never had to.

A lot of people joke about this online and we’ve mentioned in the past, but Matt Gaetz is a guy who at least once possibly more got arrested here in the state of Florida for driving under the influence. He got a DUI, got a mugshot and everything they hauled them in. But then as Daddy, who was a very powerful at the time, Florida politician made a couple of phone calls and suddenly Matt Gaetz gets let, let go. No punishment, no suspensions, have his license. He gets off the hook. No punishment whatsoever. Well, Daddy’s not around in Washington DC to save your ass this time. Is He Matt Gaetz? No, he’s not. And that’s what you’re terrified of because at every step through your life, because of your father’s powerful connections to Florida Republicans and corruption, you’ve gotten away with everything you’ve wanted to get away with it. But you thought, and this was your big mistake, that you could take that same mentality out of the state of Florida, but there’s nobody to protect you in Washington DC, Matt, and they’re going to investigate you and they’re going to get to the bottom of all this.

And I think you and I both understand where and how this investigation is going to end. And it’s not going to be very pretty for you, but luckily you’re in one of these safest red districts. In the state of Florida. So the voters here, which is actually where I’m sitting right now, probably won’t care too much to find out that their congressman is a witness, tampering a possibly even the guy to guy that loses his law license from the Florida bar. They don’t care. As long as you’re a good old boy, Republican, that’s all this area seems to care about. But the rest of the country is watching this very closely. So if you had political ambitions that stretch beyond the first district of Florida, I think it’s time for you to go ahead and kiss those. Good bye.