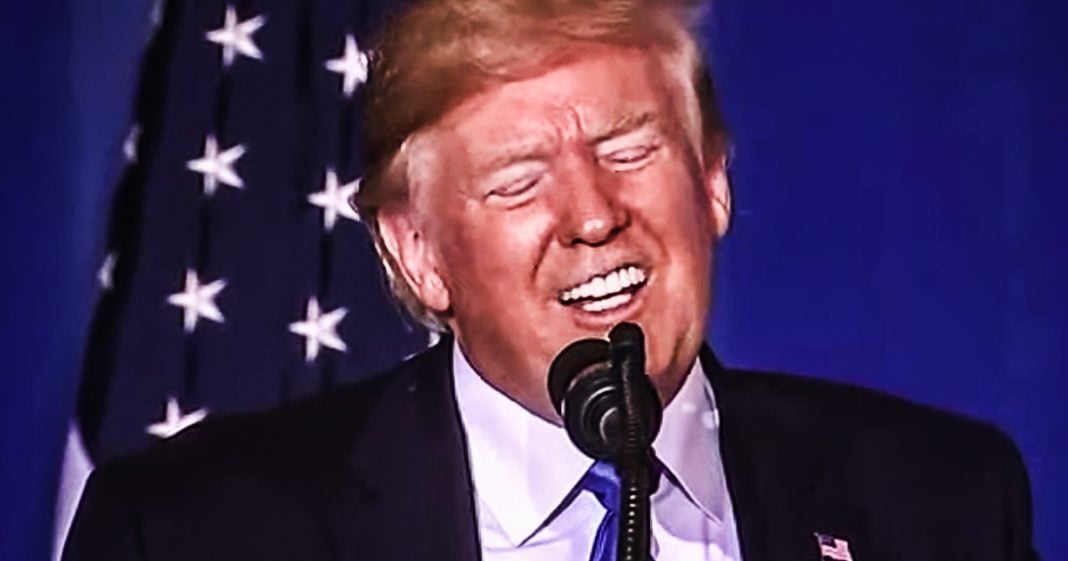 During the G20 Summit in Osaka, Japan, Donald Trump told world leaders that he wasn’t going to do anything about the growing threat of climate change, and he offered two reasons why: The first is because he doesn’t want to hurt corporate profits, and the second is because he says that our air and water is cleaner than ever. Those are absolute lies, and the rest of the world knew it. Ring of Fire’s Farron Cousins discusses this.

On Saturday while taking a break from the G20 Summit in Japan. Donald Trump spoke to reporters where he explained why he was trying to convince other world leaders that we don’t really need to address the issue of climate change. We don’t need to do anything about it. Here’s what Donald Trump had to say. He lays out his two reasons for why the U s doesn’t really care about climate change. Here’s what he says. I’m not looking to create a standard that is so high that we’re going to lose 20 to 25% of our production. I’m not willing to do that. We have the cleanest water we’ve ever had. We have the cleanest air. You saw the reports come out recently. We have the cleanest air we’ve ever had, but I’m not willing to sacrifice the tremendous power of what we’ve built up over a long period of time and what I’ve enhanced and revived.

So reason number one, that Trump says we’re not going to address climate change, which again, he spoke to a world audience and told other world leaders, this is, hey, I know I don’t. I don’t want to hurt our businesses, right? I mean, hey, those coal companies, they need to make money, even if it comes at the expense of human life, let them do it. Same thing with oil companies, any fossil fuel company, but hey, it doesn’t matter what they do, right? Because those reports you just saw say that we’ve got the cleanest air and cleanest water that we have ever had in the history of the United States, which is a physical impossibility, not, uh, not only is it a physical and possibility, it’s also a statistical impossibility because it’s simply not true. First and foremost, the air today could not possibly be cleaner than it was, say in 1780.

Right? I mean, everybody understands that, right? That that’s not physically possible. So when I say it’s a physical impossibility, that’s what I am referring to. But let’s talk about the numbers, right? Let’s talk about the fact that the United States in a, at least smog quality ranks. Uh, what is it, 123 out of 195 countries, we’re towards the back half of that list folks. And smog in the United States is killing 24,000 people every single year. And that’s what Donald Trump calls the cleanest air we’ve ever had. Water quality better than ever. Yeah. I dare you to go say that to the residents of Flint, Michigan, or to any of the other 110 million people in this country who every day have to drink water contaminated with PFOAs, PFASs chemicals and other harmful chemicals; 110 million. One third of people in this country drinking, contaminated, unsafe drinking water every single day. Things are worse than ever in those two arenas. Air Pollution and water quality. And yet Trump repeatedly tells everybody that, nope, it’s cleaner than it’s ever been. Why? Maybe it’s because he actually believes it, but I think more a likely is the fact that he thinks if he just says it enough, his supporters are dumb enough to believe it.

And there’s a distinction I want to point out. I am not in that sentence. I just said calling Trump supporters dumb. What I am saying is that Trump believes you are dumb. He honest to God, does all you mag a hat wearing Trump bumper sticker drive in cars? He thinks you’re dumb. He does, and that’s why he says things like this that we can verify and quantify as untrue, but if he says it enough, you’re going to believe it. And what gets even worse, not only did Trump say these stupid things on a national stage, but he was also working behind the scenes with countries like Saudi Arabia, Brazil, Australia, and Turkey to oppose the Paris climate accord.

This man was walking around at other world leaders telling them, hey, ditch the Paris climate accord, or at least get them to scale back their goals, right? Instead of being here, maybe we’ll take a here so you can still have a little bit of pollution, right? This man was undermining the work that other countries are doing to combat climate change when the United States should have been a leader on the issue. But for 19 years now, and in fact even a little bit longer than that, we’ve failed. We have failed Democrats and Republicans alike, and we’ve got some great environmental heroes serving in Congress today. But unfortunately they have not been able to do what is necessary because of obstruction from Republicans. And in many cases, democrats as well. The U.S. could have been a leader on this issue. But instead, after years of just kind of falling further and further behind, we now have a man in office who not only doesn’t understand the economic benefits of addressing climate change, he doesn’t understand the reports showing us that we’re just killing ourselves with the amount of pollution we’re ingesting every day. But now he’s actively going around to other countries trying to undermine the progress that they are making.