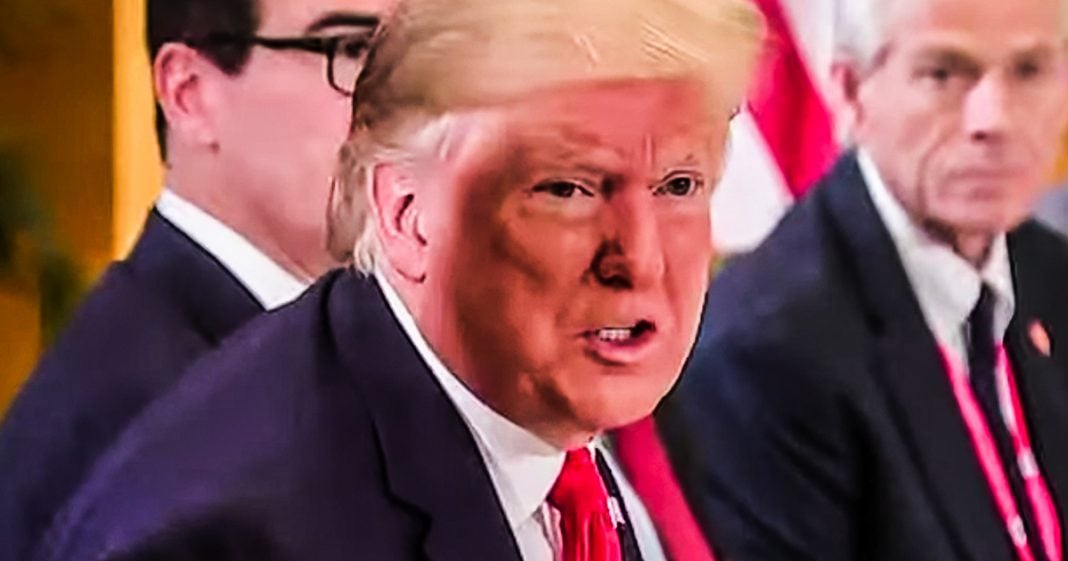 At a press conference during the G20 Summit, Donald Trump once again showed the entire world that he’s far too stupid to be running one of the most powerful countries on the planet. His remarks about “Western liberalism” and “busing” showed that he has no idea what those terms mean, and the entire world got to see just how low his IQ really is. Ring of Fire’s Farron Cousins discusses this.

On Saturday, Donald Trump did a press conference from the G20 Summit in Japan, and he showed during that press conference just how stupid he truly is. Now, this is no surprise, right? Donald Trump goes out there every day, whether it’s on Twitter, whether it’s walking to his plane and yelling something at the press. He shows us here in the United States how stupid he truly is. But what happened to the G20 was a little bit more unique because the entire world was watching. So it’s not like, okay, well, everybody in the u s they know I’m stupid. No, this was so the global audience could know that you are stupid. And there were two things that really stood out among them, the mini stupid things he said that showed just how incompetent this man truly is. The first he was asked about an interview that Vladimir Putin had done not long before a this press conference, and Vladimir Putin trashed Western liberalism.

So Donald Trump was asked, you know, hey, you, your friend over here, Vlad was a talking bad about western liberalism. So what do you think about that? And Donald Trump ended up going on a rant because he too hates western liberalism and by Western liberalism he assumed, they mean liberals living out west in the United States, in places like San Francisco. That’s what he was talking about. That’s what Trump was talking about, so he thought Vladimir Putin came out and did an interview talking about how mad he was at California. Democrats. No know what Vladimir Putin was mad about in terms of western liberalism was multiculturalism acceptance of the LGBTQ community. Those are things that Mr. Putin doesn’t like and that’s what he was referring to because he actually understands what words mean. He’s a horrible human being, but he knows what words mean. Trump, on the other hand is a horrible human being who also doesn’t know what things mean.

You need more proof. Let’s get right to it. The busing issue right here is what Donald Trump had to say when he was asked by a reporter about busing, which was brought up extensively, mostly between Kamala Harris and Joe Biden during the democratic debate on Thursday evening. Here’s what Trump had to say. Well, it’s been something that they’ve done for a very long a period of time. I mean, you know, there aren’t that many ways you’re going to get people to schools. So this is something that’s been done. It is certainly a primary method of getting people to schools.

So Trump thinks that busing, which was the policy institute in the 70s to help us, you know, re-integrate schools, he thinks busing actually just means children getting on a school bus. That’s, that’s what busing is to Donald Trump. And that’s what he just said in front of the entire world because he doesn’t understand us polities policies or US history. This man is show painfully ignorant about these issues that it makes every single one of us in this country look like an idiot. But nobody more so than the people who defend him. You know, when you see these Weirdos on Twitter that reply to everything, Trump says, they’re like, oh my God, we love you. We’re praying for you, Mr. President. God bless you. #MAGA #KAG. It’s constant. It’s all over the place. Then you see people, you’ve got this a weird looking, you know David Puddy from Seinfeld kind of guy, Bill Mitchell I think his name is, always out there defending Trump. You’ve got these religious leaders out there defending Trump. You’ve got Charlie Kirk, Tomi Lahren, Candice Owens, and all the other weirdos on the ride out there defending this man, and there is nothing left to defend. Now keep in mind, I’m not saying to defending him on this issue, I’m just saying in general, they will defend him. They love him, they praise him. They act like he has got himself, but the man is too stupid to even know how to spell the word God. And that’s what we need to focus on. Folks, we have had some dumb presidents in our history. We have had some dumb presidents so far this century, but I think his comments this past weekend at the G20 Summit prove that Donald Trump has by far the dumbest person to ever occupy the Oval Office.