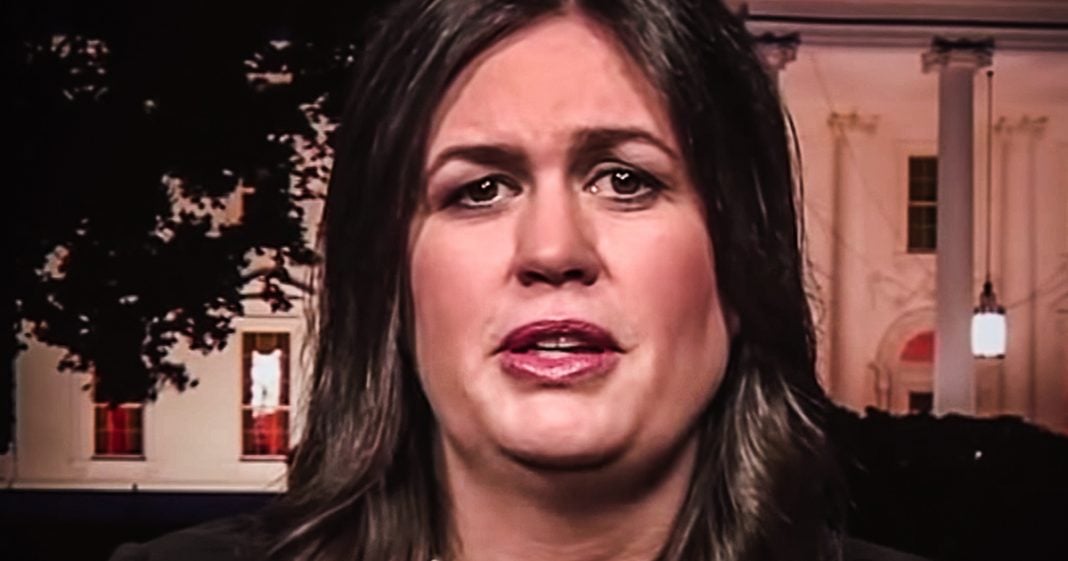 Former White House Press Secretary Sarah Huckabee Sanders is preparing to do all that she can to cash in on her time with the Trump Administration, and she is preparing to write a book and go on a paid speaking tour before ultimately deciding on whether or not she should run for governor of Arkansas. This isn’t going to work out as she expects, as Ring of Fire’s Farron Cousins explains.

Well folks, as of today, Sarah Huckabee Sanders is technically unemployed. She joins the ranks of the millions of Americans who do not currently have a job. After all, she retired, I guess you would call that from being Donald Trump’s press secretary at the end of June. Here we are first day of July. She does not have a job, but don’t feel bad for folks. She already has a plan that is going to make her a ton of money or at least she hopes it will. Well for starters, reports have been coming out for the last few days saying that Sarah Huckabee Sanders has already decided she is going to write a book about her time in the White House and everybody left or right. Probably going to want to go out there, scoop up this book, find out if she’s got any juicy tidbits. She wants to let hang out. You know, if she has any secrets about Donald Trump, she wants to tell us and also some people are going to pick it up just to see how much she’s going to lie between the covers. But here’s the thing. I don’t think Sarah Huckabee Sanders has been paying attention.

She hasn’t seen what’s happened to Sean Spicer. She hasn’t really paid attention to what happened to Anthony Scaramucci. But let me fill her in real quick. Sean Spicer and both Scaramucci are laughingstocks. Sean Spicer has struggled to find a new job. He has reportedly gone from news outlet to news outlet with a demo reel saying, please hire me. But even Fox News said, you don’t have any credibility. Why are we going to pay attention to you? Go Away. CNN said the same thing. He then shot lay a shot, like a talk show kind of pilot. I guess he was going to be the next Dr Phil. Yeah. That didn’t go anywhere because he ruined his entire reputation and his future earning potential. Working for Donald Trump colleges have also refused to sign him on as an adjunct or to sign them on as a guest lecturer or speaker or a temporary professor, whatever it is. Scaramucci on the other hand, yeah, he pops up on cable news from time to time, but he’s also a laughing stock.

He was with the administration for what, 10 days? I in his name has become synonymous with a very short period of time. We measure it and Scaramucci’s now. So yeah, he has no credibility to speak of and Huckabee Sanders is worse than both of them combined and she thinks she’s going to cash in writing her book and then going on a speaking tour where people would allegedly pay her tens of thousands of dollars to come and talk to them for an hour. Are you nuts? I mean seriously Sarah, is there something wrong with you? Do we need to give you a cat scan? Because if you think you’re going to go out there and find any credible organization willing to pay you tens of thousands of dollars just to watch you flap your lips for 60 minutes, you are sorely mistaken. Oh, I’m sure you’ll probably get invites from a turning point USA. Maybe a couple other of those far right groups, uh, funded by millionaires and billionaires while claiming well, we’re grassroots.

Yeah, they’re probably going to have you speak a couple of times, but then it’s going to dry up because what’s going to happen is that you’re going to say something incredibly stupid during one of those speeches. It’s going to go viral and you’re going to hurt your own book sales and possibly even a in danger. Your future political ambitions is, as we spoke recently about Sarah Huckabee, Sanders is currently mulling a run for governor in the state of Arkansas, which unfortunately she actually probably has a pretty good chance of winning as of right now. Her reputation is likely to decline if she writes this book and just has nothing but praise for Donald Trump and hatred towards the media and Liberals and Democrats and everybody else out there probably not going to go over so well for. But if she decides to dish a little dirt out there, maybe give us some secrets about Trump. Yeah, the book will make some money. Maybe then people will pay her, but unfortunately for her, that’s also gonna ruin all of her political capital and kill her future political ambitions. She is caught between the proverbial rock and a hard place at this point, and I can’t think of anyone who deserves that position more than she does.