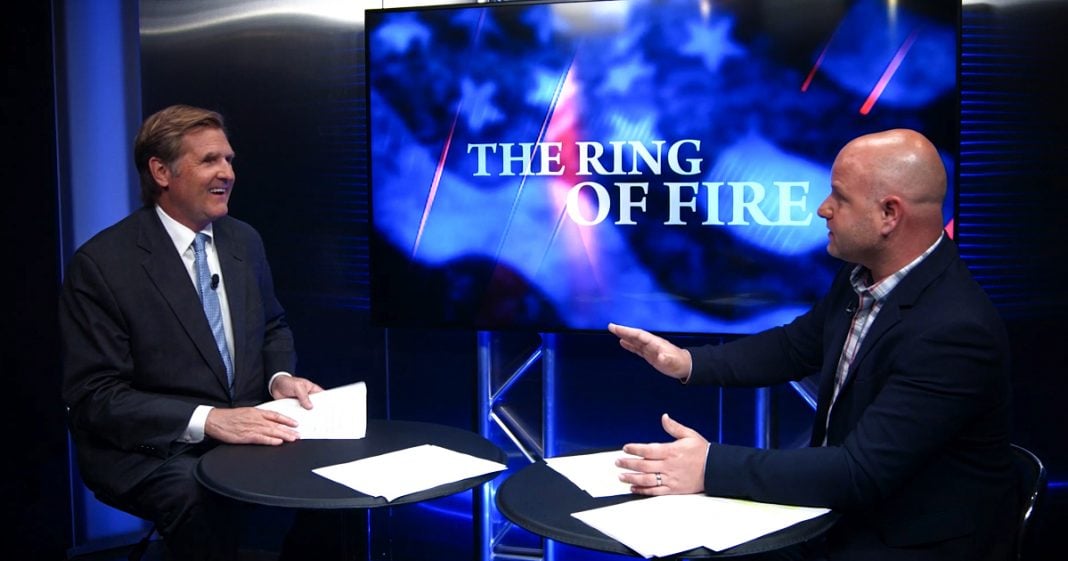 30 years ago, Nestle’s permit in San Bernardino expired, but that didn’t stop the Swiss corporation from continuing to pump water out of the most troubled aquifer in the United States. Ring of Fire’s Mike Papantonio and Farron Cousins discuss this.

Mike Papantonio:             Nestle has agreed for the moment at least to stop pulling water out of the San Bernardino national forest as they try to sort out this new deal with the government. I’m not even sure what the new deal with the government is because the government let these boneheads for years pump water out of the most out of an aquifer that is the most troubled aquifer in the United States. We got California, the California is on fire, right? They don’t have enough money to go along even around, they don’t have enough water to go around.

Even though they’ve had their, one of their wettest winters, they still don’t have enough water because these freaks, this Swiss company, has been drawing water out of the aquifer as deep as 450 feet. And so everybody said, well, we don’t have any. We’ll of course you don’t because you idiots didn’t do your job. Regulators didn’t do their job. And until these environmental folks came along and said, wait a second, they’re stealing our water and not paying for it.

Farron Cousins:                  Yeah, 30 years ago, 30 years ago, Nestle’s permit in San Bernardino expired, in 1988. So at that point they should not have been able to take a single drop of water out. But instead, not only did they keep operating for those 30 years, they were taking tens of millions of gallons extra per year than what their, their other permit had even allowed.

Farron Cousins:                  So, so they’re, they’re breaking the law operating without a permit. They’re taking more than double what the permit would have even allowed had it been renewed, but they just said, you know what, we don’t need to bother with renewing this. Nobody’s paying attention, obviously, so let’s just pump it.

Mike Papantonio:             This as no, if you had a well in your home, okay, and your neighbor just says, well, I’m going to, I’m going to use his water. Okay, I’m gonna just pump his water out. That is theft. That is, that really is a charge. You can be, you could be charged with theft. Here you’ve got Nestle, this Swiss company doing business over the United States. Nobody, do you know there’s been zero charges on this?

There has been zero criminal charges on this taken place. They’ve been stealing for 30 years. And if you went back, if these, if these regulators or the, maybe the Attorney General, or maybe the Department of Justice would go back in the emails of Nestle, I promise you what they would find is they would find Nestle bragging about the fact that they have this cash cow in California.

And yes, we know we’re affecting the water aquifer and yes, we know we’re taking the money without paying the water, without paying for it. But life goes on now they make a, you know, you’ll hear people talk about fracking and fracking is horrendous. What it does to the water table. It just poisons the water table and it makes it useless. Well, Nestle here, this is same thing as fracking. Only they’re stealing the water, they’re stealing it from taxpayers. And the government says, ah, you know, okay.

Farron Cousins:                  Well, you know, here’s the thing too. A couple of years ago, you had the CEO of Nestle come out and try to say that water is not a basic human right. Even though human life cannot exist without water, it’s not necessary because Nestle wants to go all around the globe and do what they’re doing in San Bernardino, which they pretty much are doing it all around the globe. Take as much water as possible, bottle it back up and sell it back to these communities for an astronomical profit. And if they run out of water, okay, Nestle can move to the next place. But those people that live in those areas can’t. They’re stricken with drought, you know, crop damage because all the waters been pumped.

So that’s the first hit. And it just so happens Nestle is like way high on the list as having the most contaminated the water that’s most contaminated with these little plastic shards that turn, they’re microscopic you, you can’t even see them. But if you’re drinking that water all day, it’s staying with you and it becomes systemic at some point.

Farron Cousins:                  We’ll add, you know, first of all, there’s no health studies on what these microplastics do to the human body. They know it’s not good, but they haven’t been around long enough for people to be able to study them and two, as you pointed out, Nestle is worst of all. But three, and this was the worst part of the story. When they pumped that water out of the ground, it doesn’t have those plastics in it. So whatever Nestle does, when they take it back to their bottling facility is what’s adding that plastic. You know, whether it’s intentional, I, I, I don’t think that would be intentional, but…

Mike Papantonio:             It’s just negligent. They don’t care. they’re going to save a little bit of money by not getting it out. So they save some money and consumers, again, become the victims. And so here’s the real, why. Why drink bottled water anyway?