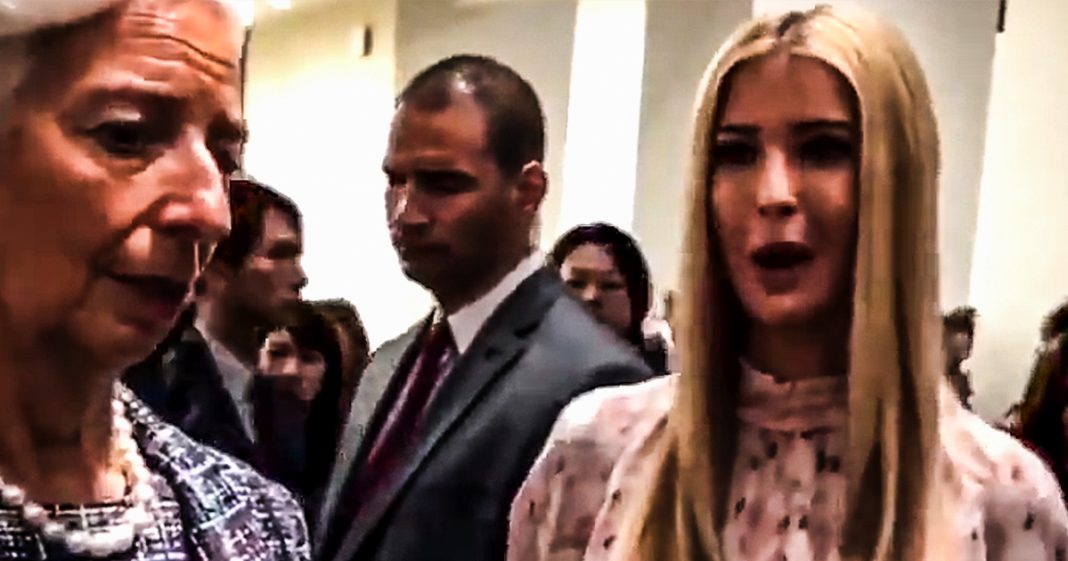 Over the weekend, the Trump administration appeared at the G20 Summit, and for some reason Ivanka Trump tagged along. Ivanka wasn’t content to sit on the sidelines, so she attempted to jump into a conversation with French President Emmanuel Macron, Canada’s Prime Minister Justin Trudeau and IMF chief Christine Lagarde, only to be completely ignored. The whole thing was captured on video, to help amplify her awkwardness. Ring of Fire’s Farron Cousins discusses this.

Well, the Trump administration, including Donald Trump’s daughter, Ivanka Trump was in Japan this past weekend for the G20 Summit. And Ivanka Trump struggled a little bit to, uh, I guess make friends or really to even make any kind of positive impression on any foreign leaders. Uh, viral clip has been going around showing Ivanka Trump trying to butt into a conversation and add her 2 cents. And, uh, as you could see from the following clip, it didn’t really go as well as she thought it would.

Now the a woman that you see that kind of, uh, looks at Ivanka like, why the hell are you here then Kind of, you know, does a little number and looks over this way. Again, that is IMF chief, uh, Christine Lagarde, who really had no regard whatsoever for what Ivanka was attempting to add to this conversation, which really wasn’t relevant to anything. Nobody in that little group of people that Ivanka was trying to butt into, cared at all what she had to say. Now they mostly attempted to, I guess, you know, be a little bit polite and just, yeah. Good, good point. Yeah. All right. Anyway, so back over here. But seriously, they all understand what most of us here in this country understand and that is that Ivanka Trump has nothing to add to any conversation ever, let alone any that involve massive political geo political or economic issues.

Ivanka Trump doesn’t understand them. Ivanka Trump had no place at the G20 Summit and that little 17 second video clip is proof of that she doesn’t belong. She has no qualifications to be there other than winning the genetic lottery in terms of which family tree she is on. I’m willing to bet she doesn’t like a lot of the genetics that she got from her father, but that’s a conversation for a different day. The point of the matter is that Ivanka Trump is in over her head. We have seen reports over the last few years showing that even members of the Trump administration itself have no idea why Ivanka is there. She doesn’t do anything. She’s not adding anything to any relevant conversation. She just kind of shows up and takes a seat at the table, and that’s happening here in the United States, and that’s bad enough. But when it starts happening overseas and these little clips like the one we just showed started going viral, and everyone on the planet can see what a laughingstock this woman truly is. Keep in mind they’re not just laughing at Ivanka, they’re laughing at the entire United States.