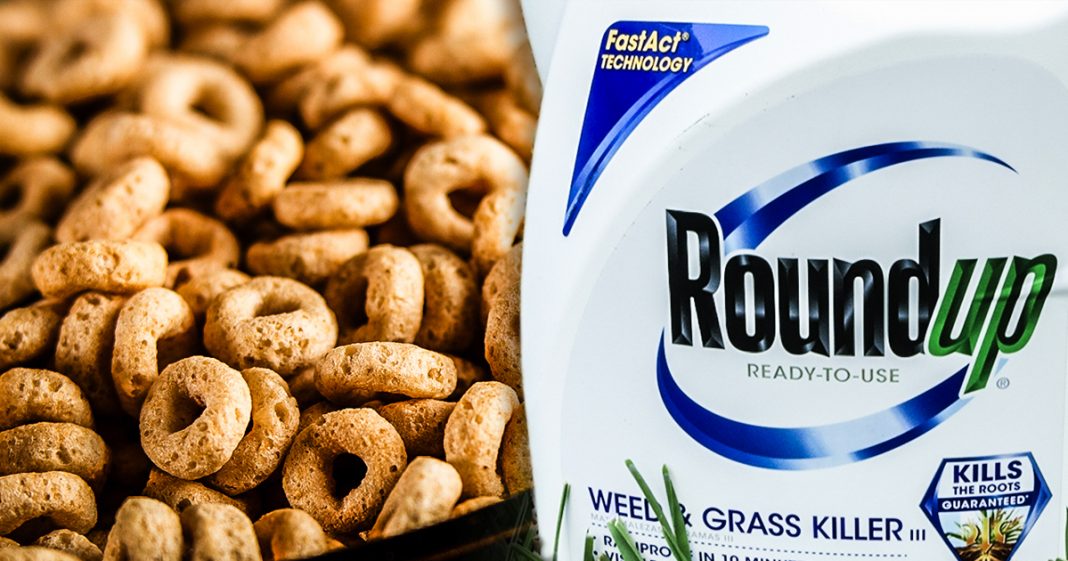 The Environmental Working Group has issued a new report showing that 20 of the most popular brands of cereal have been found to contain Monsanto’s Roundup weedkiller (glyphosate.) Independent studies have repeatedly shown that this chemical is absolutely toxic for the human body, and recently Monsanto has been losing in court while trying to argue that the chemical is safe. We are feeding this to our children every single day, and we have no idea what kind of damage is being done. Ring of Fire’s Farron Cousins discusses this.

The environmental working group has put out yet a another report based on a study that they commissioned showing us that some of the most popular cereal brands in the United States are packed full of the Beyer Monsanto toxin called glyphosate, which is the active ingredient in their weed killer Roundup. Recently over the last few months, there have been three different court cases in the state of California where the plaintiff has come in saying that exposure to Roundup glyphosate caused my cancer. And in all three of those cases when those arguments were made, when those lawyers went into court and showed the evidence, the jury sided with the plaintiff and against Beyer Monsanto, they have lost all three of the cases that have gone to trial because that jury was absolutely convinced based on the evidence that the glyphosate in Roundup manufactured by Monsanto caused these people’s cancer.

And now the environmental working group is warning us for the umpteenth time now that this toxin is in our food. Here is what the study found. The three highest concentrations of glyphosate were found in Honey Nut Cheerios, Medley Crunch Cheerios, toasted whole grain oats cereal. And Nature Valley crunchy granola bars in addition to 17 other popular cereal brands, mostly made by general mills, all packed full of glyphosate that may or may not cause Non-Hodgkin’s lymphoma. And I say may or may not cause, because if you look at all of the independent studies on it, it says, yes, it does cause this. But if you look at one’s funded by industry and people with a financial stake in this, they all say for some reason, no, no, it’s totally safe. Don’t worry about it. So in the F, uh, you know, uh, trying to come up with a little fairness here, going to present both sides, even though one side is backed by corporate funded science, while the other is backed by independent people who have nothing to gain from it.

I’m going to trust the people with nothing to gain. But here’s the issue, and this is something, again, we have discussed countless times on this program here. Glyphosate doesn’t wash off. It can’t be cooked out once it’s in the food, it’s in the food. So when you see these companies that are using GMO crops, you also have to understand that they’re are genetically modified to be able to withstand round up. That’s why GMOs exist in this country. We don’t need them to be adapted to special kinds of soil because of harsh conditions. That’s not what our GMOs are for. Our GMOs designed to accept buckets and buckets of Roundup on them that we now know according to the independent studies is definitely going to give you cancer. It might screw up your kidneys, your liver, your endocrine system, hormones could damage fetuses, all sorts of things and we’re dumping it by the bucket fall on all of our food and once it’s in there, it’s in there. That’s why we find it in, in the cereals found in the most popular beer and wine brands here in the United States. All because we’re so reliant on those GMOs, those Roundup ready crops is actually what they used to be called before we switched to GMO.

But we know what that means and Beyer and Monsanto are already paying the price for it in these court cases. Yes, they’re all going to be appealed, but the appeals likely not going to have much effect on this. Not to mention the fact that once these food companies understand that people aren’t going to be buying their products anymore because it’s packed full of glyphosate, they’re going to lose money. And so these food companies are also eventually, I can promise you going to have major lawsuits against Beyer Monsanto, the company better buckle up or better yet open up your checkbook because there are millions upon millions of Americans who have been exposed to your poison even if they’ve never stepped foot outside before because it’s in the food hell sometimes it’s in the water.

It’s in so many parts of our daily lives, even if we’ve done our best to avoid Roundup. So yeah, more law suits are on the way, and hopefully if there is any justice in this country, those are going to end the same way for Monsanto as those first three lawsuits have.