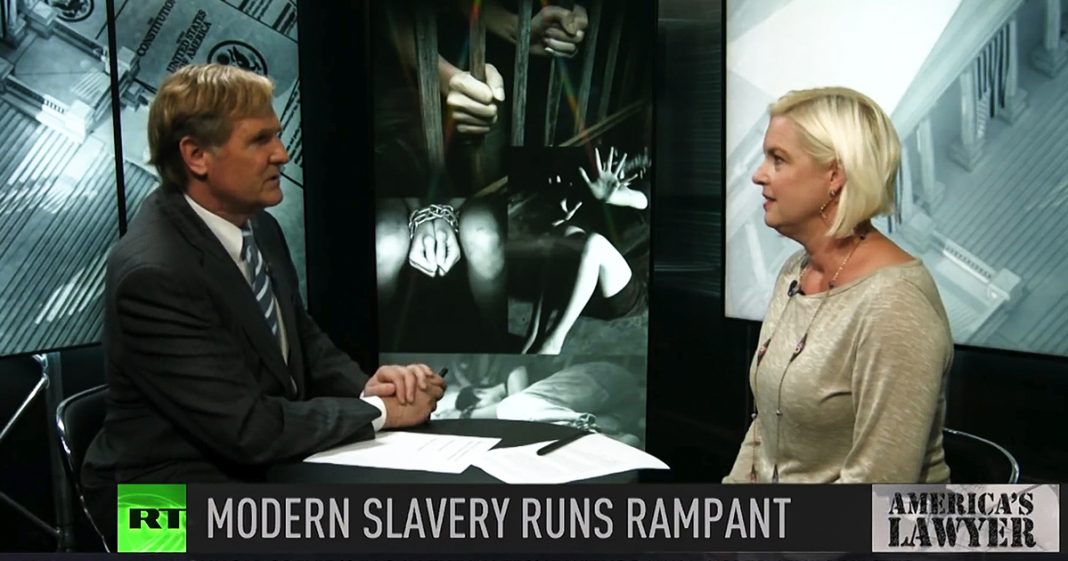 Via America’s Lawyer: Mike Papantonio is joined by legal journalist Mollye Barrows to discuss the gruesome reality of modern-day slavery and sex trafficking, which targets millions of women and children worldwide each year.

Mike Papantonio:             The reports are coming almost daily. Headlines showing how human trafficking is impacting people across the planet. In the United States, immigrants seeking, they’re looking for a better life. That’s really all they want. But it includes women and children and in the end they’re coerced and they’re sold into sex slavery. The most vulnerable around the world are being victimized.

Legal journalist Mollye Barrows is here with more to talk about this issue. Mollye, you know, we hear about human trafficking, we see movies like Taken and we think we understand everything about it where most people are so far off on understanding how bad this is. How widespread is this problem? This is a new industry, isn’t it?

Mollye Barrows:                It is global and it certainly to a great extent, it’s not new in the history of the world as far as governments and, you know, those that are in organized crime, taking advantage of people who are vulnerable. In these, this, these times you’re talking about populations that are, whether they’re migrants coming from North Africa, whether they’re women and children in North Korea, even migrants seeking a better life coming into this country.

They’re all being taken advantage of and it’s women and children that are predominantly the victims. And basically the way it works is, for instance, migrants trying to come into the United States will pay thousands of dollars to a smuggler. Sometimes their families sell everything they have and maybe the cost is $40,000.

So they sell everything they had to give them $10,000 with the idea that the person, once they get there, we’ll be able to contribute to this. And then once they’re there, they have no resources, no friends and family. They’re essentially isolated, don’t even speak the language. And then the smugglers take advantage and recoup their costs through sex slavery and forced labor.

Mike Papantonio:             Here’s what we’re seeing. As you know, we’re handling the, we’re handling some of the biggest human trafficking cases in the country. What we’re seeing is these companies being set up, and the company is set up to say, do you want to learn a job in the service industry? Might take place in the Ukraine. So these young women come in. Yeah, I would love to learn the service industry. They come to United States. So maybe they worked for a restaurant for the first week. The second week, the people who are bringing them in on H, H2B, H2A kind of visas.

Mike Papantonio:             That what they do is they say, well, you know, you’re probably not making enough money. Why don’t you dance at this strip club tonight and you’ll make some more money? And then that moves, why don’t you work at this massage parlor? And oh, by the way, you’re really attractive. Why don’t you become an es, an escort? So there’s all, but what’s the interesting thing is these companies are set up to do that and that you, they sell education. You can be better educated.

We can teach you how to be a member, how to work your way up through the industry, service industry. How would you like to be an AU pair? Why you want to be an AU pair? So they get to the United States under these special visas that the government provides. And then the government does nothing, nothing at all to follow up on whether or not this type of thing is taking place. It really is slavery in plain, in plain sight. That’s what it is. It’s slavery in plain sight.

Mollye Barrows:                And you’re exactly right and it’s happening in country after country. Over in North Korea, two and a half million victims, mostly women and children that are being sold into sex slavery into, in China. And in North Africa they’re leaving places like Libya and other countries to escape poverty and war torn countries. And again, they’re relying on these smugglers who are basically just organized criminals in disguise that are taking advantage of these and they’re exploiting them.

And they’re selling them and they’re selling them into forced labor. But most of the time it is children who are the biggest number of victims out of Africa alone. And then when you hear about it with everything, them being kidnapped and used in, in these wars, taught how to shoot guns. But for the most part, it’s these young girls that are being used in traffic and it is men who are the consumers.

It is men worldwide who are the customers. And it is, it is really just amazing that we have found through your firm the way to go after these people litigation wise, legally, to be able to expose how they’re profiting off this human tragedy.

Mike Papantonio:             Here’s, here’s what we’re seeing. It’s about a $50 billion a year business. The reason it’s such a big business is this is a reusable commodity. Okay? If you sell cocaine, you can only sell it one time.

Mike Papantonio:             But if you sell people, one case that we’re seeing is where truck stops all along, all through out the United States, they’re moving girls. The, a lot of Sudanese, a lot of Mexican, young ladies being moved, being moved from truck stop to truck stop all over the country. We’re seeing it in casinos, in places like Vegas where up on the 10th floor.

They’ll have a, an entire floor devoted towards keeping these women there for the high rollers. So this is slavery in plain sight and what we better be doing is we better if we, if we’re going to bring in somebody on a, on a H2B visa, there’s some responsibility to follow up and say, what happened to that person three weeks later?

Mike Papantonio:             No, they can’t. Unfortunately, they’ve got immunity. But all these corporations that are participating, that’s who we’re going after. Thanks for joining me, Mollye.