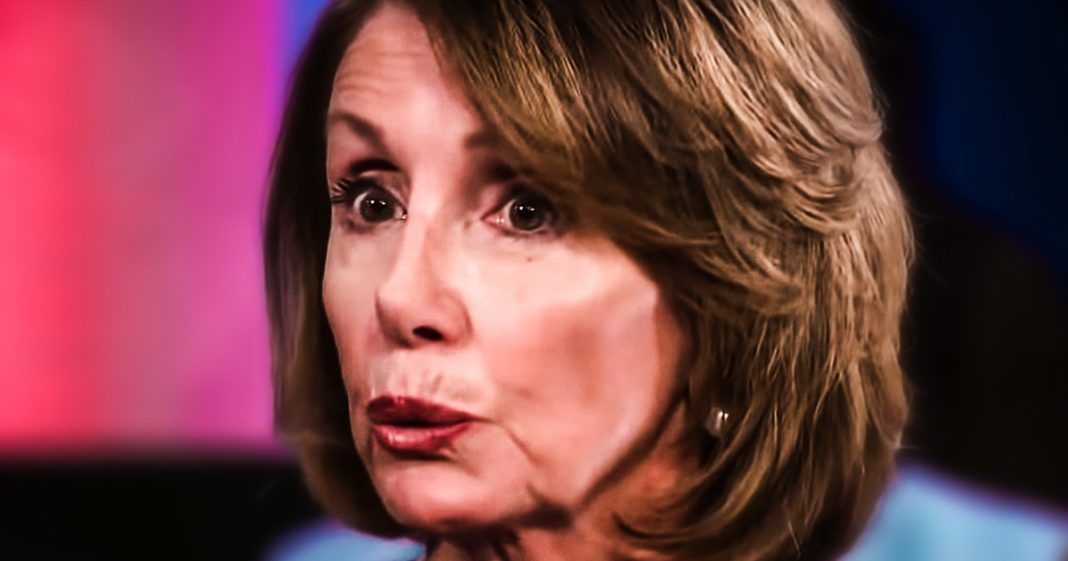 Nancy Pelosi is NOT having it. More than 70 Democratic members of the House of Representatives have called for the opening of an impeachment inquiry into Donald Trump, but Pelosi continues to stand in the way. What more is it going to take? There is plenty of evidence of criminal activity to at least open an inquiry, and with the threat of a looming war with Iran, what is she waiting for? Ring of Fire’s Farron Cousins discusses this.

As of now, there are more than 70 Democrats in the US House of Representatives who have called for the opening of an impeachment inquiry into Donald Trump. That represents almost one third of the total number of Democrats serving in the House of Representatives. And there’s one thing that stays in their way and that one thing happens to be the most powerful woman in Washington DC speaker of the house, Nancy Pelosi, third in line for the presidency. And Nancy Pelosi still is refusing to entertain the idea of opening and impeachment inquiry into Donald Trump. And for the life of me, still don’t know why. A lot of us still don’t know why. Oh, it’s because the Polls are nope, wrong. False. Yeah. Polls may show right this second. Majority of people don’t want him impeached, but the number that do want him impeached is rising every week. Not to mention the fact the majority didn’t want Nixon impeached, but we open that inquiry and suddenly, oh, everybody did want it, and then he had to resign before we could finish.

Things change. Things happen. This doesn’t even matter. Even at the polls didn’t change. It doesn’t matter. This is not about what the public likes are, what the public wants. You know, seriously for the love of God, the one friggin time that the Democratic Party is sitting there like, well, we should listen to the American public, but you’re not going to listen to us on Medicare For All or a Green New Deal or debt free college or raising the federal minimum wage or expanding social security. I can go on and on and on, but no, you’ll listen to them about the impeachment think because you care so deeply what the American public thinks. That’s horse shit, folks. Utter and absolute excrement coming out of a horse. That’s what this is. There is no reason Nancy Pelosi should not open that impeachment inquiry today. People want it. People need it. More importantly, this country needs it and it’s just an inquiry, right?

Really the start of an investigation, you don’t even have to go through with it, but Nancy says, oh, I’ll wait till I get Republicans on board. Keep waiting. You can wait a million years and you’re not going to get that. We know we’re not going to get a conviction in the senate, but that doesn’t mean that you can’t open this inquiry. Censure the president then refer that uh, evidence you get over for prosecution once he leaves office. Impeachments not the only thing to come from an impeachment inquiry. Folks, Nancy understands this. She, she knows the constitution, she knows the rules, she knows the rules of the house. She knows she could do that, but she also knows most people don’t know you can do that. So that’s what’s really interesting here. Look it up. It’s very interesting to find out what different avenues they have that really is not dependent 1% on any republicans. They can do it without them and they can make his life horrible because he’s made the presidency horrible between the obstruction of justice charges, between the banking issues, you know, bank fraud and all that. Wire fraud, possible tax fraud, the ignoring of subpoenas, the direction to ignore subpoenas. There is plenty of evidence already available right now to open this inquiry. We don’t need more evidence. I held the inauguration funds. There’s so many different things. So many, and ironically folks, none of them involve Russia. Not saying that that’s not a thing, but I am saying we didn’t even need that. We didn’t even need the Mueller report. Technically, we don’t even need the obstruction.

Got The campaign finance violations, the bank fraud, all sorts of different things to go on to get this man the emoluments for God’s sakes. The evidence is there. The information is there and it’s readily available for somebody like Nancy Pelosi to pick it up and say, you know what? Sorry, I jerked you folks around for so long. Buckle up because here we go. But unfortunately I do not believe for a second. Then Nancy Pelosi as the kind of leader that would actually show the real leadership that this country needs.