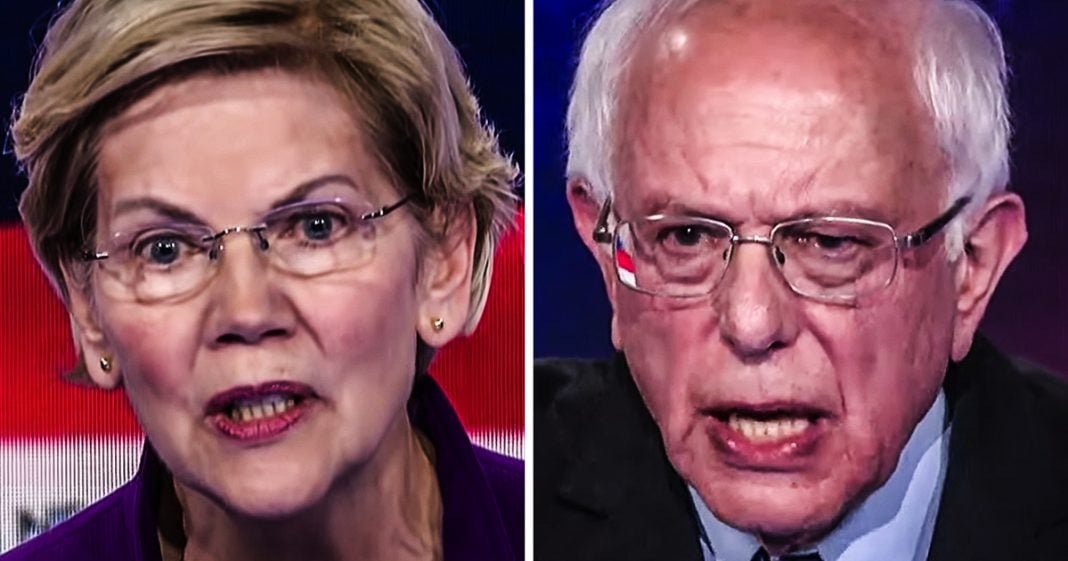 There’s a reason why Senators Bernie Sanders and Elizabeth Warren are having so much success on the campaign trail, and it is because they are the ones putting out the best policy proposals that actually address issues that Americans want fixed. They aren’t the ONLY candidates with plans, but they do appear to be the best-situated to make their ideas a reality. Meanwhile, candidates who offer nothing but platitudes and meaningless clichés are watching their poll numbers absolutely plummet. Ring of Fire’s Farron Cousins discusses this.

In the coming days, we’re going to see Democratic candidates for president dropping like flies. The first rounds of debates are over. We’ve seen who has risen to the top and who has fallen off the map. And again, we’re going to see a lot of campaigns end within the next few days here. But here’s what I liked so far about this entire process that really began in earnest this past January and it is the candidates who have nothing to offer but platitudes and you know, some cliched talking points, they’re not doing well. And that includes Joe Biden, Joe Biden, when he finally announced after a few months of teasing along with Beto O’Rourke who did the same thing. They didn’t have plans, they just had, well, let’s get back to normal. Oh, Republicans will start working with us once Trump has gone, oh, we need to come together as a country and love I. Those are great and wonderful messages, right?

You know, it’s perfect for a hallmark card, but unfortunately that’s not what the country is anymore. And the candidates who have consistently been rising in the polls with each and every passing pole are the ones who have been laying out policy after policy plan after plan with detail after detail. And there’s actually only two of them who fit that bill, who have not only been laying out constant policies, but have also consistently since the month of April been rising in every single poll. And those two people are Bernie Sanders and Elizabeth Warren. And I know I’ve mentioned that before about them rising in every poll, but that’s why it’s important because right now we can’t look at individual poll numbers and say, Oh, okay, this person’s going to get it. No. Instead you have to look at trends after all. Uh, here’s a little bit of history for you. On September 5th, 2015, Carly Fiorina was actually at the top of the Republican polls.

Carly Fiorina was winning in both Iowa and New Hampshire in Sept on September 5th, 2015 when those polls were released, they thought she was going to sweep those and then take it all. By September 30th of that same month, she had dropped down to either third or fourth place. And then of course as we all know, stumbled and never got back up. And the reason I point that out is because individual polls don’t mean anything this far out. Trends on the other hand who is consistently rising, that does matter and that means everything. And it’s not a coincidence that the only two people who are consistently rising instead of ups and downs and further downs and a little up and down is because they’re the two putting out the most detailed and elaborate policies to help American citizens. And I know there’s a lot of people on the left who are attacking Elizabeth Warren now, which I feel a lot of it is way out of line.

Yes, she has been wishy washy on Medicare for all and that is cause for concern. Even I, and not happy about that. Just as I’m not happy with Bernie Sanders vote to give the gun industry immunity from lawsuits, that’s a big black mark on his record. Neither of them are perfect, but they’re both leaps and bounds better than everybody else running for president on the democratic side, and I don’t buy into the weird argument that some on the left, they’re trying to make that Elizabeth Warren is somehow some kind of secret, secret corporatist establishment type. Literally nothing in the woman’s history that would suggest that she’s going to be a corporatist or somehow be soft on Wall Street. That’s insane. If you’re out there making that argument, you shouldn’t be allowed to make arguments anymore because it’s stupid. But back to my original point, which I have somehow veered way far off from their rising because they’re talking about issues.

They’re rising because they have plans and they have ideas. Hopefully when all of a sudden done, when we hit that 12th democratic debate, hopefully at that point there’s only two people left on the stage. Bernie Sanders and Elizabeth Warren, they both have some incredible strengths. They both have a couple of the weaknesses and yeah, I do agree. I think Elizabeth Warren has more weaknesses than Bernie. Bernie is the person to beat right now. And polls also show Bernie’s the person to beat Trump. So if you want to talk electability somebody with ideas and plans, somebody who actually attracts the young generation. Bernie checks all those boxes. Elizabeth Warren checks most of them, but no other candidates currently running. Even come close to checking as many of those boxes as both Bernie and Elizabeth Warren. And it’s because they’re out there talking about issues and not delivering stupid talk in the form of platitudes to try to make us all feel happy. That’s not what this election is about. And as long as Democrats focus on the issues beating Trump, he’s going to be a piece of cake. But you know which candidates to choose if you want to go the issue policy beating Trump route.