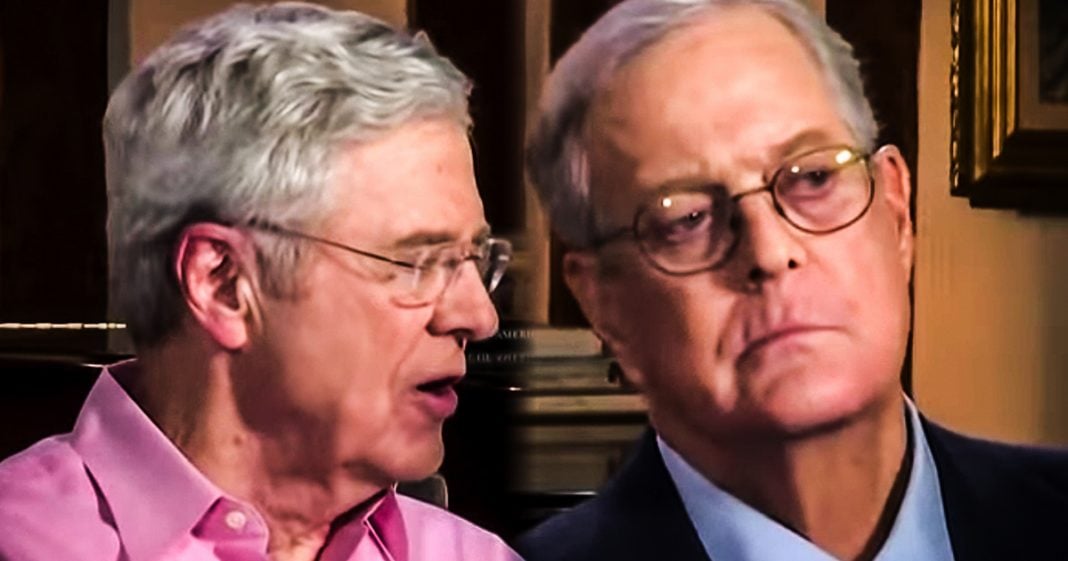 The Koch Brothers have signaled that they might not be comfortable with the current path that the Republican Party is on by opening up their wallets to centrist Democrats. Needless to say, the progressive wing of the Party isn’t happy with this, considering the disgusting history of the Kochs and the fact that they are only looking out for themselves. Ring of Fire’s Farron Cousins explains what’s happening and why we should all be concerned.

The Democratic Party itself as an organization along with the d triple c have made it clear that they’re a little uneasy about the parties, you know, move to the left, which is what the party actually needs to do if it wants to survive and win elections in the future. But they have suggested a unwillingness to really embrace truly progressive liberal policies instead favoring to take the more centrist route. You know, the little bit corporatist little bit Okay on social issues, we’re having a bit of an identity crisis type Democratic Party. One of the things that they’re doing, which we’ve discussed in the past, is that the d triple c does not want any progressive primary challengers to incumbents in 2020 which is why they’ve now come up with a rule that says, listen, if you hire or if any of our contractors work with any of the primary challengers, we’re going to blackball you and we’re never going to use your services again because we don’t want to upset the status quo.

Well, you know, who else doesn’t want to upset the status quo? The Koch brothers, and I’m not just bringing that up as some kind of mild, uh, you know, comparison here. The Koch brothers by way of Americans for prosperity announced just a few weeks ago that they’re open to the idea of starting to throw money behind some of the more centrist Democrats to protect them from progressive challengers. Now, when you find yourself on the same side as the Koch brothers on political issues and where candidates stand, if you’re on the same side as them, you probably screwed up somewhere in your life. That’s really the only way to describe what’s happening there. And yet, unfortunately, that’s where we see the Democratic Party today. You are now aligned with the Koch brothers because they’re looking at their own Republican party watching this beast implode. They don’t know what they want to do.

Hey, we’re not extreme horrible people like Donald Trump and the Mitch McConnell types. We just like corporations to have everything they want and we don’t care about poor people. Well, maybe the centrist Democrats fit that bill a little bit better than the Republican Party does today. That’s what the Koch brothers are telling themselves. That’s what Americans for prosperity is starting to embrace. They don’t want to be associated with the horrible hate coming out of the Republican Party because guess what, folks, believe it or not, most republicans are not hate filled individuals. They don’t see a problem with somebody just because of their sexuality or the color of their skin, or which God they choose to worship. They’re totally OK. With that kind of diversity, they just also want corporations to be able to poison. People don’t want to pay a living wage and think it’s perfectly okay for big banks to scam everybody.

They get their hands on still bad policy, but I guess not hate filled. And that’s why the Koch brothers are so attracted to these Democrats. Now the centrist corporate is Democrats who may in the future be getting this Koch brothers money. Now, Justice Democrats has come out and tried to defend some of the people that they are running in the primaries. You know, saying, we don’t have the millions of dollars that the Koch brothers have, nor would we ever want it. And to me, that statement right there is where every single Democrat should be. We don’t want your Koch money. You are destroying colleges throughout this country by giving them money, than injecting your style of government, your style of politics into economics classes. You know, saying you can’t teach all forms of economics once you focus more on the libertarian side, it’s actually happening in colleges across the country.

The Koch Brothers helped found the tea party with their funding. The tea party that yes gave us, people like Sarah Pailin and Michele Bachmann catapulted them to superstardom, dumbing down the Republican Party enough to pave the way for Donald Trump. Trump is the end result of the Koch brothers, by the way, and now they want to do the same thing to the Democratic Party. We’re done destroying Republicans. So let’s move on to the next logical target, which is the corporate centrist Democrats. Let me go ahead and spell this out. Very clear. If you’ve got a primary vote coming up and your state next year, and you’ve got a choice on a ballot between two different democrats, one of whom took in Koch money, the other of whom did not. That should be a no brainer as to which one of those candidates to vote for.