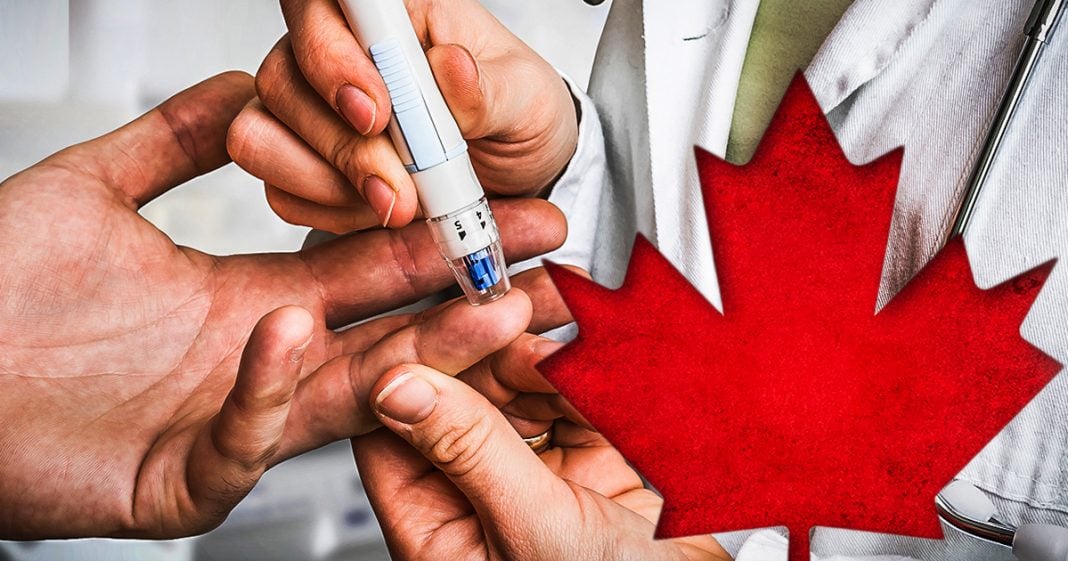 The price of prescription drugs and some medical procedures in the United States are reaching obscene levels, and the problem has gotten so bad that Americans are actually having to leave this country just to be able to afford medicines and care. Groups of people are traveling to Canada each month for cheaper prescription drugs, while droves are crossing the Mexican border each day for dental care. Ring of Fire’s Farron Cousins explains how the problem got so bad and what can be done about it.

About every six months. Donald Trump loves to warn us about a new caravan headed towards the United States. But you know what, there’s actually several different caravans happening on a regular basis that Donald Trump has not warning us about. And those are the caravans of American citizens traveling up to Canada to buy things like insulin because they can’t afford it if they were to buy it here in the United States. You know, a few weeks ago we talked about, uh, the first story when it first popped, a group of American citizens had to head up to Canada to buy insulin because they couldn’t afford it here in the United States because the price has skyrocketed so much. It’s more than doubled since the year 2012 more than doubled versus heading up to Canada to buy a vial, which is one 10th of the cost as it is here in the United States. So rather than not afford this life saving medication that they have to have, they’re packing up and heading to Canada, buying vials of this and coming back home and using it on themselves, using it for their diabetic children.

Or you know, any of the seven and a half million people in this country who have to take insulin for their diabetes. But that’s only part of the story. Another story we told you recently was the fact that you have American citizens along our southern border and even a little further north in that having to cross the border and go into Mexico in order to get dental care. In fact, there’s a couple of towns right along the border there in Mexico. We’re basically, every business is actually a dentist’s office because of the dental tourism that comes from the United States so they can get quality affordable care. So you’ve got tons of Americans heading south of the border to get quality, affordable healthcare and plenty heading north of our border to get quality affordable health care doc. The common thread here, people are having to leave the United States in order to be able to afford medicine and medical procedures.

And the irony there is that Republicans and conservatives have been telling us that if we enact some kind of Medicare for All plan and hell, they told us this, if we enacted Obamacare, it was going to happen. That doctors are going to leave the United States cause it wouldn’t be profitable anymore. Oh, it’s plenty profitable for them. Always has been. Always will be, but it’s actual regular Americans citizens who are having to leave the country to be able to afford care and in what is supposed to be the wealthiest country in the world, the most advanced country in the world. This is 100% unacceptable. It shouldn’t be happening, but it is because we have allowed the pharmaceutical companies, the insurance and the hospital corporations to do it.

Folks. That’s literally the only reason this is happening because we’ve just let them over the years, you know, the first few years of this, maybe it wasn’t so bad I they raised their prices a little bit and we’re okay, but then they start doing it every single year and suddenly this thing that we didn’t think we had to pay attention to as a federal government grew to proportions that now we have to have radical change just in order to fix it. Because if you think that any of these pharmaceutical companies are going to reduce the cost of their drugs to a 10th of what they currently are, which is again what they’re paying in Canada compared to the United States, you’re wrong. Radical, systemic, immediate change is the only thing that’s going to fix this problem. Health insurance companies, I’ve had far too long to fix the problems with their coverage. They failed. Hospital corporations continue to Jack up their prices for basic services, even though they know most people can’t afford them anymore, so they have failed and big Pharma’s the worst of all of them. Those issues have been talked about for years and years and years, and all they’re choosing to do is just raise prices even further because nobody can stop them technically. So they have failed. So radical systemic change is all that’s left, and I will not shed a single tear for any of these companies that watch their profits fall to a 10th of what they currently are, because they’re making all that money today by screwing over American citizens and allowing them to die because they can’t afford coverage. Okay.