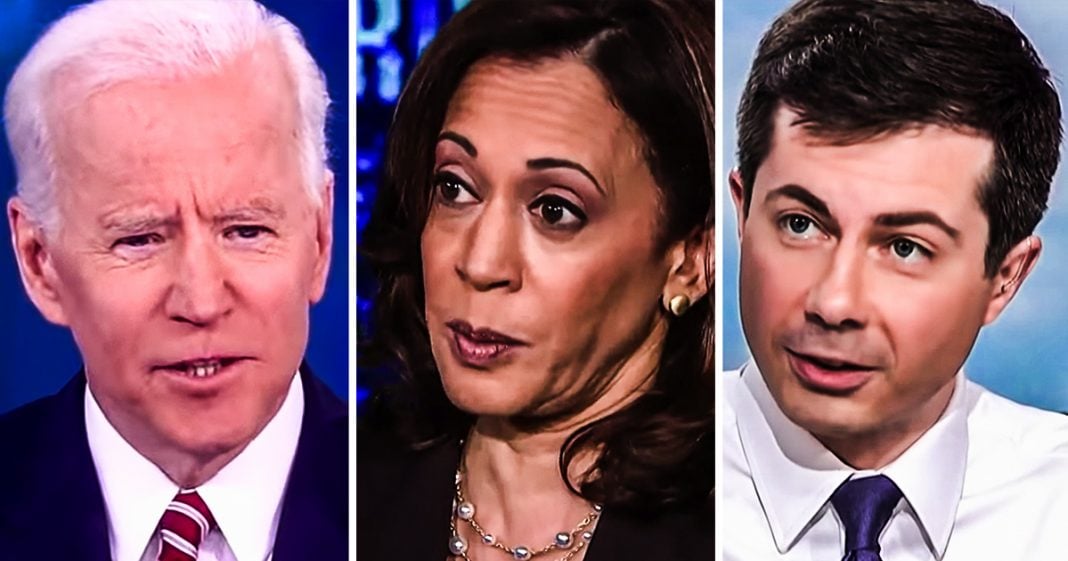 Wall Street bankers might be terrified of candidates like Bernie Sanders and Elizabeth Warren, but they are absolutely in love with people like Joe Biden, Kamala Harris, and Pete Buttigieg. According to recent reports, Wall Street insiders are “buzzing” about these candidates and believe that they would be the best ones for the Democrats to pick because they won’t disrupt their cash flow. This is something that should worry every single Democratic voter, as Ring of Fire’s Farron Cousins explains.

As we approach June 30th Democrats running for president understand that that is their filing deadline, so they got to get all the money in while they can before that June 30th filing deadline to show that, hey, I made a lot of money, I’ve got a lot of donors, I can win this whole thing. And so that is why in this last week and a half of June, we have seen nine different democrats hold nine different fundraisers up in New York, most of them with Wall Street executives and hedge fund managers and other people who really don’t want anything in this country to change. According to a recent report by The New York Times, Wall Street is buzzing. They say about three Democrats in particular, Joe Biden, Kamala Harris, if Pete Buttigieg, those are the three top candidates among Wall Street’s circles on the democratic side. Why? It’s pretty obvious they believe these three people are not going to endanger their way of life and their way of life is making as much money as possible.

Even if they end up screwing over consumers and they’re confident that either of these three people would not affect that or interfere with it in any way. And that alone should tell voters everything you need to know about these three individuals. And of course there’s a few out there who actually say Beto O’Rourke is their guy. Those are red flags folks. And endorsement by Wall Street is not something to be proud of groveling in front of these bankers who only care about how much money they can pack their bank accounts with is not an admirable thing to do. But that is what we have seen these Democrats do in the last week and a half. And some of them even longer than that. You know, a few months ago, in fact, I think it was back in January, politico reported that an anonymous banking executive when talking about the Democratic field and who the Democratic nominee would be said, quote, can’t be Warren and it can’t be Sanders.

Because those two individuals represent the greatest threat to Wall Street. And any candidate that poses a threat to Wall Street is a good candidate. In my book, and I Know Elizabeth Warren is kind of getting some crap right now. I understand the, the heat for her Medicare for all a non-stance, I guess you could call it, but she’s also said maybe I’ll take a, you know, pack money or corporate money, whatever it is in the general election. If I win the primary and they’re saying, Oh my God, Elizabeth Warren’s a sellout. Well listen, I wouldn’t be happy with her taking corporate money. However, there is literally nothing in her history that would suggest that money would corrupt her. Yes, she wants to raise money, but it’s probably going to be impossible from a lot of industries because they understand that she is not going to bend.

She is not going to break and she is not going to bow down to their demands. She’ll take their money. Maybe we’ll see and we’ll address that when and if it happens. Bernie Sanders. I don’t think we have anything to worry about there, but I do not think Elizabeth Warren is a corporate sellout, nor do I think Bernie Sanders is a corporate sellout. And that is why these Wall Street types are so afraid of them, because even if they attempted to throw money at these candidates, they know it’s not going to change a damn thing about the way they see the world and the problems that they want to fix. But these other folks, Biden, Harris, Buttigieg, O’Rourke, even Cory Booker is doing a fundraisers up there, they know that they can pay them off. And that’s the God’s honest truth. And that’s why they’re holding these fundraisers. That’s why they keep reaching out to them. Joe Biden told us explicitly by us, I mean he told bankers after he spoke about poverty, he then went and met with bankers for fundraiser and said, I’m not going to threaten your way of life. I’m not going to. I’m not going to threaten your profits at all. No, that’s not me. I’m Joe. You know me.

We know what these people are about now. And I hope more and more Democrats wake up and understand that a corporatist, centrist Democrat is not, not only not going to be Trump, but they’re not going to fix the problems that we have in this country. They will always, no matter how grand of a proposal they may have, they’re going to water it down and scale it back in order to appease the corporate interests, and I am obviously sitting here in a swing state. I’m a vote for whoever the Democratic nominee is, unless of course there is a viable third party candidate, then I might consider that. But if there isn’t, then yeah, I’m going to vote for the Democrat. Even if it’s Joe Biden, even if it’s common law Harris, which I actually think Harris would be better than Biden. I think Biden is one of the worst. But yeah, I’m going to vote Democrat folks because I understand that even when you have a a crappy Democrat, it’s still better than a a better than a horrid Republican. So that’s where I’m at. But there’s nothing wrong with criticizing some of these people today. I’ve had people ask me on Twitter recently like, oh, should you be saying this? Because what if this person gets the nomination?

Here’s the thing. I have my personal political leanings. I have my personal preferred candidates and I’ve made that abundantly clear. It’s Bernie and it’s Warren. I like them both. I’m happy if either of those people become president. Totally no problem with either of them, but I’m also not a cheerleader for any person, party, candidate, anything. That’s not my responsibility here. That shouldn’t be anybody’s responsibility. I praise Democrats because Democrats typically do more things correct than Republicans do. They, for the most part, protect consumers a hell of a lot more than Republicans do, but I’m also not afraid to go after Democrats, even if it’s a candidate who has the best shot at beating Donald Trump when they screw up, when they do something bad or wrong, I’m going to call them on it just like we do. Republicans just like all independent media should be doing.

We’re not cheer leaders, and if you are, then you miss the point of what you’re doing. I will continue to call out corporate as Democrats. I’ll praise them if they ever do anything good, which I have done. But right now we’re in a primary fight and we need the best candidate possible. So I will be talking about people’s flaws and I don’t think that’s going to sway a general election of Joe Biden becomes the candidate. So don’t, you know, come at me and say like, Oh, you can’t say this because what if they’re the candidate? Well, good. Then I will have spoken my piece. I will have educated people about where that person stands and we’ll see what happens in the general. I want to be Trump and I will do what it takes to make that happen, but I’m also not going to give anyone a pass just because I dislike someone else. That’s not my job. It shouldn’t be anybody’s job. Hold everyone accountable for what they say and what they do. That’s the bottom line.