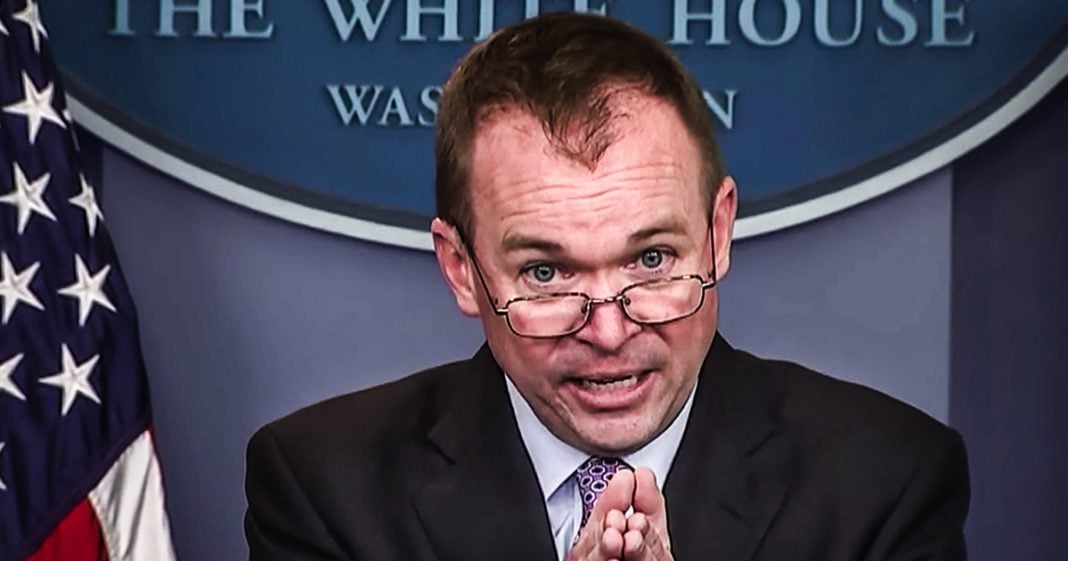 In a story that went virtually unnoticed, Mick Mulvaney took his efforts to gut the Consumer Financial Protection Bureau to the next level in early June by firing the ENTIRE 25-member advisory panel of the organization. This administration has absolutely no concern for American consumers, and they couldn’t care less if we get ripped off by banks and other companies. Ring of Fire’s Farron Cousins explains what’s happening.

One of my favorite things to do here at ring of fire is to talk about the stories that actually flew underneath the radar, not just the radar of the corporate media, but in many cases. Uh, the independent media as well sometimes misses a story and this happens to be one of those. On June 6th, Mick Mulvaney, the acting director of the consumer financial protection bureau, fired every single member of the 25 member advisory panel for the CFPB, fired every one of them. So as it stands right now for the last few weeks, and according to Mulvaney up until at least September, the CFPB is going to be operating without an advisory panel. What this 25 member advisory panel did in the past, before they were all fired by Mulvaney, was they were the ones who actually sat there, looked at the regulations and looked at the problems and determined what regulations needed to be put in place, whether some were too cumbersome or if everything was working the way it should.

Mulvaney who is now Trump’s chief of staff but still acting director of the CFPB as well, decided he doesn’t want anybody looking at the problems. He doesn’t want anybody out there protecting consumers because a lot of these members who were just fired were actually members of consumer rights organizations yet there were a few corporate people on there as well. But even though they weren’t saved from getting the acts on this issue and instead what Mulvaney says he’s going to do is maybe around September, it’s going to depend. I mean, obviously Trump’s chief of staff, he’s got a reelection, who knows if he’ll ever even get around to it, but maybe in September he tells us you’re going to hire new people, you know, to get more, you know, uh, stakeholders as he calls them involved in the process. Now I wonder what that can mean.

Stakeholders. I bet it’s probably pretty similar to shareholders. Mulvaney is going to stack the CFPB advisory board with corporate hacks who do not want any regulations in place and no Mulvaney has not come out and said that. But his actions have been saying that since he took over the CFPB, he sided with payday lenders over his own industry and argued in court via filing that his agency’s own regulations shouldn’t go into effect against payday lenders because they were just too burdensome. They were too broad. Oh my God, we, we shouldn’t reign in these people who create these endless cycles of debt for low income Americans. How horrible would that be for payday lenders? One of the most predatory industries in this country? So yeah, we know we’re Mulvaney stands on the issues and he stands 100% with corporations and against American consumers. Furthermore, Mulvaney his actions actually run counter to the law itself because as part of the Dodd frank bill, the CFPB has to have an advisory panel.

You can’t just get rid of it because you don’t want it there. It is literally a law that this thing has to exist. Mulvaney is an absolute cancer on the CFPB and he is destroying it from the inside. This is a cancer that has grown too big and too fast and it has to be removed. That is what Mulvaney is. But unfortunately, as long as Donald Trump is in the White House and in Les Mulvaney has committed an actual crime that we can convict him for, nothing is going to change. And hopefully in 2020 the American voters recognize that Trump is a horrible human being and an even worst president. And they were placing with somebody who’s going to put consumers first in this agency that was created to actually protect American consumers.