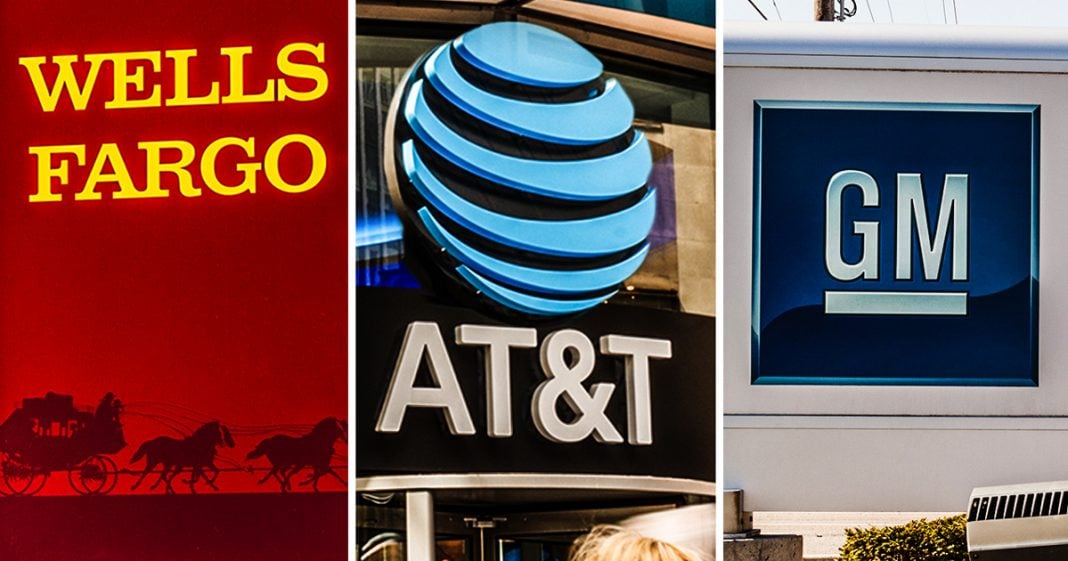 Companies like Wells Fargo, AT&T, and General Motors said that they were going to use the tax cut money from the Republicans to create new jobs, give workers raises, and update their facilities. Instead, they pocketed the money and began cutting jobs left and right. Workers are getting hit worse than ever and companies are being rewarded for it in the form of massive tax cuts. Ring of Fire’s Farron Cousins explains what’s happening.

To listen to Republicans talk. You would think that every single American citizen got some kind of massive windfall from the tax cut package that they passed at the end of 2017 but as it turns out in report after report, study after study, corporations did nothing but pocket all of that money. While fewer than 4% of American workers saw any kind of benefit what so ever. And recently in the Guardian, they pointed out three of the biggest offenders with regards to this tax cut. And these are three companies, AT&T, Wells Fargo, and General Motors who all swore up and down before this tax cut was passed, which they all supported. They said, listen, give us this tax cut. And what we’re going to do is we’re going to increase benefits. We’re going to create thousands of new jobs, we’re going to reinvest in our companies, we’re going to innovate, we’re going to build new headquarters.

We’re going to do all these wonderful things that we’ve been wanting to do. We just haven’t had the money to do it. So we want to take care of our workers. We want to give them raises and bonuses and benefits and vacation time, but darn it, we just don’t have the money. So please pass this. And that’s how it was sold to the American public. Now, most of us, even those on the right, understood. This isn’t going to happen. We knew it from day one because trickled down, never works in practice, but they use those lies to sell it to us anyway. And Lo and behold, here’s a new report showing, oops, none of that ever happened. So let’s get right into these three big offenders here, uh, AT&T to start with. They were one of the ones making the most lofty promises.

They specifically as a single company, promised us, I think about 7,000 new jobs. They said they were going to create new call centers throughout this country, creating new jobs and local areas here and there. But instead, what they’ve done is they pocketed 21 billion in the first year, and they’re going to be pocketing 3 billion a year after that. Um, they, uh, said they were going to invest 1 billion in capital expenditure. That never happened at all. Uh, they eliminated 23,000, 328 jobs since that tax cut bill was passed. So they’re not creating jobs. We didn’t get 7,000, we lost more than 23,000. Oh. And, uh, they gave their CEO a massive raise. That’s what they did with their tax cut package. General Motors, not much better. Um, they announced they were closing five plants since the tax cut. Bill pass, Michigan, Ohio, Maryland, uh, Ontario, 14,000 jobs, total loss from that.

Uh, they’ve spent 10 billion in stock buy backs. AT&T is also spent billions in stock buybacks and, uh, they got 157 million from the tax cuts just in the first three months of 2008. Teen Wells Fargo actually did keep one of their promises and that promise was to pay everybody in their company a $15 minimum wage. So good for you, Wells Fargo. But then you immediately screwed up by doing this because your company is going to save, according to this report, three point $7 billion every single year. Um, you’re not investing in your workforce. A Wells Fargo is brought back, uh, bought back 350 million shares of their own stock, uh, worth about 22.6 billion. They increased their CEO salary by 36%, and they announced plans in September to eliminate at least 26,000 jobs in the US over the next three years. So it’s great that you’re now paying people $15 an hour at a minimum, but you’re also going to be cutting 26,000 jobs, which is actually going to have a bigger ego, economic impact.

Then finally paying people living wage. These three companies may be the worst offenders out there, but there are certainly not solitary actors. This is what happened with this tax cut. Only 4% of workers in this country saw any kind of benefit whatsoever. The rest of it went right back into the pockets of the wealthy elite. And I don’t know how many more studies and reports have to come out telling us that before Republican’s are finally willing to admit that, you know what? Yeah, this only helped the rich people and that’s because that’s how we designed it. My guess is that no matter how many studies we get, they will never admit that this was their intention and that this is actually what it’s doing.