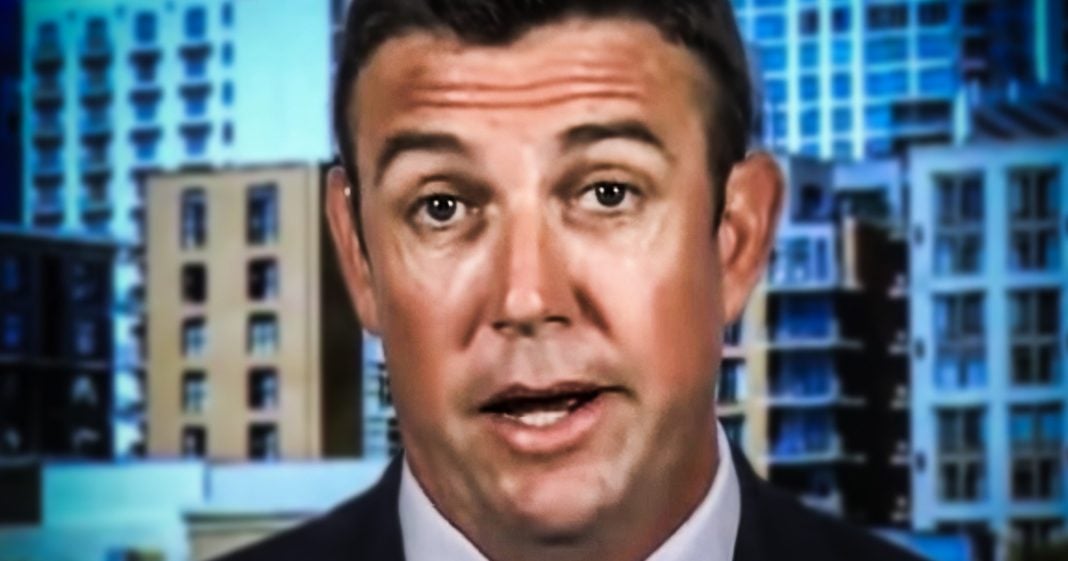 Republican Representative Duncan Hunter is still awaiting trial for allegedly misusing campaign funds, but his trial might just be for show at this point. His wife, Margaret Hunter, has already accepted a plea deal and admitted that both she and her husband used his election campaign funds for personal expenses. Her expenses were illegal, though seemingly for a good cause, but Duncan’s alleged misuse of funds might have involved paying off mistresses. Ring of Fire’s Farron Cousins explains why Duncan Hunter should be in jail instead of serving in Congress.

Republican Representative Duncan Hunter has been a supporter of Donald Trump and outspoken critic of Democrats and after September possibly even a felon. Here’s the story of Duncan Hunter. Just a couple of weeks ago, his wife Margaret Hunter accepted a plea deal with prosecutors and here is a statement from Mrs. Hunter’s plea agreement. This understanding allow the Hunters to spend campaign funds on certain personal matters they wished to conceal from the other. For example, defendant (Margaret Hunter) hid from Hunter (Duncan). Certain purchases she made with campaign funds are items like children’s school lunches. At the same time, Hunter concealed from defendant his use of campaign funds to facilitate certain personal relationships with others.

That is from the June 12th plea agreement of Margaret Hunter, the wife of Republican Representative Duncan Hunter. And the reason I bring this up is because yes for quite some time, Duncan Hunter was under investigation for misuse of campaign funds, which is 100% illegal. He is awaiting trial that is set to begin on September 10th and he has still a sitting member of the US House of Representatives actually won reelection just last year.

Don’t get Hunter by his wife’s own admission, should be in jail, not serving in the US House of Representatives and trust me, by the time this is all over, Duncan Hunter will be sitting in a jail cell instead of in Congress, but it should have happened now. And the reason his wife has agreed to this plea deal, which includes her turning over every possible document that she has about it is because initially when this story broke, Duncan tried to throw her under the bus. Here’s what he had to say back then. He said, when I went away to Iraq in 2003 the first time I gave Margaret Power of attorney, she handled my finances throughout my entire military career. And that continued on. When I got into Congress, she was also the campaign manager. So whatever she did, that’ll be looked at too, I’m sure. But I didn’t do it.

That’s what Duncan Hunter said. He said, look, whoa. She was running all of it. You know, I’m sure whatever she did, do you need to look into that? But I didn’t. I wasn’t involved in any of that. And now his wife comes out and says, yeah, you wore bud. We did this together. It takes two to have a conspiracy here. Right. And I was paying for things like the kids’ lunches at school. You were paying to cover up your affairs. Yeah. Things aren’t exactly hunky dory in the a Hunter household, but it’s not just paying for school. Lunches are covering up affairs. Oh No. This list goes on and on and on. And here it is. Uh, Margaret and Duncan charged his campaign $2,500 for a personal trip to Las Vegas. Uh, they spent a few hundred campaign dollars at the Del Mar race track on a date night. Uh, they took the family, uh, to the hotel Del Coronado to celebrate one of their children’s birthdays on the campaign tab.

Uh, they charged the campaign for a trip they took with their three kids and a relative to Washington DC for a family vacation. Uh, they had a family dinner that was mischaracterized and campaign finance reports as dinners with volunteers. They had a dinner with friends at the montage, Laguna beach resort with room service, drinks and meals. Dishonesty described as they can’t pay an event. They had a family vacation yet again to Washington with charges for zip lining. March, 2015 Hunter told Margaret he needs to do uh, by Hawaii shorts and she suggested, uh, that he report the purchase as quote some golf balls for wounded warriors. July the campaign credit card was declined in Los Vegas when the Hunters and the words of Margaret racked up a $600 mini bar charge at Caesar’s palace and charge it for that trip. Also include a $200 family breakfast and an undisclosed amount for kids’ room service.

That same November, the family took a $10,000 trip to Italy and during that time, Duncan Hunter actually tried to arrange to go visit a, a navy base, but they said, yeah, we can’t do it that time. How about the southern one didn’t coincide with Duncan Hunter’s trips, so he told them according to Margaret’s plea deal to go expletive yourself navy. I could continue, but what’s the point, Right? Duncan Hunter by his wife’s own admission is a criminal and come September once this trial begins, which is actually going to be before Margaret’s sentencing, which she could get up to five years in jail. Duncan Hunter will be, I promise you, a convicted criminal at that point, and this is a man who is openly embraced by the Republican Party, and this is the kind of shenanigans he pulled with the money that people donated to his political campaigns.