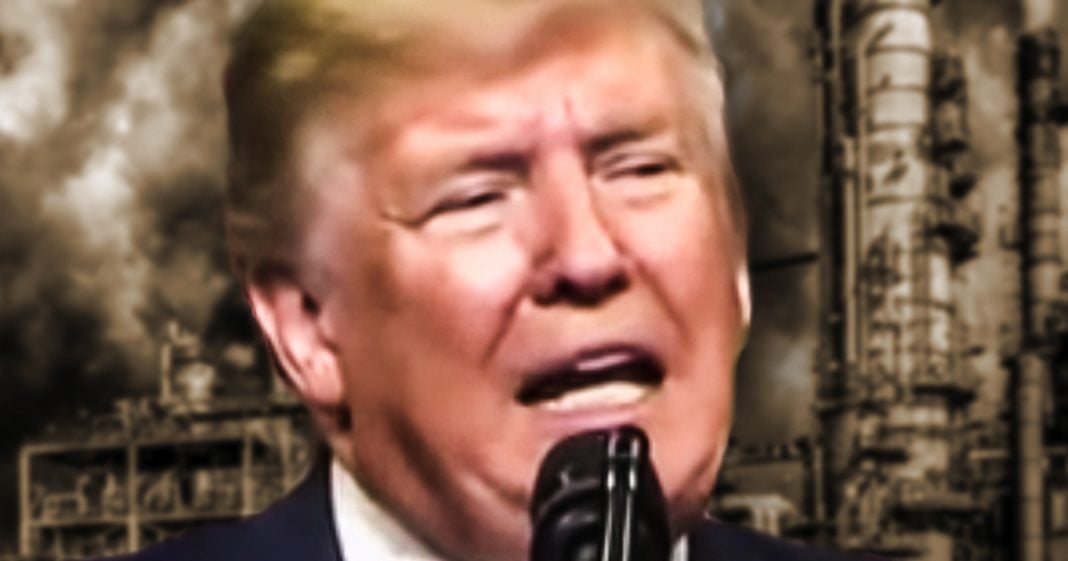 Donald Trump wants to take America back in time with his policies, and nowhere is this more clear than his administration’s attempts to revive the dying coal industry. These form of energy has been used for more than 2 centuries, but this administration believes that it has to be a part of our energy future, even though scientists keep telling us we have to move on. Ring of Fire’s Farron Cousins explains what’s happening.

One of the most interesting things we’ve seen from both Donald Trump and the republican party as a whole is that they don’t like progress here in the United States. They’re really not too fond of technological advancements of any kind of industrial advancements. They don’t like those kinds of things. And we know that because of their policies recently, the Trump administration finalized their rule within the EPA. Uh, they’re affordable clean energy rule, the ace rule, which is actually going to repeal and replace Obama’s clean power rule, which would have a reduced emissions dramatically by 32% by the year 2030. And it was also estimated to save between 2,700 – 7,000 lives, that single policy by the Obama administration.

But the Trump administration’s new rule, this ace rule says that, you know what, we’re not going to decrease emissions are EPA is telling us that this is going to result in an extra 1400 premature deaths every single year. But we’re going to push forward with it. And what it’s going to do is it’s going to put the power outside of the US EPA and give the power to regulate coal plants in emissions back to the states. You know, because states are fully funded and well equipped to do those kinds of things. That is one of the most idiotic Republican ideas out there. And it’s not just with this issue. Republicans always say, let the states decide. Most states are starved for cash. You Idiots, they can’t even afford to do the things they already have on their plate, let alone also become massive protectors of the environment. But that’s what Republicans think. Now the reason this policy is taking us backwards in time is because it’s going to essentially help bail out coal companies.

You know, the industry that is effectively dying. We have had more coal companies closed their doors in, uh, in Trump’s first two and a half years than we did for the entire first term of Barack Obama. Why? Because renewable energy is becoming more reliable. It is becoming more efficient. Battery capacity has increased, costs have gone down. Meanwhile, global demand for coal is plummeting. Yet this administration and the Republican Party as a whole continue to tell us that we have to burn these rocks that we dig out of the ground, even though it kills people when we do it, we have to keep burning up. Yeah, we’ve been burning them for a few hundred years and there’s better alternatives, cleaner alternatives, cheaper alternatives, but we just like burning rocks.

That’s what we do here in the United States. We just burn it all. To hell with the consequences because let’s face it, most of the Republican leaders in DC today are going to be dead before the worst consequences of climate change show up. So what do they care? Right? You don’t care about their children or their grandchildren or future generations. It’s all about them. And that’s why Trump is trying to take us backwards on this policy. Do you think he gives a damn if baron breeds clean air when he gets older, I guarantee you he couldn’t even tell you off the top of his head when Barron’s birthday is, let alone whether or not the kid gets to drink clean water or breathe clean air. Because Trump only cares about what he can do to help his personal career family be damned. And that is exactly what his administration is doing with this new ace rule to coddle coal companies and stifle clean energy production.