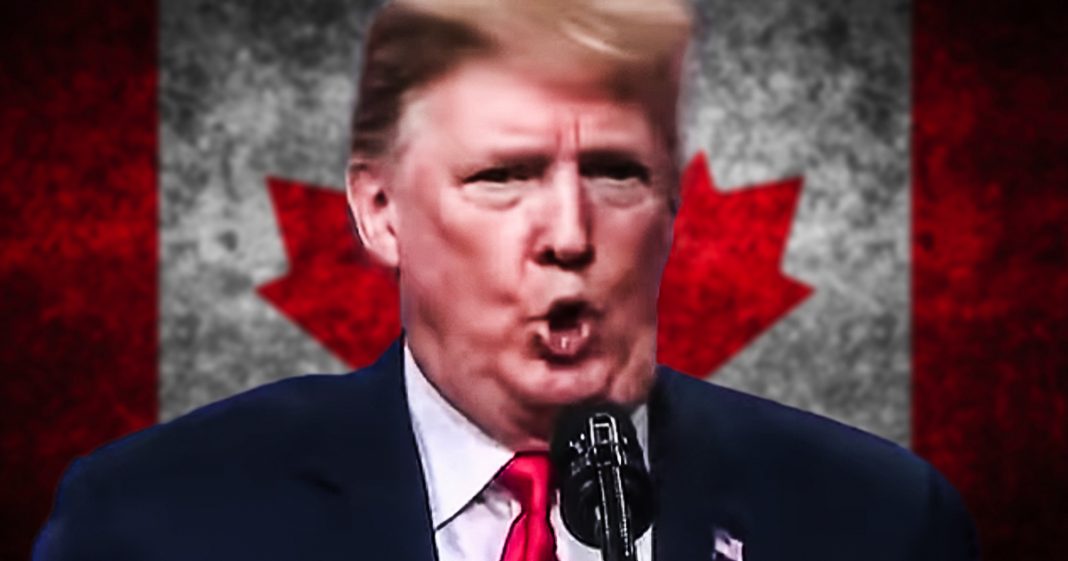 Donald Trump’s trade war is driving some of our most reliable trading partners to go elsewhere, and Canada is welcoming these new partners with open arms. Canada is actively working on courting more importers and exporters who are hoping to avoid the volatility of Donald Trump, and so far it appears to be working. Trump is costing us a lot of money, in addition to possibly throwing off our trade standing for generations. Ring of Fire’s Farron Cousins discusses this.

Businesses and consumers here in the United States are still feeling the effects of Donald Trump’s trade war with China, a trade war that really does not have any end in sight right now. Everybody’s just kind of praying that Donald Trump isn’t going to make it worse, but we all know that eventually Donald Trump is going to make it worse. But do you know who is not reeling from the effects of this? In fact, you know who’s actually kind of cashing in on this, besides obviously the US treasury, Canada.

Canada’s loving this. Do you know why? Because now that the United States as being such a whiny little country about trade and imposing tariffs and threatening tariffs, we have a president who can tweet out a single stupid thing and crashed the stock market. And businesses still have businesses to run. They have trade partners that they have to keep trading with. And Canada’s trying to step in right now and say, hey, United States is pretty volatile. You don’t know what’s going to happen one day to the next. And it’s all because of that Donald Trump guy. So instead of buying X, Y, or Z from the United States, how about you come to us, come to Canada by our stuff, we’re not going to put tariffs on.

You were also a bunch of really nice people up here, right, and it’s working according to a new report in Politico, Canada is reaching out, finding all kinds of new trade partners who are really just sick of the crap coming from the United States. That’s what this boils down to because some of their new trade partners and the people that are reaching out to, they’re not even affected by the tariffs, but they are affected in ways by the United States stock market, by the Dow Jones, by all of that, by the value of the dollar rising and falling, and Donald Trump threatens all of that.

Donald Trump represents instability for the United States economy, and this is according to these other countries and businesses and they want to avoid it by any means possible. So they’re going elsewhere. You have some people here in the United States move in their factories. Part of it’s because they don’t like to pay a living wage or because they, you know, don’t want to be taxed at all. But part of it’s also because they understand that their business is threatened here in the United States because of Donald Trump and Canada is now starting to reach out to these people with open arms saying, come up here. Things aren’t as insane up here. They’re not perfect by any stretch of the imagination, but hey, at least we don’t have Donald Trump. So the question at this point is going to become how much longer are Republican voters going to put up with this crap?

It’s not just Donald Trump’s policies that other countries are getting worried about. It’s his fricking personality because he can, honest to God, we’ve seen it happen plenty of times. He can send out a tweet that ends up taking the stock. Is that the kind of economy you want to have here in the United States? That when the president throws a temper Tantrum, millions of people start losing lots of money for no other reason than he got pissed off watching Fox News. But that’s what we’re living in right now. We’re losing tons of money because of it, and other countries like Canada are really starting to cash in on just how stupid the man is who happens to be running the United States right now.