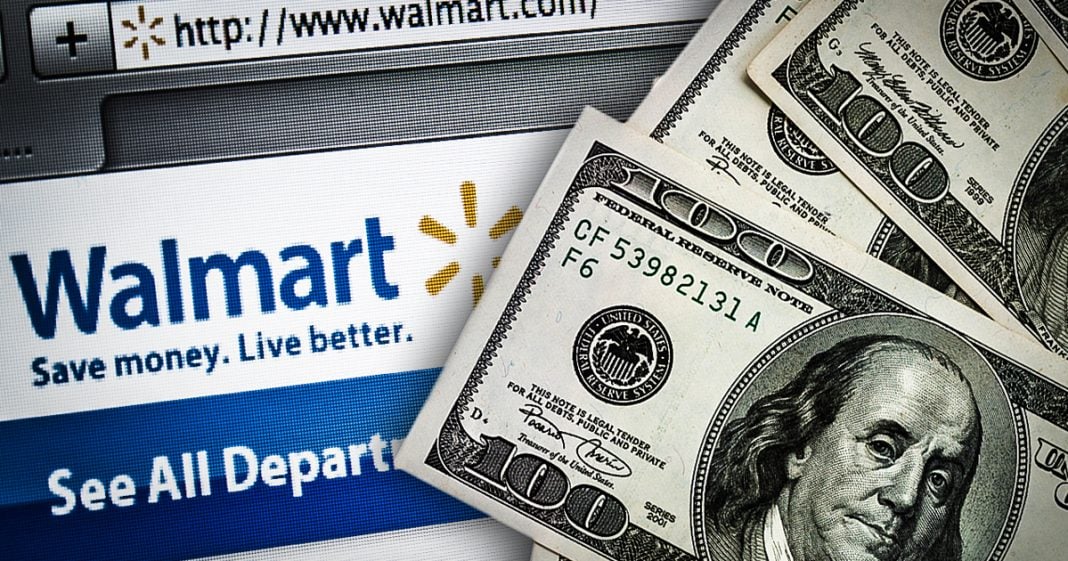 Walmart recently announced that they would be closing one of their business offices and laying off close to 600 employees. This comes at the same time that the company received a $2.2 billion tax cut courtesy of the Republican tax scam. This is happening with companies all over the country – they are taking the money and running. Ring of Fire’s Farron Cousins discusses this.

Last week, Walmart announced that they would be closing one of their headquarters near the Charlotte North Carolina airport and laying off hundreds of workers starting this coming September and going through into next year. Now, corporations closed the doors all the time. They lay people off constantly. So why is this such a big deal? Well, maybe it has something to do with the fact that Walmart pocketed two point $2 billion from the Republican tax scam, and now contrary to their promise, they’re laying off even more workers than they already had, since they’ve gotten the tax break so far, thousands of Walmart and Sam’s Club employees both owned by the same company, obviously, uh, have been laid off since they got these tax cuts. They’ve pocketed two point $2 billion, and in the early days of the tax cut, they gave out a couple thousand dollar bonuses to certain employees who fit a certain subset of criteria that was damn near impossible to reach.

And then at the time when they gave out those thousand dollar bonuses, Donald Trump actually praise them on Twitter. And he said, see, this is great news. As a result of our tax cuts and jobs act, trying to point to Walmart as the a, you know, standard of what corporations should be in the United States. Well, I guess other companies took this to heart because everybody seems to be following the same playbook right now. And it is worth mentioning that, uh, that tweet Trump sent out came just a few hours before the company announced they were closing the 63 Sam’s club stores and laying off thousands of workers hours apart. Those announcements. But again, it’s not just Walmart, they’re not the only ones to, you know, pocketing the money and running off with it. You have other corporations who’ve done the same thing. Qualcomm, a tech giant here in the United States, uh, spent $10 billion of their tax break buying back their own stock and then they laid off 1500 people, Kimberly Clark, popular makers of things such as Kleenex and Huggies.

They laid off 5,500 people, which is basically 13% of their entire workforce after pocketing huge sums from the tax cuts at t and t is one of them was, well, countless companies in this country who had actually promised, they told us they were going to hire more workers, invest in their companies, give everybody bonuses and raises. Everyone’s going to be holding hands and living in a utopia because of these tax cuts. Never happened. It never happened. Most of us knew it was never going to happen, but Republicans continue to sell us on that lie. This story along with the Qualcomm in the Kimberly Clark story in the eight t and t story and the story of every other company who’s doing this needs to be front and center on the campaign trail for the Democrats. Part of the reason is because most of these areas, not all, but most of these areas where these factories are closing down, the headquarters are closing down.

Yeah. These are red areas on the map. These are Republican areas and they’re the ones getting screwed over by the very people they put into power in DC, and Democrats need to go and hammer that issue home to them. I know they know that they got laid off. That’s not part of the issue, but they need to be reminded of who lied them into this situation. Corporations can’t do this on their own, and they had a ton of help from the Republican party because after all, they could’ve just laid all these people off and walked away. But instead they pocketed billions upon billions of dollars prior to laying these people off. Those are our tax dollars that they’re pocketing. They’re starving our schools, they’re starving or infrastructure. They’re starving social safety net programs, and they’re doing it at the expense of the American worker.