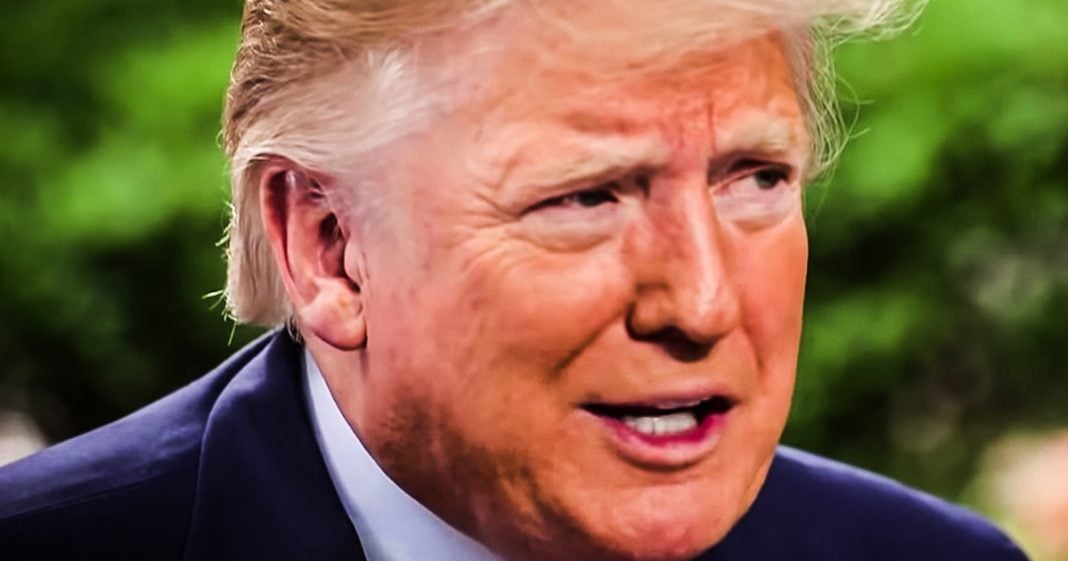 A new Monmouth Poll shows Donald Trump’s approval rating at just 41%. Add that into the aggregate polling data and Trump becomes the first president EVER to never hit the 50% mark. The President has never been able to get half of the people in the country to approve of him, and that is likely to remain the case for the rest of his tenure. Ring of Fire’s Farron Cousins discusses this.

Donald Trump has admitted that polls who’ve never really been his strong suit, but he still maintains that if the media wasn’t talking about all the horrible, crappy does on a daily basis, his approval rating would be absolutely through the roof so high that most of his supporters couldn’t even count to it. But unfortunately for Donald Trump, we live in the real world and the real world poll show that Donald Trump is currently polling at roughly 41% or at least that’s the result of the new Monmouth poll that came out at the end of last week. But here’s what’s interesting about this particular poll is not that it shows him at 41% but that once you also add that into the aggregate polling data, you realize that Donald Trump is the only president in the history of presidential polling to have never, hit 50% or higher in their approval rating since this man was sworn in as president. The aggregate of the Poles has never shown him to have even at least half the support of this country.

And no other president in history. The history of polling, I should say, has ever been that unpopular. So Donald Trump likes to be recognized for his achievements, and this is a pretty big achievement. No sitting president in the history of polling has ever been as unpopular as he has here in the United States of America. That is a mantle, a prize and a title that he will likely never get rid of. But that’s who this man is. And I know he wants to blame the media for his low poll numbers, but the truth is he has nobody to blame but himself. And therein lies. The problem with Donald Trump, you see, he is the kind of person, and I’m sure we all know people like this that want to blame everybody else for their own problems, their own misgivings, their own misfortunes. It’s never their fault. It’s never the result of their actions. You know, Oh, I did a stupid thing, but it’s not my fault that I’m dealing with the consequences. Maybe it’s the person who caught me doing the stupid thing. Maybe it’s because nobody wanted to do the stupid thing with me, so they’re to blame.

It’s you, Okay. You’re the problem. You’re to blame. The fault is your own. The reason Donald Trump’s poll numbers suck right now and have historically always sucked his because he sucks. That what that means. It’s not because the media is out there telling lies about you. It’s because you’re out there telling lies about literally everything more than 10,000 lies. And just two and a half years in this man has told, and the public understands that a majority of Republicans even say, you know what? This guy embarrasses me. I’m concerned about the things that he says. I still support him, but I’m embarrassed. There’s a difference between support and approval.

And Donald Trump needs to understand that just because these people agree like, yeah, okay, I’ll vote for you again. It doesn’t mean they approve of who you are as a person or really even have the job you’re doing. We are very tribal here in the United States, especially when it comes to politics. It’s like a football team or a baseball team. We pick our side, we stick with you through thick or thin and we’re not going to leave yet. That’s how a lot of people are with politics. You know, either you’re a Democrat or Republican or one of the other ones, we need more of the other ones, they need to have a bigger voice in a bigger say, but right now they don’t. And the two tree teams are basically tribes, but just because of that doesn’t mean that we always approve of the job of our person. And Trump needs to understand that just because he has an 80% 90% approval among Republicans doesn’t mean that the public as a whole actually approves of the job that he’s doing, or that his poll numbers would be higher if the media just weren’t so, gosh darn mean to them all the time.