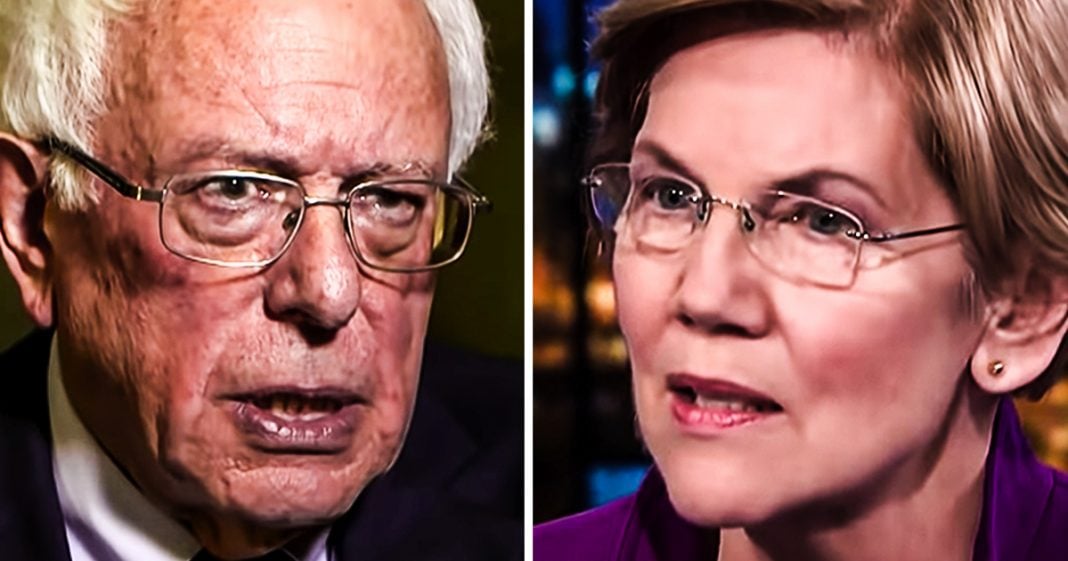 The corporate media is doing a wonderful job of lying about Bernie Sanders, especially when it comes to his take on Elizabeth Warren. Sanders has always spoken highly of Warren, and vice versa, but the media wants to see these two rip each other apart and they have no problem spreading vicious lies to get the fight going. Ring of Fire’s Farron Cousins explains what’s happening.

Towards the end of last week. An article for Vanity Fair came out written by Bess Levin, and Bess Levin titled the article as follows, or at least Vanity Fair did, Sanders: Warren Is Surging Because She’s Got Ovaries.” Now, everybody who saw this headline, myself included the first time before I clicked on it, assumed obviously that that is what Bernie Sanders said because that headline is written as a quote because it says Bernie Sanders COLON Warren Is Surging Because She’s Got Ovaries. That’s how you write something in a headline if you’re quoting somebody. That is a misleading headline and that’s not even close to what Bernie Sanders had to say. In fact, the article has his exact quote and what they’re talking about as an appearance that Bernie Sanders made last Wednesday on CNN’s Chris Cuomo show, and here’s the exact quote because he was asked by Cuomo, “What do you think the reason is that Elizabeth Warren is catching up to you in the polls?” Do you believe that people see her as the more electable version of Bernie Sanders? And here is what Bernie Sanders responded with.

Now maybe you have to replay that part that I just said or maybe you can just follow the link in the description to read it for yourself, but nowhere in there did I see him say, “Because she’s got ovaries,” but that’s what the headline says. That’s what that article was called, that this would have made it seem. It sound like he said that because she’s got ovaries. She’s winning. She’s beating him now. And that’s not even close to what’s happening. But I’ll tell you what is happening and we’re seeing this not just in vanity fair, but another papers popping up all over the place.

Websites, online stories, people on Twitter, they’re trying to start this fight between Bernie Sanders and Elizabeth Warren. Why? Well, the prevailing theory is at the establishment types want to see these two progressive’s rip each other apart and tear each other down so that a more centrist Democrat can emerge as the candidate. I think there’s some merit to that theory, but mostly I think it’s because there is still this deep seated hatred among the establishment types for Bernie Sanders. This is a disgusting and misleading headline, and maybe by the time you’re watching this may be vanity fair has issued an apology and a retraction and corrected it. But as I sit here right now, they haven’t.

They haven’t acknowledged that they screwed up and that they lied. And this is coming from a long time. Vanity Fair reader that always seems to love their articles. This is sloppy, this is gross, and this needs to be retracted. But what they’re trying to do is even worse than a sloppy headline and a misquote. Bernie Sanders is not attacking Elizabeth Warren because she’s a woman. In fact, he’s not even living the attacks on her that the media claims that he is because just a day or two prior to that, right? We all remember, he uh, tweeted out the cat’s out of the bag, the corporate wing of the Democratic Party’s publicly anybody but Bernie, they know our progressive agenda of, of Medicare for all breaking up the bags, taking on drug companies and raising wages is the real threat to the billionaire class. Okay. Will all the media jumped on that and said Bernie goes after Elizabeth Warren with that tweet.

Where did he mention her name in there? Where did he talk about a policy that she doesn’t actually support? I know a lot of people say Medicare for all. She has now signed the TYT pledge of supporting Medicare for all. We’ll see if it sticks. I understand it, but here’s the thing. Elizabeth Warren and Bernie Sanders are the two most progressive people who have the best shot of winning the nomination. They may not be the most progressive in the race. Bernie, Bernie is more and maybe not, but she’s damn sure further to the left and most of them out there. And in terms of people who actually have a shot of winning the presidency, yes. She’s one of the two most progressive that has a chance in this thing. They’re not trying to tear each other down. Bernie Sanders has said plenty of times. I Love Elizabeth Warren. I think she’s great.

I think she does great work, but we’re both fighting for the same job here. But what the media is trying to do to these two is absolutely disgusting. Tear one of them down by making up a false quote, or at least trying to imply that he said this horribly sexist thing about Elizabeth Warren when nothing could be further from the truth. They’re trying to create turmoil where none exists. You want to go after a candidate, go after their policies, but don’t start making up fake crap just because you have nothing substantive to go after them on it.