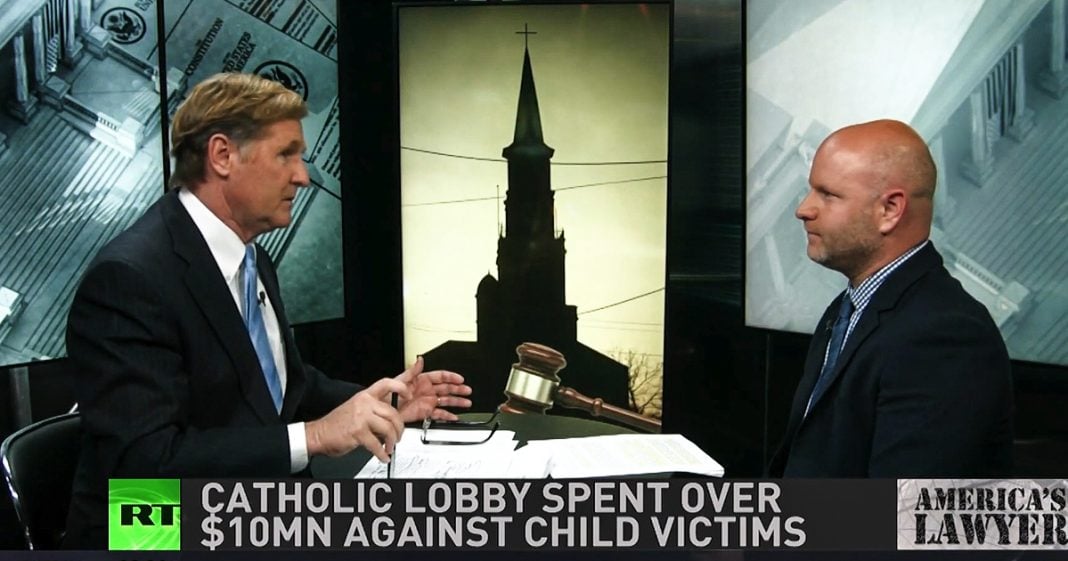 Via America’s Lawyer: Mike Papantonio and Trial Magazines Editor Farron Cousins discuss a new report showing that the Catholic Church has spent millions of dollars lobbying against the efforts to hold their own clergy members liable for molesting children.

Mike Papantonio:             A new report shows that the Catholic Church has spent millions of dollars lobbying against the efforts to hold their own clergy members liable for molesting children. You know, I look at this, I’m look at this story. Everyday you go to the newspaper when you see another molestation story and you hear the, you hear this, the same thing. Oh, we feel terrible about this as the Catholic Church. We apologize. We’re trying to turn a new leaf on this. We’re so sorry.

While they’re saying that they’re spending five, six, $7 million state by state, trying to make sure that the statute of limitations doesn’t change, so they’re old priest can’t be held responsible for, for going after little boys. I mean, and that’s that, that’s the Catholic Church. That’s this, that is this crazy culture, this, this, this, this cult like thing that we call the Catholic Church nowadays. We accept as a church. It’s a cult.

Farron Cousins:                  Well, you know, I actually would describe it more as a modern day corporation because their public face is saying, oh listen, we don’t want anybody to be harmed. We are absolutely going to take the right steps. We’re going to make this right for the people who are harmed. And then of course, behind closed doors, you know, with their checkbooks, they’re sitting their funding and lobbying to say, hey, all those rules we’ve broken, let’s not change them. Let’s not make it worse for us.

We’re still going to tell the public we’re, we’re trying to help and make things better. But just like a corporation will do, they’re still sitting there saying, hey, we got to get rid of these regulations. We don’t ever want to be held accountable. And that’s what they’re doing because right now you have these states, they want to change the statute of limitation from 23 all the way to 55 so suddenly you open up a huge area.

Mike Papantonio:             They did that in New York. The clergy, the Catholic Church, money came directly from Rome, by the way. You know that, those palaces that they have in Rome built with the gold and the marble and you might, you would think God lived there, you know. But the point is, the point is the money came from them directly to New York to beat back this statute that would have extended the right of a person to sue for a, for a, on behalf of a child who’s been raped, who has been sodomized and raped by a Catholic cult priest. And now you tell me, you know how that can be a bad thing to open the door. Let’s open the door. And when I hear them say, oh, we just feel so terrible, this is just awful. We, you know, we apologize. If you look at the number, it’s startling.

I mean, some of the numbers on here, if you just take a look at who’s, who’s doing all this. A hundred and about 150 priests. Hundred and 50 priests, were responsible for raping 3000 children. Okay. That’s, that’s the numbers that come out of here. Now, so we say, and then you start asking the question, where does all this come from? Where did we get this idea that a priest shouldn’t be able to marry? There’s not a word in the Bible anywhere. New Testament, old testament says anything about a priest not being able to be married.

Paul, you know, one of the Apostle Paul says, yeah maybe I’m not married and I get a lot done, but nobody says, hey, go to the top of a mountain, dress up in a damn Franciscan robe, drink beer, plant a garden, and diddle kids in the afternoon. That’s the kind of, that’s my, that’s my take on this as I look at it. This, this makes me furious. Farron, thanks for joining me. We’ll follow this topic, it’s going to continue.