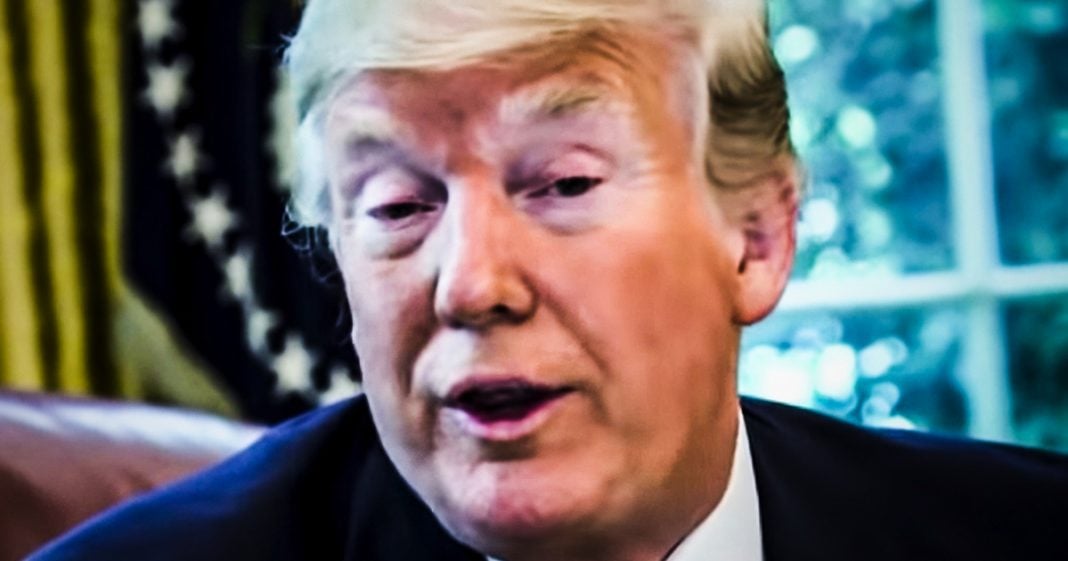 When Donald Trump fired his campaign’s pollsters earlier this week, there was one that was granted immunity. And it just so happens to be the single pollster who is cooking the books to make it look like Trump is actually winning in the areas where he’s struggling the most. Trump only wants to hear good news, even if it isn’t real, as Ring of Fire’s Farron Cousins explains.

Earlier in the week, the story broke and we discussed it at the time of Donald Trump firing his pollsters after they’re horrible poll numbers were released to the public in it showed us all what other polls have showed us, which is that Donald Trump as of this moment, and again that is going to change, but as of this moment, he has no chance whatsoever of becoming president again in 2020 but there is a caveat to that particular story. He didn’t fire all of his pollsters. He fired three of them. He kept one of them. A man by the name of John McLaughlin and McLauchlan has a bit of a reputation among Republicans. In fact, he’s got such a bad reputation among Republicans that he was actually blackballed by the National Republican Congressional Committee in 2014 they actually said nobody is allowed to hire John McLauchlan ever again, and the reason they said that is because John McLauchlan is an absolute liar.

He just makes up numbers. He is one of the worst pollsters to ever exist in the history of polling. He is an absolute liar who doesn’t know what he’s doing. But he tells his, uh, employers, the people running the campaign. He tells them everything they want to hear. And that’s why Donald Trump kept him on board. And this is not just speculation, you know, but here’s the thing. Uh, back in 2014, Eric Cantor, who was then the house, a majority leader, Eric Cantor, republican hired McLauchlan and McLauchlan was telling him, man, your poll numbers are great. He had him, he had him up in the polls by 34 points. Cantor ended up losing his primary by 11 points, but McLauchlan’s polls had them up by 34 and then he lost by 11. And they were all shocked. Same thing happened with Barbara Comstock. Oh, your numbers are so great, Ms Comstock, you’re going to wet.

Oh crap. You lost by double digits. Wow. My numbers were way off, weren’t they? Oops. That’s who John McLauchlan is. But he makes the candidates feel better. He gives them a sense of ease. He says, Hey, don’t worry about anything. You’re up by like 800 points. So you’re good. And that’s what Donald Trump wants to hear. He doesn’t want to be faced with the reality, which is that he is losing, I mean, God, the latest numbers from a a Quinnipiac in Florida, he loses to O’Rourke, to Buttigieg to Kamala Harris and of course Biden, Sanders, you know the big heavy hitters, but he is even losing to the people who have no shot at winning the nomination. That’s what’s so nuts about this. He loses to almost everybody, but he doesn’t want to see that. He doesn’t want to know about it. So he keeps around this McLauchlan guy cause McLauchlan is going to walk into his office and say, hey, you know those 17 swing states where you were losing to almost everybody.

Uh, I wrote down some numbers here that show that you’re going to win. What are these numbers based on? I don’t know. I just wrote it down here. They are. You feel better. Well yeah, actually I think I do great. We’re in business. That is the John Mc McLauchlan style of polling and that’s exactly what Donald Trump’s been wanting. He doesn’t want people to show him reality. He doesn’t want people to show him that he is in fact a loser. He wants somebody who’s going to walk into that office every day, tell him exactly what he wants to hear and kisses ass on the way out. That’s what Trump wants and it is going to be an absolute and utter disaster for him in 2020 and to that, all I have to say is long live. John McLauchlan, I hope you have a very, very good tenure working for Donald Trump up through the 2020 election.