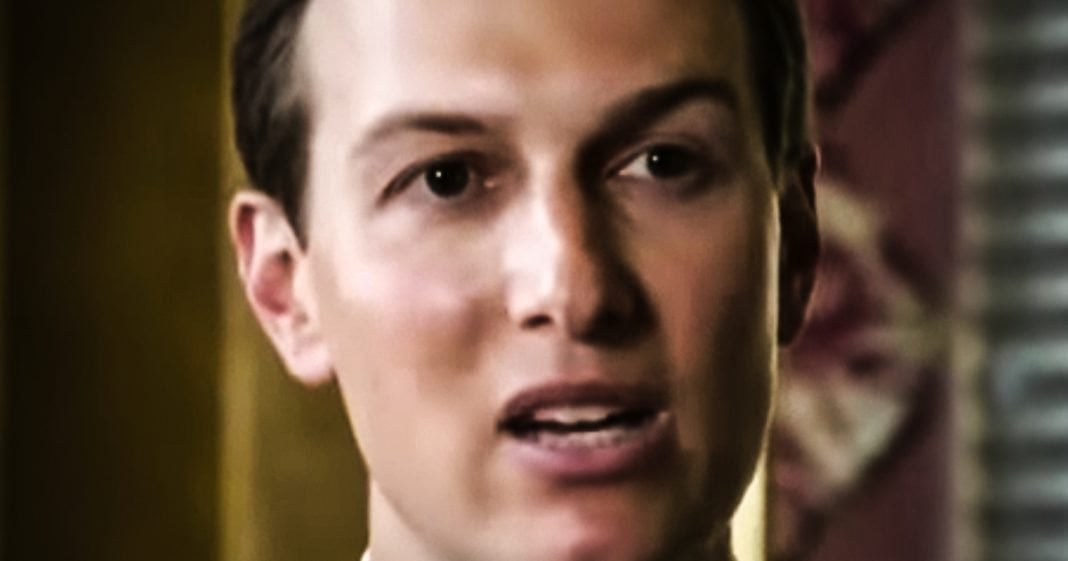 Jared Kushner, the husband of Ivanka Trump and son-in-law of the President, is now the target of a DOJ investigation looking into potential money laundering that occurred at Deutsche Bank. There are many transactions in and out of his account that had been flagged as suspicious, and the DOJ can no longer ignore the evidence that is right in front of their faces. Ring of Fire’s Farron Cousins explains what’s happening.

The US Department of Justice has announced that they have opened a criminal investigation into potential money laundering, a Deutsche Bank. Now this is not new. The DOJ opens up money laundering investigations all the time. It’s one of the few things they’re actually pretty good at doing, except this investigations a little bit different because this isn’t just, Oh, we’re going to get you for laundering money. This investigation also happens to target Donald Trump’s son in law, Ivanka Trump’s husband, and current White House employee that does God knows what Jared Kushner transactions. Those in his account and the accounts of Kushner companies are being targeted by the DOJ because they suspect that these accounts have been laundering money, specifically the DOJ, which again, by the way, is controlled by Donald Trump’s appointees. They believe that Jared Kushner, Kushner Companies may have actually been funneling money laundering money, I should say, uh, for wealthy Russians.

Now, there’s no indication at the moment that this has anything to do with the actual Russian government. So it’s not that kind of Russia story. It’s just wealthy people over there and maybe needed some money laundered and thought, hey, that Kushner guy seems like a moron. We could probably get him to do it and here’s the thing. Deutsche Bank had actually created these, a suspicious activity reports, but the higher ups at the bank refused to send them to the DOJ. That’s actually what has started this new criminal investigation, and I emphasize that word criminal because this is a criminal probe. This is not just, we need to look in maybe their suspicion of this. They’re looking to put people in prison. That’s what this probe is about, and Jared Kushner and his company are targets in it because they were two of the accounts that were flagged as probably laundering money, not just for wealthy Russians, but for other people in other countries as well.

Jared Kushner as it stands right now, is a suspected money launderer which only begs the question, why is this kid still in the White House? Why in God’s name is he still allowed to have a security clearance? Well, we know how he got it and he got it because Trump forced people to give it to them even though they said no, this guy is suspicious as hell. We don’t trust him. We can’t trust him. But Trump said no, give it to them anyway and now he’s suspected, suspected money launder part of a criminal investigation. There’s a good chance Jared Kushner depending on when this investigation concludes could spend many, many years in prison and if this investigation doesn’t do it, I’m sure one of the four other investigations into Jared Kushner might be able to do it. Maybe all of them together. Maybe we can just add on years and years and years to whatever prison sentence Jared Kushner inevitably receives as a result of all of the investigations into is shady and potentially illegal activities.

But as it stands right now, this suspected money, launderer has a security clearance. He can access top secret information. He can tell that information to anyone he wants. That’s technically not illegal, but that is exactly what the FBI was afraid he would do because he, they think he is too easily manipulated. Any is Mexico has said, Jared Kushner’s easily easy to manipulate Saudi Arabia. The UAE and other countries have also said that, yeah, Kushner would probably be the good conduit because he’s such a frigging idiot and I’m sure that those people who may or may not have been laundering money through Deutsche Bank and Kushner’s accounts thought the exact same thing.