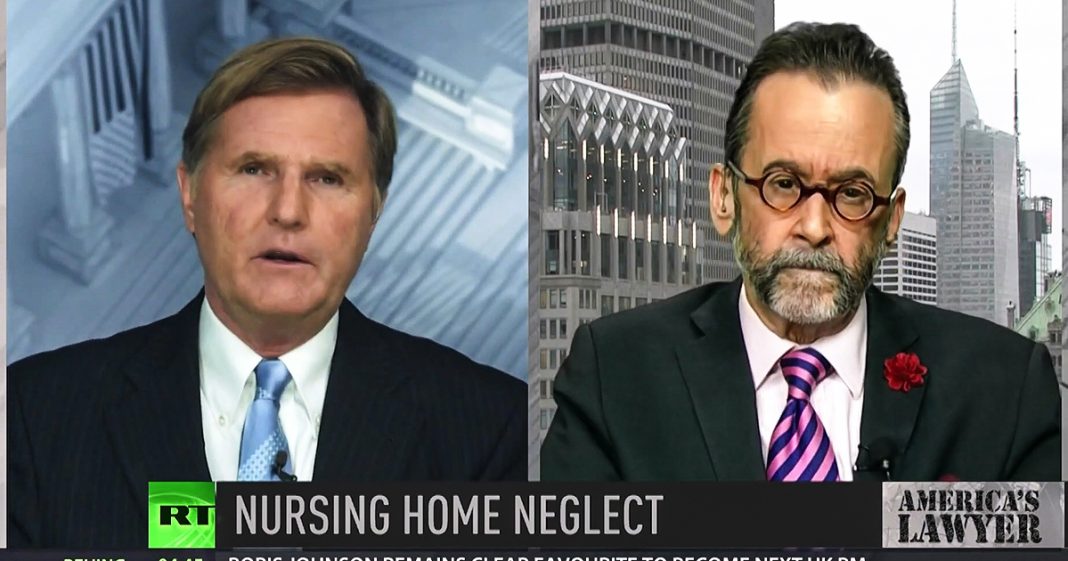 Via America’s Lawyer: Mike Papantonio is joined by legal and media analyst Lionel, to dive into an internal audit by the Department of Health and Human Services which details over 6,000 cases of nursing home abuse which went unreported in 2016, causing a spike in ER visits as well as Medicare expenditures which may very well have been preventable.

Mike Papantonio:             The inspector general of the Department of Health and Human Services released an audit last week. It points to over 6,000 cases of elder abuse in skilled nursing facilities that have been, had been unreported and underreported in 2016. This lack of accountability has created staggering costs from Medicare programs, meaning a greater economic burden to taxpayers and healthcare providers. According to the IG’s report, as many as one in five Medicare claims tied to high risk emergency room visits in 2016 were a direct result of unreported abuse or neglect suffered in nursing home facilities.

Joining me to talk about this right now is Lionel from Lionel Media. Lionel, let me ask you, this is, this is a topic people hear bits and pieces about, but they never really figured out who, who is responsible. First of all, for identifying and documenting abuses that occur in these skilled nursing facilities that go on, on and on year after year, the numbers continue to climb as baby boomers get older. Who is it?

Lionel:                                      Emphasis on, on unskilled, you know, what we need to do, Mike, I think is important, is to extend statutorily the definition of caregivers to make individuals who work at these facilities have an affirmative duty like teachers and caregivers to identify anything that should reasonably get their attention. And we need to get some type of an extension of the federal misprision laws and make it a crime for you to know that somebody was injured.

Know that somebody was raped, sometimes murdered by these weird psychological Munchausen’s by proxy and, and other forms of demented behavior and make them statutorily and criminally liable if they don’t turn in their fellow skilled caregivers. It’s that simple.

Mike Papantonio:             Hmm. Yeah. Beyond the obvious spike in emergency room charges that result from these abuses, you know, can prosecutors pursue any criminal charges for the failures to report as you’re, as you’re pointing out, they, that’s where we have to begin. We have to have legislation that says the failure to report begins in house. But here’s what, here’s what everybody’s missing. Here’s what everybody’s missing about this. What these, what these facilities do is they pass on all the horrible things they do or fail to do to tax payers.

It’s called externalizing costs. In other words, they have a patient that requires emergency care. They, end, end of life kinds of problems that are caused in house. And the problem is taxpayers pick up a lot of this because they’re paying for a lot of these costs. It’s not the facility that should be on the hook. It ends up shifting that responsibility over to taxpayers, doesn’t it?

Lionel:                                      It does. And the inherent irony of these citizens, in fact, many of these have already been taxed by virtue of Medicare in the first place, and other forms of, of, of guarantee payment. But to think that we have to pick up the tab for greater exacerbated injuries from a skilled caregiver. You know, not only this Mike, but throughout, I’m familiar with prosecutors and individuals and trial lawyers who have gone after not only this case, but the weird, the avenging angels, the Munchhausen’s by proxy. That the, this, this is very quiet.

You’ve got these strange nurses. Sometimes they’ll want to play God. And then when you warehouse these people and you hire very sub par staff, and let’s face it, nobody looks to working sometimes in a, some of these facilities, which God bless these people. They, most of them, 90% of them are great. But when you have these folks, these sometimes annoying old people that sometimes have forgotten and you are in this facility every day, you know, this is bound to happen.

Public has to be more aware of this. And by the way, just peruse. Go online and look at all of the plaintiff’s lawyers who are handling this particular area. If you don’t think this is a burgeoning area of concern, just look at the number of people and the incredible settlements that the, that the plaintiff’s bar thankfully has brought to the public attention.