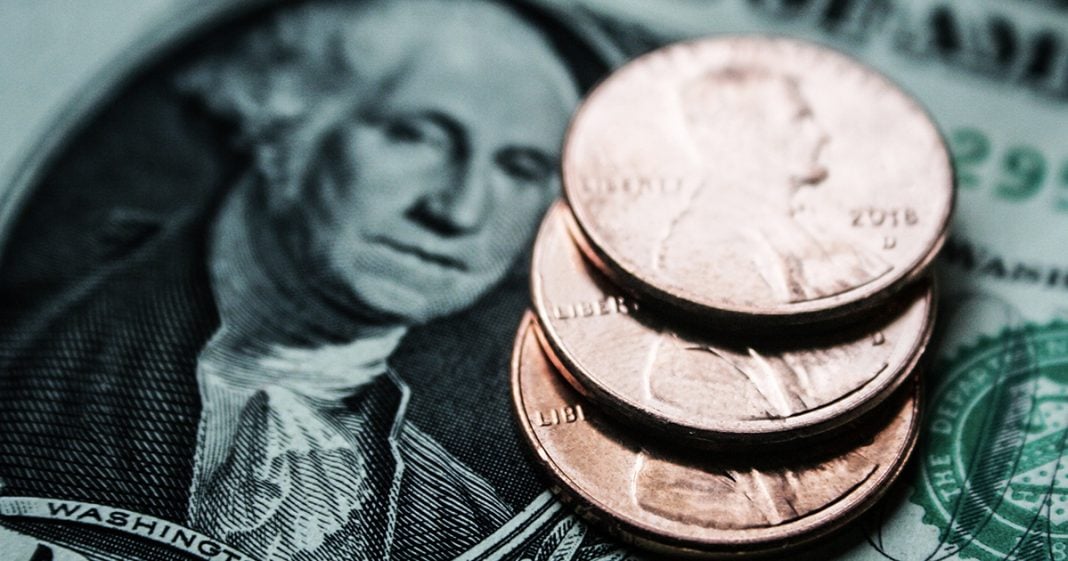 We have now entered the longest span in American history, since minimum wage laws were established, since that wage has risen. It has now been just a few days shy of a decade since the federal minimum wage was raised to $7.25 an hour, a paltry wage that is guaranteed to keep people living in poverty. During this same time, the balance of power has been solely in Republican hands, meaning they are the ones who have ignored this issue. Ring of Fire’s Farron Cousins discusses this.

We have now entered the longest stretch in American history since the veteran minimum wage was established. This is the longest period in history since it has been raised, and guess what folks, up until January of this year, do you know who controlled Congress during that entire period with obviously the exception of 2009 when it went into effect? That’s right. Republicans, Republicans have been calling the shots in DC since then. There are the ones who have refused to bring this to a vote, but don’t get me wrong. Oh, there is plenty of blame to go around for some Democrats there too, because right now there’s actually proposals in Congress to raise the federal minimum wage to $15 an hour. And aside from not being supported by Republicans, there’s also plenty of centers, Democrats who have expressed out saying, I don’t know that this is something we need to do.

I mean $15 an hour, he maybe back it down a bit. So let’s be totally clear here. This is an issue that both Democrats, the centrist corporate is types and all Republicans have failed on. And it’s not just failing to pass legislation, it’s failing American families. It’s failing the working class here in the United States. That’s who they’re really failing. And those are the people that need the most help right now. And Congress at this point are the only people who could actually help them. Yet they refuse to do so. They understand that you can’t get by in this country on $290 a week. You cannot support yourself. And you damn sure can’t support a family on $290 a week. That is virtually impossible. And again, that’s actually pretax income. You can’t do it, and yet that is exactly what they’re telling us because when this increase went into effect on July 24th two $907 and 25 cents even back then was crap. But it’s the best we could get, I guess. But $7 and 25 cents back in 2009 actually bought more than $7 and 25 cents in 2019

Buying power has diminished show as horrible as $290 a week before tax was in 2009 it’s so much worse in 2019 and Congress still isn’t doing anything about it. Most of that has to do with Republicans not wanting to increase the minimum wage, but some of it also has to do with those centrist Democrats saying, no minimum wage workers shouldn’t get $15 an hour. That’s absurd. No, what’s absurd is living in supposedly the wealthiest country on the planet, right? The best country on the planet, and we’re sending people straight into poverty by refusing to increase the minimum wage. This is an easily fixable problem. It is a problem that would have huge economic benefits throughout this country. When you have people who spend 100% of their paychecks and you increase their paychecks, they still spend 100% of it folks. It’s just now, every now and then, God forbid they might be able to actually go out to eat at a restaurant. And I bring that up a lot because let me tell you, when I was in college and even when I was first starting out after college, it was years, not kidding, years before I even had enough money to do something like that, to go with a group of friends to Chili’s,

That that’s how much I struggled. And it’s not just me. There’s millions of people in this country who were going out to a casual chain. Dining restaurant is a luxury they can’t even afford. And that’s what Congress says. You know what? Okay, whatever. We don’t care. But guess what, folks? Every time you go to that restaurant, you pay them $10, $15, $20 for your chicken fingers. That’s putting money in the economy, that’s giving a server a tip that they can then go out and spend. I didn’t have enough money. I got, I couldn’t tell you how many years I went before I was able to change my oil in my car. And those are the kinds of things that poor people would be able to do if you just increase the minimum wage. And every single one of those things puts more money back out into the economy. And I know because I was there, I’m not even too far from being back into that right now, folks. But that’s a story for another day. The important thing here is that Congress for 10 friggin years has looked at struggling Americans and said, you know what? This seems fine to me. And that is absolutely appalling.